Jasprit Bumrah blasted a Test-record 35 runs off one Stuart Broad over, before then tearing through England's top three; Watch day three at Edgbaston, live on Sky Sports Cricket, with coverage starting at 9.45am and play getting under way from 10.30am on Sunday Jasprit Bumrah lit up an otherwise gloomy Edgbaston with a dazzling all-round display on a damp second day of the rescheduled fifth LV= Insurance Test between England and India.

Interspersed among multiple rain breaks, Bumrah first took Stuart Broad apart for a Test-record 35 runs off one over before he then tore through England's top three as the hosts slipped to 84-5 by stumps, still trailing by 332.

Bumrah (31 not out off 16 balls) smashed two sixes and four fours off Broad, who also sent down a no-ball and had one delivery run away for five wides in the offending over that stirred memories of Yuvraj Singh's six sixes off him in the 2007 World T20. 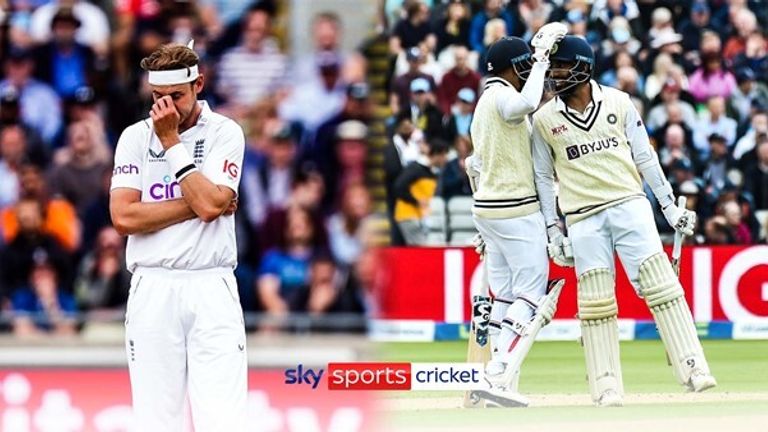 Ravindra Jadeja (104) had earlier gone through to a fine third Test ton before he was bowled by James Anderson (5-60), who claimed a 32nd Test five-for as he avoided the carnage at the other end and finally ended the Indian innings after a curious first hour in which England repeatedly bowled too short.

Broad claimed his 550th wicket in Test cricket, Mohammed Shami (16) caught at third man, with one such delivery banged in halfway down, but generally, India's tail feasted on the ploy, none more so than Bumrah as the stand-in skipper blasted his team beyond 400 in explosive, record-breaking fashion. 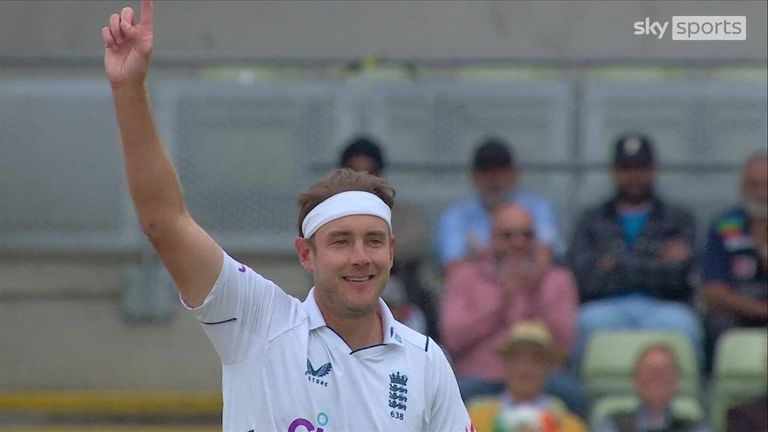 England's batters struggled for any sort of rhythm with the weather disrupting their innings on three separate occasions and, following the final downpour of the day, the red-hot Joe Root (31) was the fourth to fall as he gloved behind a brutal delivery from fast and fiery Mohammed Siraj (1-5). 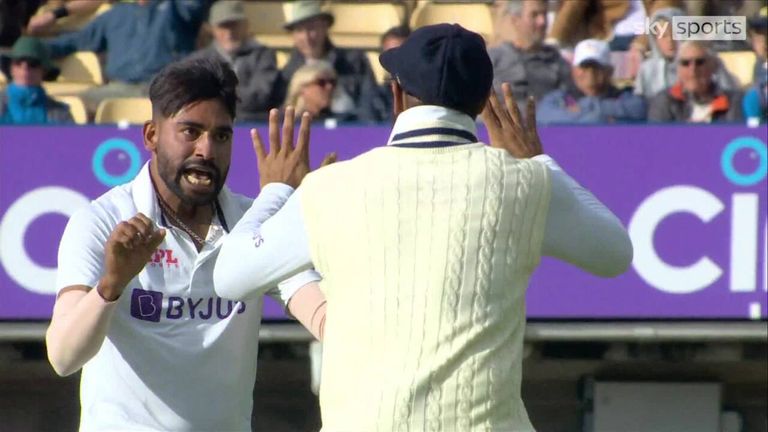 Shami (1-33), meanwhile, remarkably claimed just the one wicket, nightwatchman Jack Leach (0), despite an epic 13-over spell - aided by the numerous breaks in play - in which he repeatedly beat the bat of the England batsmen.

Jonny Bairstow, curbing his attacking instincts that have so flourished in the new 'Bazball' era, used up 47 deliveries to be 12 not out overnight - England's fading hopes of winning the Test and drawing the series firmly lying with him.

Bumrah blasts Broad for record 35 in an over!

Rain had very much been forecasted for the morning in Birmingham but was late arriving, allowing Jadeja - 83 not out overnight - to breeze through to his hundred, off 183 balls, with a couple of flashes of his blade and his usual flourish of the bat in celebration. But it was England's tactics at the other end that were most curious, setting the field back for the tail as they targeted them with some telegraphed short-pitched bowling that they were only too happy to pummel to the boundary - 78 runs added in just 11.5 overs.

Eventually, it proved Shami's undoing, while Jadeja was cleaned up by Anderson soon after the second new ball was taken, only for Bumrah to then blast Broad to all parts. 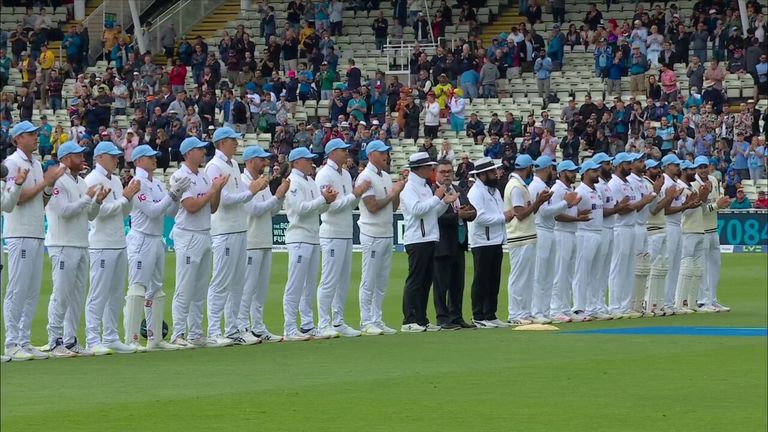 A top-edged four that just escaped Crawley's grasp at fine leg was followed by five wides off a wild bouncer and then seven as Broad overstepped and Bumrah this time sent his top-edge into the stands.

It meant that Broad had at this stage already conceded 16 runs off just one legal delivery. That conceivably could have been 21 off one as Broad was fortunate not to have his next, an above-waist-high- full toss swatted for four more, called for another no-ball.

Two more boundaries followed - one rather fortuitously inside-edged down to fine leg and the other fired through midwicket - before Bumrah broke the previous record of 28 in an over jointly shared between Brian Lara, George Bailey and Keshav Maharaj with the best of the bunch, a glorious wristy pull for six.

Bumrah scrambled a single off the final ball of the over, with Broad cleaning out the stumps just to add to the carnage, while Anderson's 32nd Test five-for - claimed in the next over as Siraj (2) skied one to mid-off - was almost lost in the shuffle. Bumrah then followed up his batting brilliance with an even better spell with the ball, although the wickets of Lees and Pope were perhaps somewhat fortuitously picked up off bonus deliveries after ending each over with a no-ball.

Lees was bowled on the stroke of the first rain delay, beaten by Bumrah's extra pace, while the desperately out-of-nick Crawley failed to adapt to the conditions presented on the restart, out on the drive again, nicking to third slip, as the ball began moving considerably off the deck. It left Bumrah on a hat-trick and though Root (only just) survived, somehow failing to edge a ripper of a delivery first up, Pope eventually became his third victim - another loose drive edged to the slips - following a further, longer interruption.

Root, not concerned by the failings of those before him, played and missed with a couple of expansive drives off Shami either side of the final break of the day, while he also flashed four away over the slips.

The pressure eventually told, with Siraj picking up the former England captain with a vicious ball that he fended clear of his throat to Rishabh Pant behind the stumps, while Shami was finally rewarded for his efforts as Pant pouched another to see off Leach.

Watch day three of the rescheduled fifth LV= Insurance Test between England and India, at Edgbaston, live on Sky Sports Cricket on Sunday. Coverage starts at 9.45am with play getting under way at 10.30am.