Pakistan took England's final three wickets in six balls in a thrilling finale to seal a dramatic three-run victory and level their T20I series at 2-2.

Mohammad Rizwan's 88 from 67 balls helped Pakistan post 166-5 after the hosts had been put in to bat by Moeen Ali, before England embarked on a run-chase that saw huge swings of momentum.

Liam Dawson appeared to have put England on the brink of victory as his 34 from 17 - including five successive boundaries in the 18th over - left the tourists needing five runs to win from the last 10 balls, with three wickets in hand.

However, Haris Rauf (3-32) removed Dawson and Olly Stone with consecutive balls in the penultimate over, before Reece Topley was run out in the final over to leave Adil Rashid stranded and England all out for 163.

England, whose batting had impressed in the opening three games of the series, appeared to be clear favourites after a strong bowling display had limited Pakistan to what the tourists clearly considered a highly gettable target. 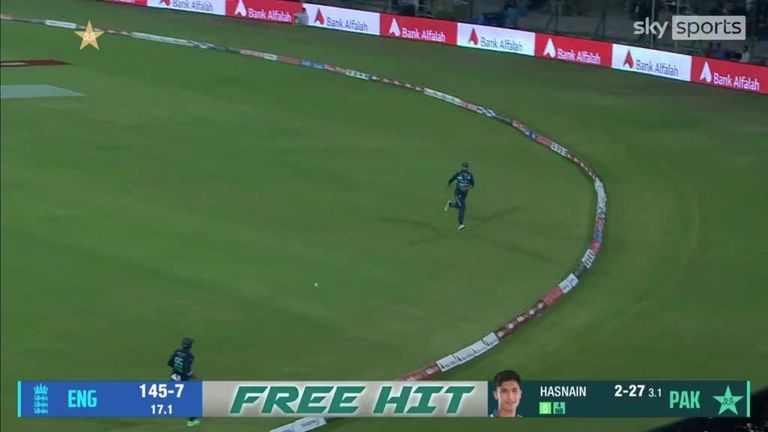 However, a disastrous start to the run-chase saw England slump to 14-3. Ben Duckett (33), Harry Brook (34) and Moeen (29) led the recovery, but when the latter duo fell in successive overs to leave England 113-6, Pakistan once more appeared in control.

Dawson's stunning cameo then appeared to have turned the game back in England's favour, with home fans beginning to flock out of Karachi's National Stadium as they accepted defeat, before Pakistan's late salvo created the most memorable of finishes.

The victory means Pakistan have now twice levelled from behind to ensure the series is level as it moves from Karachi to Lahore, where the final three matches will be played as both sides continue their preparations for the start of the T20 World Cup in Australia next month. Highlights of the fourth T20 match between England and Pakistan

Moeen, continuing to captain England as Jos Buttler recovers from a calf injury, won his third toss of the series and opted to field first, despite England having made 221-3 when batting first in the third game of the series on Friday.

They took Pakistan to 92-0 after 11 overs, becoming the first duo to pass 2,000 runs as a partnership in T20Is, and joining India's KL Rahul and Rohit Sharma as the duo with the most scores (14) of over 50 together.

The partnership wasn't quite as fluent as the spectacular stand thaw saw them chase down 200 without loss to win the second game of the series, but it was impressive, particular from Rizwan. 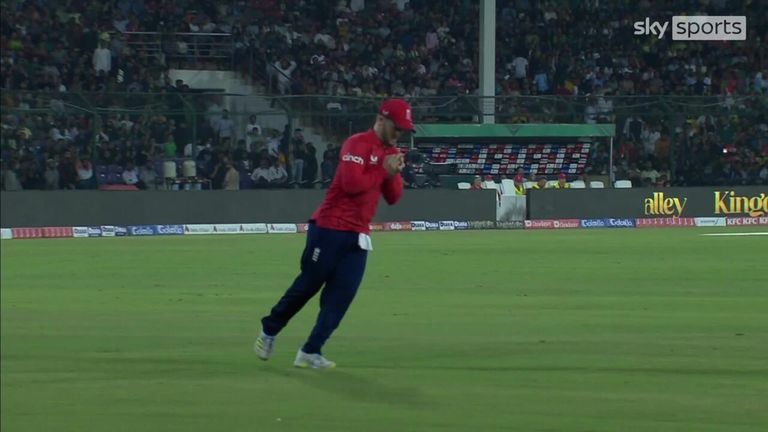 England get the breakthrough as Babar Azam is dismissed

Unlike on that occasion, England's star bowler Adil Rashid was able to slow the run rate with a probing spell, and the pressure eventually told as Babar was out trying to up the ante, caught on the boundary by Ben Duckett off Dawson's (1-31) bowling.

That dismissal exposed Pakistan's much-talked about middle-order, which once more failed to impress, at least until the very end of the innings.

Shan Masood struggled to 21 from 19 balls before he was lbw to the returning David Willey (1-31), while Khushdil Shah only added two runs before being caught by Moeen off the impressive Topley (2-37).

Rizwan, who largely struggled to strike the ball as purely as he had managed to earlier in the series, couldn't quite push the run rate on to the degree he would have liked, and was caught out off the next ball to give Topley two wickets in as many deliveries. 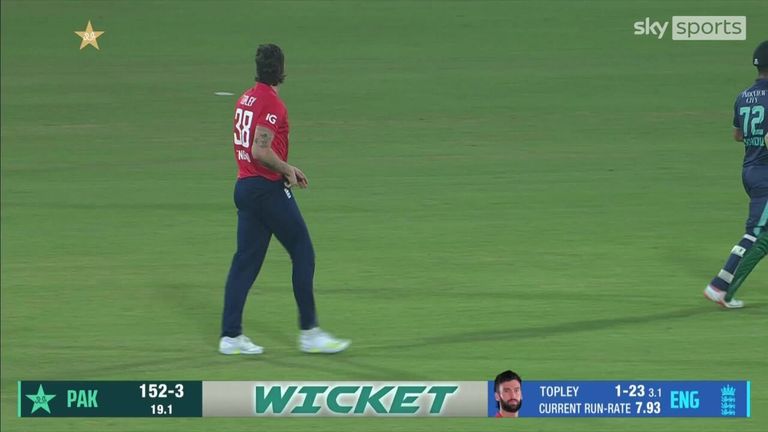 That brought Asif Ali to the crease for his first appearance of the series, and with the crowd chanting his name, he struck Topley's hat-trick ball for six, before adding another maximum from the final ball of the innings, adding crucial runs for his side.

Olly Stone, who became England's third T20I debutant of the series, struggled to make an impact as he returned figures of 0-36.

England's run-chase started as it would go on, in dramatic fashion, with Phil Salt (8) hitting two boundaries from the first three balls of Mohammad Nawaz's opening over, before being caught on the boundary as he went for another big hit.

Alex Hales, returning after being rested for the previous game, followed in the second over as he was brilliant caught for five at short mid-wicket by Usman Qadir off Mohammad Hasnain.

Before the second over was complete, England were three down, as Will Jacks, who had been so impressive on debut, was bowled trying to slog a good-length ball into the leg side. 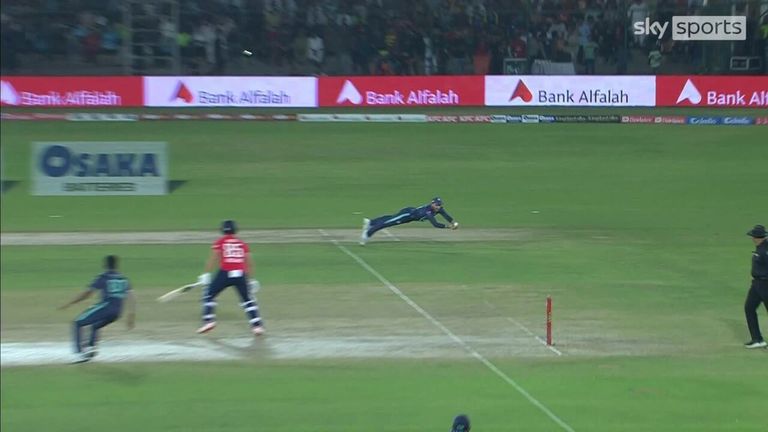 That meant England's heroes from the last game, Duckett and Brook, were reunited, and the tourists appeared to have been given a major reprieve when the in-form Brook was dropped on four by Nawaz off Rauf.

The pair managed to bring England back into contention, but Pakistan were this time able to break their partnership, as Nawaz somewhat redeemed himself by trapping Duckett lbw.

Moeen joined Brook, and with the run-rate manageable, they largely batted patiently aside from the 10th over when they both hit sixes off Nawaz.

England were edging into a position of parity as they passed 100, but then Ali was bowled by Nawaz and Brook caught off Mohammad Wasim in successive overs, leaving them 113-6 without any recognised batters remaining. 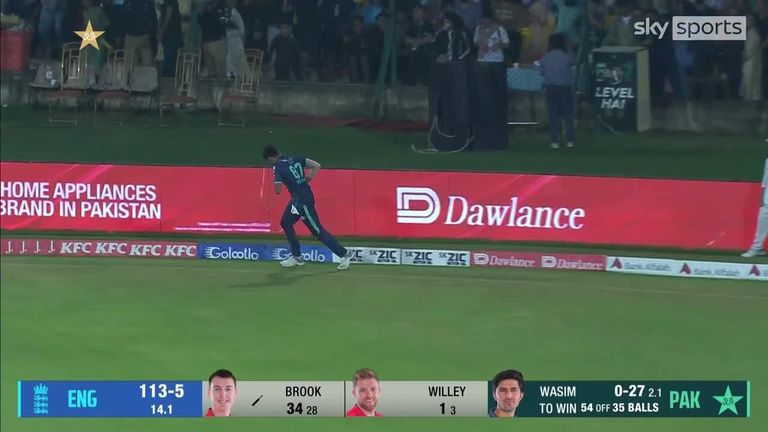 The challenge stiffened when Willey was bowled by a brilliant Rauf yorker in the 17th over, leaving spin bowlers Dawson and Rashid needing to score 37 runs from the remaining 21 balls.

However, the game would turn in the 18th over as Dawson hit Hasnain's first delivery for six, before adding four successive fours, one of which came from a no ball.

Dawson retained the strike with a single off the final ball and then hit the second ball of the penultimate over for four, leaving England needing just five runs to win with 10 balls remaining.

However, perhaps unsure whether to continue attacking or to bat with slightly more caution, he miscued to sub fielder Mohammad Haris at mid-wicket, giving Pakistan hope. 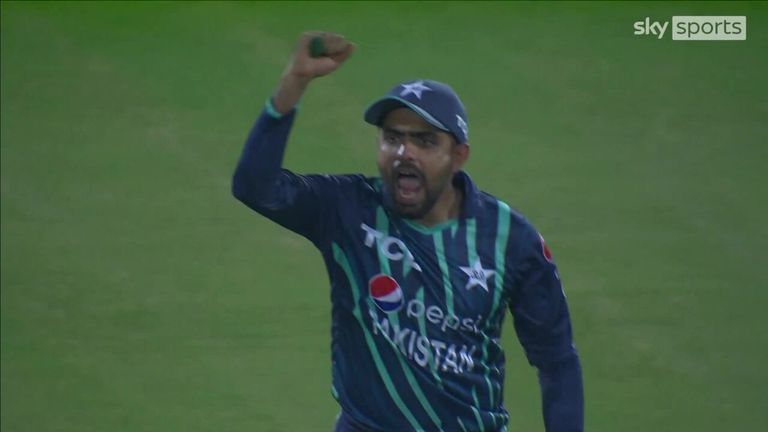 Rauf rose to the moment, bowling Stone with the next ball, before conceding just one run from the final two balls to leave England needing four from the final over, with No 11 Topley on strike.

Topley considered a single from the first ball and thought better of it, but then crazily went for the run from the second ball after directing the ball straight to the fielder at short mid-on, Shan, who brilliantly kept his cool to execute the run out from close range.

There were wild celebrations for Pakistan, who now head to Lahore with plenty of momentum for the fifth encounter of the series on Wednesday.

Moeen: It was an amazing game

England captain Moeen Ali: "I think it went both ways and it kept swinging. I thought the crowd were electric throughout the four games here, and it was an amazing game of cricket.

"We felt like we should have chased that down. Obviously we're disappointed we didn't, but we did lose a lot of wickets up top.

"We kept hanging in there and then Brook played really, really well. Then we lost another couple of wickets quickly. 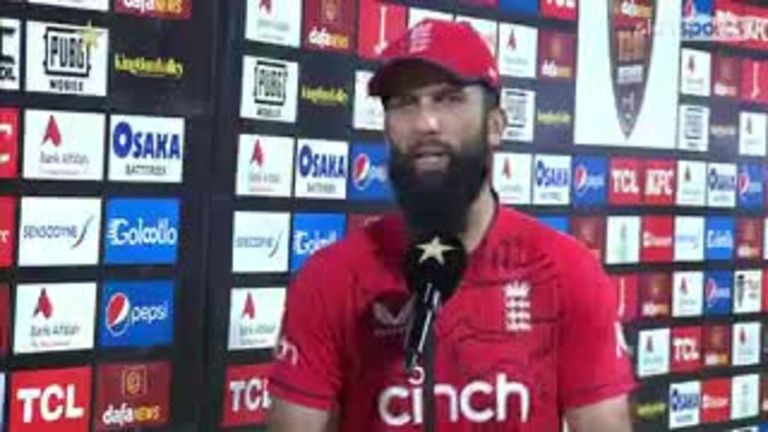 "Dawson, the way he batted tonight was outstanding. He had a brilliant game. I'm really pleased for him, sad that he couldn't get us over the line, but these things happen and he played really well.

"With nine runs needed with three wickets left, we feel like we should win that game, but it can happen, pressure happens.

"I actually thought they bowled really well. Both teams bowled well on that wicket and they managed to get over the line."

England head coach Matthew Mott: "Taking wickets in the powerplay put us on the back foot, it took a really good partnership to get us back in it.

"Liam's knock was special. It took everyone by surprise, we didn't think in our wildest dreams we'd get in that position. It just shows in T20 cricket you've never got it done.

"Haris Rauf was put under pressure [in the 19th over] and he bowled his side to victory."

The series now moves to Lahore for the final three games, with everything to play for.

You can watch the fifth meeting between Pakistan and England live on Sky Sports Cricket on Wednesday at 3.30pm, with build-up from 3pm.