England make mincemeat of target of 170, with Phil Salt smashing 88no from 41 balls as tourists cruise to victory with 33 balls to spare; Sunday's final fixture a series decider; Babar Azam's 87 not out from 59 balls in vain for Pakistan on day he passes 3,000 T20I runs Phil Salt blasted 88 not out from 41 balls as England brushed off their recent batting failings by cruising to a target of 170 in the sixth T20 against Pakistan and making Sunday's final fixture a series decider.

England had seen a 2-1 lead in the series turn into a 3-2 deficit after two bungled run chases in games four and five, but were brutal batting second on Friday night, with Salt the spearhead as they cantered home with 33 balls to spare to win by eight wickets and level proceedings at 3-3.

Salt, who rushed to his half-century from just 19 balls, bludgeoned 55 from 23 deliveries with opening partner Alex Hales (27 off 12), the fifty stand coming up after just three overs as Mohammad Nawaz, Shahnawaz Dahani and Mohammad Wasim were pummelled for a combined 10 boundaries.

Salt continued to pepper the fence after Hales was caught off Shadab Khan in the fourth over, with his pulsating innings containing 13 fours and three sixes and perhaps even pushing him ahead of Hales in the battle to open with white-ball skipper Jos Buttler at next month's T20 World Cup.

The Lancashire opener pulverised Pakistan, dominating a second-wicket stand of 76 from just 34 balls with Dawid Malan (26 off 18) as he rebounded from single-figure dismissals in his previous three innings.

Salt clinched England's victory in the company of Ben Duckett (26no off 16) - Malan having been pinned lbw by a delivery from Shadab that shot along the ground - as the tourists made mincemeat of Pakistan's 169-6 and rendered home skipper Babar Azam's supreme 87 from 59 balls in vain.

Babar played quite beautifully after Pakistan were inserted by Moeen Ali, becoming the joint-fastest player, alongside India's Virat Kohli, to reach 3,000 T20 international runs, doing so in his 81st innings.

Babar reached the landmark with a sublime straight six off Richard Gleeson, one of three maximums he managed to go with seven fours in his 27th T20I international half-century - although the gloss of that achievement would have been taken off by his team's heavy defeat.

Babar fires for Pakistan as Curran impresses for England

Babar would have been run out for 24 in the sixth over had Sam Curran's shy at the non-striker's stumps been on target - a rare blemish for Curran on the evening as he proved the pick of the England attack with figures of 2-26 from his four overs and an economy rate of 6.50.

Curran accounted for Haider Ali (18 off 14) and Iftikhar Ahmed (31 off 21) with cutters after the batters had shared stands of 47 and 48 respectively with skipper Babar.

Gleeson did dismiss debutant Mohammad Haris for a skittish seven from eight balls during a slow start for Pakistan - Haris nailing one six but also hacking at deliveries after coming into the hosts' side at the top of the order in place of the rested Mohammad Rizwan.

Pakistan were 15-2 in the fourth over when David Willey (2-32) pinned Shan Masood lbw for a two-ball duck but Babar led the response with a tremendous unbeaten knock, with included a gorgeous six over extra-cover off a Willey full toss in the 17th over.

Pakistan mustered just 15 runs from the next 16 balls after that Babar six, during which time Willey had Asif Ali (9) pouched on the point boundary and Reece Topley (1-31) bowled a five-run 18th over.

However, Topley was then taken for 19 from the final over as Babar and Nawaz (12) hit two sixes and a four between them - Topley looking far from jubilant after having Nawaz caught at long-off from the final ball of the innings.

Topley and England were jubilant come full time, though, as Salt's swashbuckling innings ensured a winner-takes-all showdown at Gaddafi Stadium on Sunday night.

"Definitely [my best T20I knock]. It was nice to do it with the series in the balance. Very happy with the knock.

"It's always a challenge at the top of the order when you feel you're playing well but picking out fielders and finding ways to get out. 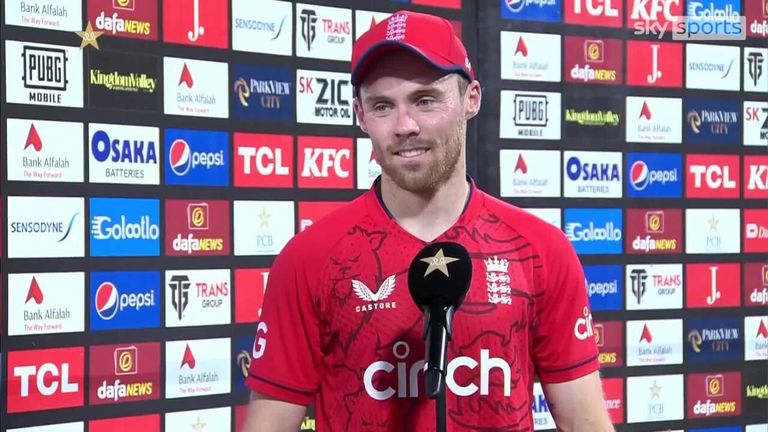 "I'm very grateful for the backing I've got from my team-mates and the management. It's very clear the way they want me to play.

"You need competition, the best sides in the world have that. You can't get away from that, and that's the same in every sport.

"Everyone's trying to put their best foot forward and show the coaches how good they are."

"I'm very happy. I thought the way we batted in particular was outstanding. We almost killed the game off straight away.

"It shows if you stick to the process, you don't have to slog, you can play proper shots. 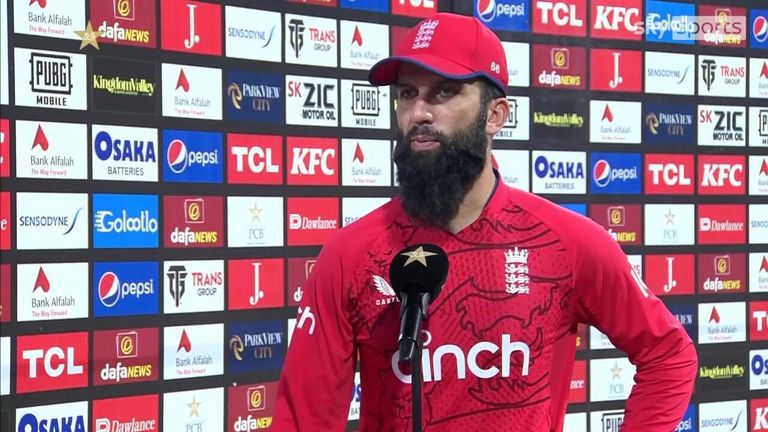 "It was a great start with the bat, but I actually thought the seamers were outstanding today.

"If you don't lose wickets early on, you can keep going, but tonight was really impressive.

"We had a good base, good shots, and that was a really impressive performance tonight from everybody.

"[I'm expecting] another good game hopefully [in the decider]. It's great for the series that it's 3-3, and it's been a brilliant series so far.

"We feel we've learned a lot about each other as a group players. We're looking for an exciting last game.

"He's [Buttler] feeling good, been training a bit more. Whether or not we risk him for one game, we'll see. I doubt it." "He [Salt] played brilliantly and because of it there was kind of an absence of tension there in that second half of the game.

"Throughout this series, we've seen very close matches, swinging this way and that and full of tension, but none of that tonight just because of how well Phil Salt played.

"He played absolutely brilliantly. Alex Hales helped him give England a rapid start and the game was done, really, after that opening power play.

"But very nice to see Phil Salt go on unbeaten and finish the game off for his best innings in England colours."

Catch England's seventh and final T20 international in Pakistan on Sky Sports on Sunday. Build-up begins at 3pm with the first ball at 3.30pm.

England then travel Down Under to prepare for the T20 World Cup, with three T20s against host nation Australia (October 9,12 and 14) and a warm-up against Pakistan (October 17) before Jos Buttler's side begin their World Cup campaign against Afghanistan in Perth on October 22.