South Africa were cruising to a revised target of 64 from seven overs, with Quinton de Kock powering to a quickfire 47 before the match was abandoned; Bangladesh claimed a nine-run win over the Netherlands earlier in the day

Quinton de Kock's blistering knock nearly handed South Africa victory over Zimbabwe, only for the teams to share the points after rain forced their T20 World Cup Super 12 match to be abandoned.

South Africa were comfortably chasing a reduced target of 64 off seven overs, after the match was already reduced to nine overs per side due to rain, and made an electric start with De Kock smashing 23 in the first over alone.

Play was briefly stopped due to rain but De Kock picked up where he left off, accelerating to a brutal 47 from just 18 deliveries, but the next interruption after three overs proved to be the final one with South Africa needing only 13 runs to seal victory.

Having elected to bat, Zimbabwe lost openers Craig Ervine (2) and Regis Chakabva (8) in the powerplay and were left reeling at 12-3 before the end of the third over after the in-form Sikandar Raza fell for a duck to Lungi Ngidi.

Sean Williams was run out (1) in the next over before the 53-run partnership between Wessly Madhevere and Milton Shumba brought some much-needed stability to a chaotic Zimbabwe innings and helped them post a competitive total of 79-5.

Madhevere top-scored with an unbeaten 35 off 17 while Shumba added 18 before being dismissed on the last ball of the innings, with Zimbabwe also awarded five penalty runs after the ball rolled into De Kock's wicketkeeping glove on the field.

Bangladesh got their T20 World Cup campaign off to a winning start by registering a hard-fought nine-run victory over the Netherlands in Hobart. 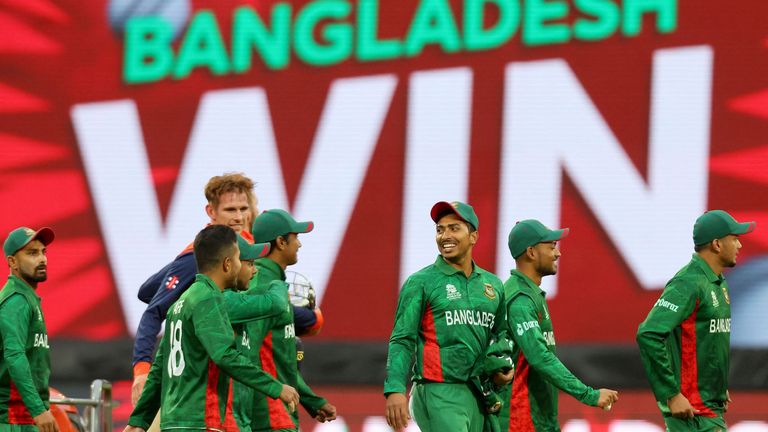 Bangladesh edged past the Netherlands, winning by nine runs in their first match at the T20 World Cup

Afif Hossain top-scored with 38 off 27 balls for Bangladesh, who posted 144-8, before Taskin Ahmed (4-15) took out Vikramjit Singh and Bas de Leede with the first two balls of the Dutch reply.

Two run-outs left the Netherlands on 15-4, although Colin Ackermann's 62 from 48 deliveries ensured they did not totally collapse before he became Taskin's fourth victim after being caught on the fence.

Number 11 batter Paul van Meekeren had an entertaining cameo of 24 off 14 balls - one of only three Netherlands batters to get to double figures - to give the first-round qualifiers a flicker of hope.

But with 12 needed from the last two balls, he was unable to clear the rope off Soumya Sarkar, who claimed the final wicket when Van Meekeren slogged to Litton Das at deep midwicket as the Netherlands were dismissed for 135.

South Africa face Bangladesh in Sydney on Thursday ahead of India playing the Netherlands on the same ground, while Pakistan take Zimbabwe in Perth, with all three matches live on Sky Sports.

In the other group, Australia go up against Sri Lanka in Perth on Tuesday as they look to bounce back from their heavy defeat to New Zealand in their opening Super 12 match. England's next match is against Ireland in Melbourne on Wednesday - watch live on Sky Sports Cricket at 5am.