"I am loving playing cricket at the moment - I'm bowling well, feel fit and want to keep playing as long as I possibly can."

James Anderson described becoming the sixth bowler to take 500 Test wickets as "surreal" - and now has Glenn McGrath's tally of 563 scalps in his sights.

Anderson bowled Windies opener Kraigg Brathwaite on day two of the third Test at Lord's to become the first Englishman to the 500-wicket milestone in his 129th match.

McGrath and Courtney Walsh (519) are the only other seamers to pass the landmark, alongside spinners Muttiah Muralitharan (800), Shane Warne (708) and Anil Kumble (619).

"It feels good," Anderson, 35, told Sky Sports. "It's still a bit surreal and I can't quite believe I've got this many wickets or played as much cricket as I have.

"I am loving playing cricket at the moment - I'm bowling well, feel fit and want to keep playing as long as I possibly can. If I can play for another couple of years I might get somewhere near [McGrath]."

Anderson's maiden Test wicket also came at Lord's, when he bowled Zimbabwe's Mark Vermeulen on debut in May 2003 en route to the first of 23 Test five-wicket hauls.

"I had a taste of international cricket early on and knew that was what I wanted to do - play for England," said Anderson, who moved on to 501 Test wickets by stumps after castling Kieran Powell.

"There were some dark times - I got injured and left out of the side but that made me more determined to improve. I knew I had some skills and I just tried to develop that.

"I love playing cricket, it's been my passion since I was kid, and playing for my country in Tests at Lord's is something that I wouldn't ever have dreamed of."

Reflecting on his 500th wicket, Anderson added: "I'm relieved more than anything to get it out of the way, so to get it early in this innings was a happy moment for me. 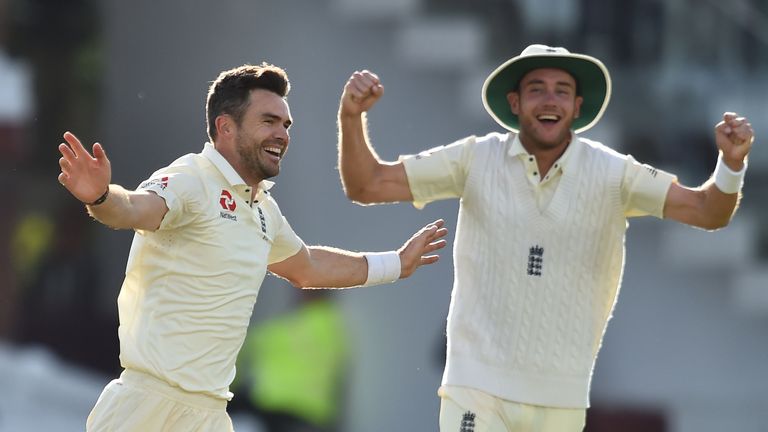 Anderson on his partnership with Stuart Broad

"I'd swung a few in the previous over so I thought I'd try a wobble and it nipped back down the slope. I head Nasser [Hussain's] wise words about pitching the ball-up so that's what I tried to do.

"Lord's is a special place for me - to get my first wicket here and my 500th here is something that will live with me for a long time. Having my family and friends in the crowd made it even more special."

Live coverage of the third Test between England and Windies continues on Sky Sports Cricket at 10am on Saturday, with a Marcus Trescothick Masterclass preceding the live action from 11am.

You can follow over-by-over commentary and in-play video clips in our match blog on Sky Sports' digital platforms.