Somerset and Lancashire tie in County Championship thriller at Taunton 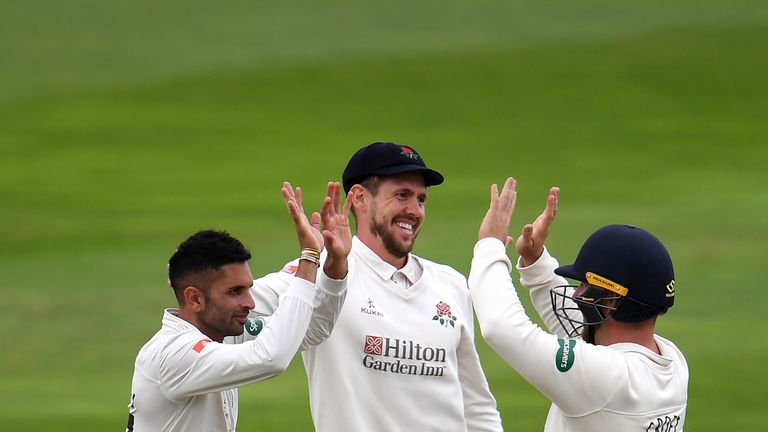 Lancashire left-armer Keshav Maharaj took seven wickets as his side snatched a dramatic tie in their astonishing Specsavers County Championship match against Somerset at Taunton.

Somerset seemed set for a routine victory after their own left-arm spinner Jack Leach had recorded 7-74 in the visitors' second innings of 170 to finish with career-best first-class match figures of 12-102.

However, Maharaj had Bess stumped with the scores level and then Leach, attempting to clinch the win, holed out in the spinner's next over as Somerset were all out for 77.

The tie - which was the County Championship's first since 2003 - dents Somerset's hopes of closing the gap on league leaders Surrey, but could prove crucial to Lancashire in their battle to escape the drop to Division Two.

Surrey, meanwhile, look well set to extend their lead at the top after forcing Essex to follow on at Chelmsford, with the home side going into the third day still trailing by 212 runs. SCORECARD

All-rounder Rikki Clarke hit 56 to lift the Surrey total to 351 all out in the morning before taking 4-28 as Essex were rolled over for just 126 in reply.

Tom Curran took 3-36 and Conor McKerr 2-40, while Tom Westley's 49 was the only score of note for Essex, who closed on 13 without loss second time around.

Former England batsman Gary Ballance hit his second century of the season to keep Yorkshire in contention against Nottinghamshire at Trent Bridge. SCORECARD

Notts posted 448 in their first innings, with the visitors recovering from a slow start to reach 258-4 in reply, courtesy of Ballance's 104 and an unbeaten 57 from Tom Kohler-Cadmore.

Kyle Abbott recorded a hat-trick as he bowled Hampshire to the verge of a crucial victory in their relegation battle against Worcestershire at New Road - with the visitors requiring just two more wickets when play resumes. SCORECARD

Having bowled their hosts out for 120, Hampshire then totalled 176 in their second innings - built around Tom Alsop's 64 - to set Worcestershire a target of 248.

The Pears struggled from the start and were hanging on at 120-8 at the close, with Abbott finishing on 5-35 after removing Joe Clarke, Josh Tongue and Ed Barnard in consecutive deliveries.

Stone (38) had earlier shared a ninth-wicket partnership of 86 with Chris Wright (54no) as Warwickshire totalled 310, with Durham reaching 224-7 in reply.

Bad weather at Canterbury frustrated promotion hopefuls Kent, with virtually no play possible as Northamptonshire added five runs to their overnight score to reach 76-8 in reply to the hosts' total of 137. SCORECARD

Ollie Robinson's five-wicket haul at Hove raised the hopes of third-placed Sussex as they eased into a commanding 340-run lead over Leicestershire. SCORECARD

Chris Jordan hit 68 in the Sussex first innings total of 373 and Robinson's 5-24 ensured that the visitors slid to 49-9 in reply before Callum Parkinson (48) and Mohammad Abbas (32no) provided some semblance of respectability with a last-wicket stand of 84.

Sussex opted not to enforce the follow-on and struggled as they reached 100-6 in their second innings, with Durham-bound Ben Raine and debutant Ben Mike taking two wickets apiece for Leicestershire.

Teenager Ben Charlesworth, making only his third first-class appearance for Gloucestershire, put them firmly in control against Middlesex at Bristol. SCORECARD

The 17-year-old finished with an unbeaten 77 as Gloucestershire were bowled out for 296 and then took 3-21 to restrict the Middlesex reply to 182-7, despite skipper Dawid Malan top-scoring with 62.

Derbyshire paceman Tony Palladino bowled his side into a winning position with figures of 6-29 against Glamorgan, who were set a difficult victory target of 302 at Derby. SCORECARD

Palladino ensured that the visitors were dismissed for 121 - a first-innings deficit of 130 - and, after Derbyshire had made 171 second dig, there was still time for him to take another wicket as Glamorgan closed on 16-1.