'Wearing Rainbow Laces in a show of support is so powerful'

Growing up in Adelaide, playing cricket was a lifeline for Lachlan Smith - and he's rekindled that passion at a club in Birmingham where he can be his authentic self

Lachlan Smith says playing regular cricket for a club that is LGBT-inclusive is "one of the best decisions" he has ever made.

This weekend, the ECB is again backing Stonewall's Rainbow Laces campaign, which is helping to 'make sport everyone's game' by raising awareness around LGBT+ inclusion.

There will be visible support for the initiative at Vitality Blast and Kia Super League matches, while players, officials, administrators, broadcasters and fans at all levels of cricket are being invited to get involved by wearing the laces and talking about the game's welcoming culture.

So what's cricket like for LGBT+ people? Sky Sports is giving athletes, coaches and others in sport who are lesbian, gay, bisexual and transgender the opportunity to share their experiences, discuss the challenges they face, and give their views on the progress that's being made on inclusion.

For the second of this weekend's series of cricket stories, Lachlan describes his journey from South Australia to the Warwickshire County Cricket League...

Growing up in Australia, it's hard to avoid cricket. Whether I liked it or not, it was always there in the background, and it permeated my life. It's part of Australian life and part of our national psyche.

My dad had always enjoyed the sport, as had his dad. I can't recall my father ever playing the sport himself but by the time I was aware of the sound of leather on willow, he was struggling with a brain tumour and a regime of drugs that impacted heavily on his body. I started to follow cricket and watched it on TV in 1986, when I was 10 years old. Eventually, my dad took me to the Adelaide Oval - still one of the world's great sporting venues - to watch South Australia play.

I was captivated, dreaming of playing cricket myself, dreaming of batting and making hundreds. I later took up cricket at high school and played for our third XI - I wasn't awful, but I was no world-beater. My lack of fitness (I was pretty overweight then) coupled with crippling shyness and lack of confidence meant I probably never gave myself the best chance to develop.

I was an awkward and shy teenager, so playing cricket was a big step for me - but I loved it. Despite my stomach squirming and rolling every time I took the field, I really took to the sport, eventually becoming a decent bowler for my level, and earning a reputation as a stubborn batsman.

My team at school was terrible - there's no other way to put it. We were the laughing stock of school cricket in our league. Getting thrashed was a regular occurrence, but I was always determined to do my best. I bowled my heart out in every match, sometimes with luck and reward, and I always prized my wicket when batting. I was often difficult to dismiss but never made many runs. I never really had the technique or confidence. Playing an attacking shot required a leap of faith I didn't have.

I played through my high school years in the parklands of Adelaide, sweltering in the Australian summer sun. During all these years, I knew I was different - although I never knew how to articulate it. Gay boys were almost nowhere to be seen, even though I was at an all-boys secondary school.

Being gay, even if not admitting it to myself let alone anyone else, made me feel awkward when it came to sports. I didn't like the changing rooms, the P.E. teachers, and the casual insults that flew around. But while I was in the closet, I could protect myself from those insults. I ignored them. I kept playing cricket, and it was my lifeline. I watched it all the time, but I wanted to play it even more. I wanted to improve, and it was a way of escaping and not acknowledging the fact I was different.

Courage to play - and come out

I've only really found my cricket home in the last few years. Following many years of dropping in and out of the game and feeling like it wasn't for me, I plucked up the courage to play again - and I'm so glad that I did. It's one of the best decisions I've made.

I'm lucky that I haven't had many directly negative experiences of playing cricket as a gay man, but it's fair to say that my sexuality kept me away from playing the sport after school. It just didn't feel like a natural fit. The total absence of role models and the perceptions that gay men are weaker and shouldn't play sport all fed into my insecurities, and made it easier to simply not play.

When I did finally start playing again, it took three years, at two different clubs, before I plucked up the courage to come out. Once I did though, it was a bit of a rollercoaster and before I knew it, the whole club knew. This, it turned out, was a really good thing, despite me being incredibly nervous about it. All club players, from the younger lads to other senior players and members who had long since retired, were great. My team captain was really supportive too, and all the captains I've played under since have been very inclusive. 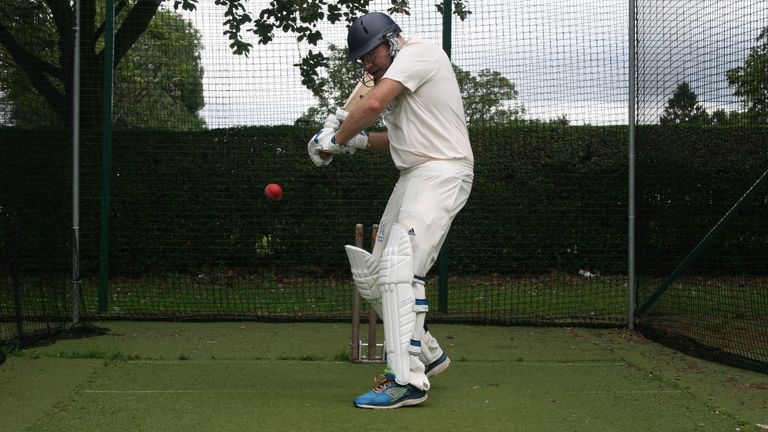 Playing in an environment where you're out and can be yourself... you bring your whole self to the game and your performances improve.

I was most surprised at the attitude of the younger players, who have all been encouraging and supportive. It suggests a changing of the guard, which is so positive. I hope it means it becomes easier for gay men or other LGBT people to play cricket in the future.

The handful of times when abusive comments have been said, they've been dealt with swiftly by team-mates and the club. Opposition clubs and captains have also apologised for those negative remarks. There are some words and phrases that I still hear sometimes, even if they're not directed at me, and these can be upsetting to hear - but things are improving. I try to educate, raise awareness, and challenge when I can, although it can be tiring when you're the only gay guy in the club.

I write a blog a few times a season, and this has helped me process things ranging from overcoming challenges related to my sexuality, as well as trying to work out how to bat! The blog has also been an incredibly useful way of opening up conversations at the club; quite a few members read it now too.

I've been encouraged by the ECB's support for Rainbow Laces in recent years. It had always felt before like cricket was a little behind the curve when it came to LGBT inclusion. Football, rugby and other sports seemed to take a more proactive role. I'm glad cricket is getting involved now - it's been really important to demonstrate inclusivity and acceptance of LGBT people in the sport. Although it's still early days, I think the campaigns have started to make a difference. I believe it's helping to lay the foundations for more LGBT people to get involved in cricket in future years.

At my club in south-west Birmingham, a couple of my team-mates have either started wearing rainbow laces or now have rainbow bat grips like mine, in a show of support. All team-mates have been supportive but I'm especially grateful to Josh, Jack, Simmo, Jason, Nick and Joe for all their support and encouragement. I can't tell you how powerful that is and what a difference it's made to me. It's helped to keep me in the game.

I think that people, my team-mates included, are now much quicker in calling out any abuse or comments they hear. It doesn't matter if comments are directed at me or not. Being backed by your team-mates is important in any team, but it's doubly important to any member of the LGBT community. It makes a huge difference and helps to stamp out any abusive behaviour.

One of the most important things about playing in an environment where you are out and can be yourself is the fact that you bring your whole self to the game and your performances improve. I noticed this after coming out and being accepted so unconditionally. I started to make some runs and realise my dream of opening the batting! 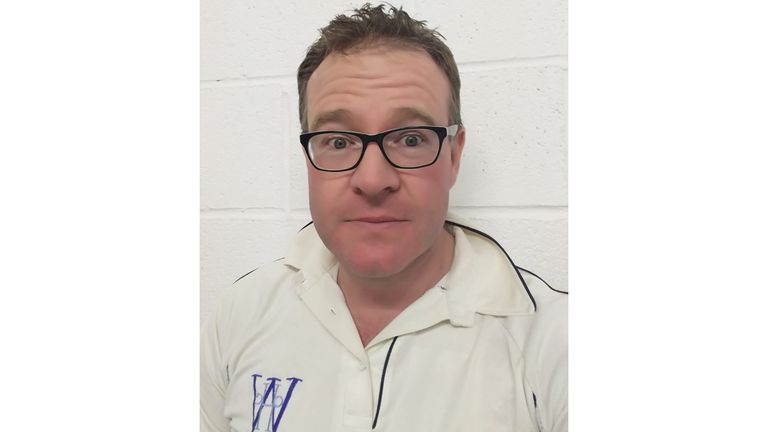 By being truly inclusive, cricket can ensure more younger LGBT people stick with a sport that's so rewarding to play.

Having a role model in cricket who was gay and out would have meant the world to me growing up.

I remember clearly when Steve Davies came out after the 2010-11 Ashes series. I was in my 30s by then, but it still had a huge impact on me. It was only afterwards that I even started thinking about playing cricket again, after a self-imposed absence of over 10 years. I never thought gay men played cricket, but here was an example of a gay man playing at the highest level. Although Steve played for England, and I was (and still am) an Aussie through and through, I've always kept an eye on his career and been glad when he's done well. He's been a tremendously positive role model.

Closer to home, I have lots of brilliant allies at my club - my team-mates are incredibly supportive and encouraging. They've also helped make my partner welcome at the club (even though he isn't a cricket fan!), and they always have my back when playing, and are there to commiserate when a match or performance doesn't go to plan. Most importantly, they help to pick me up off the floor when my confidence dips or my form seems to desert me.

'Be clear on LGBT inclusion'

Sports can be such a good way of making friends, improving your skills, and keeping you young, and team sports in particular encourage you to push yourself while enjoying the benefits of camaraderie. By being truly inclusive, cricket can ensure more younger LGBT people stick with a sport that's so rewarding to play - although it doesn't always feel that way when you're struggling with form! But being part of the team helps with that.

I know that inclusion in general is a feature of ECB Clubmark and other such initiatives, but it would be great if clubs or sports could be even more explicit about LGBT inclusion, especially when participation rates are so low - perhaps by being ambassador clubs, or something similar. I hope my experience can help pave the way for others too.

Story editor: Jon Holmes. If you're an LGBT+ person in sport and you'd like to share your story, contact Jon at Sky Sports, who are members of TeamPride supporting Stonewall's Rainbow Laces campaign.