Sky Cricket Podcast: James Anderson on form, fitness and if he fears failure

England seamer James Anderson has given a warning to Test batsmen by telling Sky Sports he feels in "as good a condition as I ever have".

Anderson, 37, took his 29th Test five-for against South Africa in Cape Town in January before a broken rib ruled him out of the rest of the series.

But the paceman is targeting a return in Sri Lanka in March and - during a stint as a Sky Sports pundit for Friday's rain-wrecked ODI between South Africa and England - suggested he has plenty more to offer in Test whites.

Download the Sky Sports Cricket Podcast here or listen in the player above for Anderson's thoughts on his fitness, form, role in the England dressing room and if he ever feared failure.

"I felt as good as I have for a long time in Cape Town. I didn't feel quite right at Centurion in the first Test. After an injury lay-off there is always that element of doubt in your mind of whether something is going to happen again, especially after the first Ashes Test with me pulling up after four overs. Once I'd built up that confidence, I hit my straps. I'm feeling in as good a condition as I ever have, as strong and as quick as I have for a long time. My lengthened run-up allows me to gradually build momentum rather than come in too quick. Even after playing all these years it's nice to know I still have something to offer. Five wickets away from home was special."

Role in the dressing room...

"We talk a lot about the game, trying to communicate in a bowling group is key, on and off the field, to try and help everyone understand what the team is trying to do and what we are trying to do a bowling group. If there are individual points along the way I will try to help if I can. Stuart Broad and I have a lot of experience and we try to pass that on. When I went out to South Africa early with Mark Wood, it wasn't just me talking to him. He is 30 years old, he has got experience. He'd lengthened his run-up before so I was tapping into that. It's not about me telling someone how to do something because I have done it for 15 years. I just want to add to someone's game if I can."

"Naturally there are going to be games where one of myself or Stuart doesn't play. Look at Australia last summer. They rotated bowlers quite a bit and that is something the best teams in the world can do. I'd hate [to be rested] but the coach and captain have the final say. They do what's best for the team. If I throw my toys out of the pram it is down to me and I how handle it! Because I don't play one-day cricket, I get enough rest naturally to be fit and available for most series and most games." 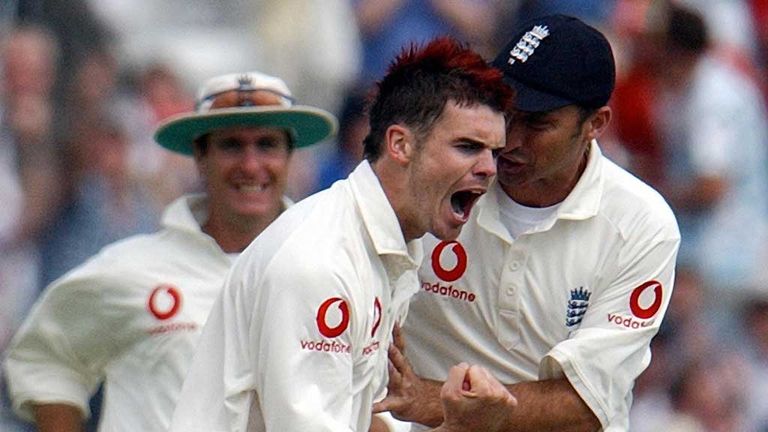 It was quite daunting but exciting at the same time. I remember thinking when I got my first box of kit ‘this is Christmas come early’. It was an absolute dream. I couldn’t quite believe it. The fact it happened so quickly helped me in a way as I thought ‘what happens, happens. I’ll just try to enjoy it while it lasts as it won’t last forever as we will have Darren Gough and Steve Harmison back soon and I’ll be out again’.

James Anderson on his England debut

"What you need in international cricket is someone who really knows the game and game-plans. You need to take 20 wickets to win a Test match so we need ideas and plans to execute that on the field. We have our own ideas as bowlers but when you have someone who watches the game and can help with that it's key. At Test level, you should know your action so you need the bowling coach to help with the finer details. If I disagree with something, I will definitely let him know as you want a plan that suits your strengths. My plans to a batsman will be different to Stuart Broad's, different to Jofra Archer's, so it's about chatting together, getting a general gist of how to get batsmen out and then the finer detail is the individual, such as what field they want."

"I do think you have to have fear of something to be able to push you to do well. Low moments can be difficult but for me, it was about having the drive. A taste of international cricket early on helped as I knew I could perform at that level. So when I was injured or dropped, it was just about getting fit. The other thing that helped was always having someone to talk to. Whether it was my wife, family members, friends, even team-mates - having someone to lean on and get through those low moments as you know if you work hard and get through, the high points can be amazing."

Anderson and Sir Alastair Cook will be our studio guests for Sunday's third and final ODI between South Africa and England in Johannesburg. Watch live on Sky Sports Cricket from 7.30am.