For two-thirds of the second day in Ahmedabad, Ben Stokes and James Anderson appeared to be leading England back into contention in the fourth Test only for Rishabh Pant's brilliance after tea to leave the tourists back where they started

Where did it all go wrong?

It is a question that is sure to be playing on the minds of the England players as, having enjoyed much the better of the first two sessions on day two in the fourth Test against India, they walked off at the close dejected and requiring a monumental effort to avoid a third straight defeat.

From working themselves into a position where they could realistically think about earning a first-innings lead, Joe Root's side are facing a deficit of 89 and counting.

Perhaps the most telling moment came in the last over before tea. India were six down, still trailing by more than 50, when Rishabh Pant went back to Dom Bess and was struck on the back leg. England went up in unison, but the umpire's finger did not follow.

The review was quickly taken, hitting in line and… umpire's call. A large portion of the ball was hitting the stumps but not quite enough to overturn the on-field decision.

It was as close as it gets, but that it was umpire's call shows it was not quite as plumb as some frustrated supporters might have you believe.

The tourists themselves had benefitted from an equally marginal decision earlier in the session when Rohit Sharma was given out lbw to Ben Stokes - on that occasion umpire's call on both impact and hitting the wicket went in England's favour.

What is clear, though, is the impact that that marginal call has had on this match. Bess, who had struggled even as the other bowlers excelled, missed out on a confidence-boosting wicket while Pant survived and went on to score a brilliant hundred.

However, to reduce such an absorbing day of Test cricket to the outcome of a call that could have gone either way would be to do the players involved a great disservice.

Pant will quite rightly take the headlines but one of the things that made his innings all the more remarkable was the situation he was in - and that was due to the England bowlers.

It would be easy to focus on the evening session in which a flurry of runs saw the visitors' hopes melt in the Ahmedabad heat and be critical of the bowlers, but without their efforts, particularly before lunch, there would have been no hope at all.

With only 205 on the board, discipline was the name of the game and in Jimmy Anderson, England had the perfect man to lead the way.

His line and length were immaculate, as borne out by 11 maidens in his first 15 overs, and there was just enough swing on offer to ensure he remained a threat as well - his delivery to remove Ajinkya Rahane in the final over of the morning session the perfect illustration as the ball swung away late from a fourth stump line to take the edge.

Jack Leach, too, continued his good form, showing the consistency that was asked of him prior to the series, building pressure and snaring the wicket of Cheteshwar Pujara for the fourth time in the series before adding that of Ravichandran Ashwin before tea.

Then there was Stokes. Having been used sparingly with the ball for the first three Tests, he was now the second of only two seamers in the XI. 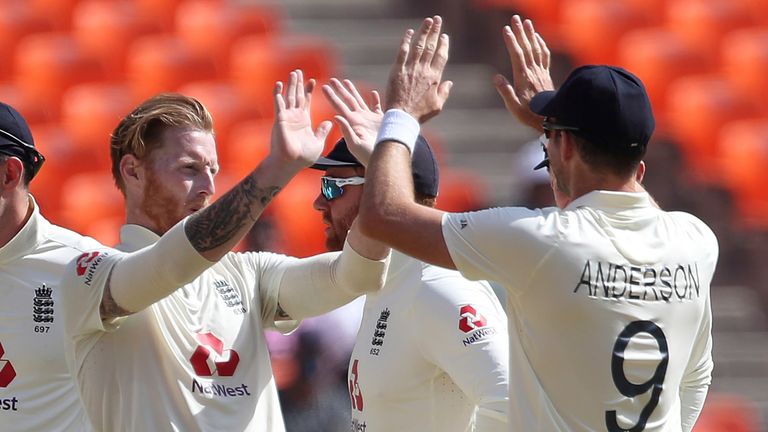 “Going in with two seamers and with Bess really struggling, England were effectively a bowler down. Stokes and Anderson were outstanding – I have never seen efforts like that in that heat. At one stage between them they had bowled 30 overs and had taken 4-37. Fitness, skill – they were outstanding."

The decision to go into the match with just two seamers may well be the answer to the question posed up front and England are surely regretting that decision now - but certainly not because of Stokes.

Even putting aside his two wickets - a snorter to Virat Kohli that reared up to take the edge and a big inswinger to get rid of Rohit - he was excellent. The sight of him charging in ball after ball, over after over, making things happen almost through sheer force of will brought back memories of his lung-busting spell at Headingley in 2019 to set up that innings - only this time he was doing it in sweltering Indian heat.

It was a superhuman effort, even before you consider that he is suffering with a stomach bug and his availability to bowl is being taken day by day.

No one could fault the effort of that trio as England reduced India to 80-4 and 146-6. With Bess looking shorn of confidence and unable to provide the sort of control required, though, they all racked up a lot of overs in gruelling conditions and some kind of drop off was always likely.

When it came, Pant was waiting.

A staggering innings by Rishabh Pant - he attacked 34 per cent of his deliveries in that innings, the lowest for any of his three Test centuries. It was also the highest false shot percentage for his Test tons - but he scored the quickest, at 5.1rpo. Risk-laden, but destructive.

The 23-year-old left-hander has established himself as one of the most exciting, explosive batsmen on the planet but this innings was built on patience, sticking it out through the afternoon session as England pushed for wickets, and then cashing in later on.

"In the first half of the day, when Stokes and Anderson were all over India, he settled in and let England have the majority of control, but he realised that if he was still there later in the day and those two seamers got tired for the second new ball that would be the time to pounce.

"His match-management was spot on. I think we have always known he is a talent but he showed he is a real smart cricketer as well."

It took him 82 balls to reach his half-century, 33 balls later he was celebrating a third Test hundred. The numbers are impressive enough but the manner in which he accelerated was a sight to behold, even if he did have to ride his luck on occasions.

For a tiring England attack, the second new ball was the trump card. India had a small lead when it was taken but 10 good overs with a shiny, hard new ball could go a long way to ensuring that lead stayed manageable.

Instead, Pant charged Anderson's first ball and thumped it over mid-off for four. You just don't do that. But here he was, doing it and making it look easy as the runs flowed.

It was audacious but that was nothing on what was to follow. If England were not already deflated, the sight of Pant reverse paddle-sweeping Anderson over the slip cordon for four will have done the trick. Even in an age where T20 shots have long since infiltrated Test cricket, it was gloriously obscene.

Anderson got him the over after he had clubbed Root for six to bring up his ton but, frustrated as he was to depart, Pant's work was done - England's hope turned to something in between despair and resignation.

The efforts of Stokes and Anderson were gargantuan but, in little more than an hour after tea, the brilliance of Pant had all but undone their good work.

Arguably, the match situation is not far off how many would have predicted after England's below-par effort with the bat on day one, it is the manner of it that will hurt them most.

Their stars did all that could have been asked of them and yet, thanks to India's latest superstar, they end the day just where they started.

Follow text commentary from day three of the fourth Test between India and England in Ahmedabad on skysports.com and the Sky Sports app from 3.50am on Saturday.