"Joe Root's side need to work out a way of progressing"; former England captain Nasser Hussain says the current side can learn from mentality and approach of a 'tough' New Zealand side following their Test series defeat to the Black Caps

After New Zealand claimed an historic Test series win over England, Nasser Hussain says the Black Caps are a good example for Joe Root's side to follow...

New Zealand have been excellent in both Test matches really. The rain at Lord's probably saved England a little bit, they've been brilliant here; their batsmen played very, very sound cricket, their bowlers and the catching was superb behind the stumps. It was also an important win for New Zealand.

For all their success, away from home against teams like India, Australia and England, their record is actually poor. So this was a very important win, not only historically but also with what lies ahead with the World Test Championship final, they'll go into that with a lot of confidence.

Michael Atherton and Simon Doull were talking about how this is probably a golden era of New Zealand cricket because this is a complete side, they don't rely on one or two cricketers and if you look after those then you can get through the others. This side, as they've shown in making six changes here, still look a fantastic outfit. 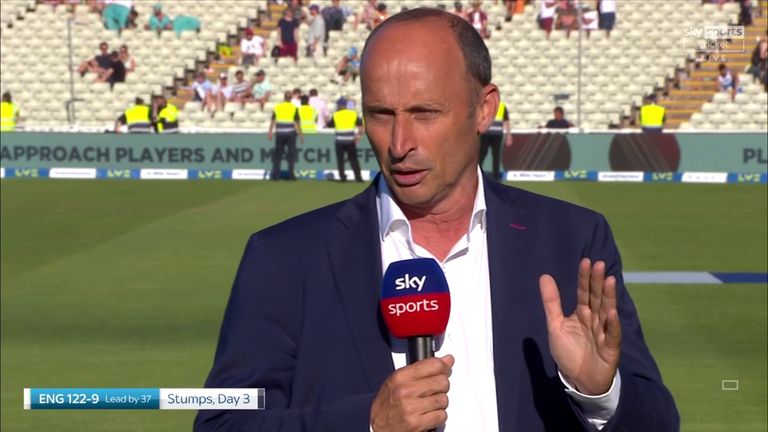 You want depth and with the amount of cricket that is being played nowadays, you want to be able to rotate and rest, you virtually want an option for every position in that side. And you'd say, looking at New Zealand's squad, they've got every base covered.

They play cricket the right way. Even when they lost that World Cup final at Lord's against England, Kane Williamson spoke with a lot of dignity and humility in the presentation, they took it pretty well and they play the game the right way. They're tough as well. Athers was talking about what makes a good cricketer and it is not just technique, it's mentality as well. They have a very, very strong mentality.

For a nation like New Zealand to be above India, England and Australia in the Test rankings, is a massive achievement for them. That's nice but for them now, the first ever final of the World Test Championship, if they could go that one stage further and beat the mighty India, that will be a phenomenal achievement.

As for England, their batting line-up has failed for a little while, their bowlers have been absolutely magnificent. Even in that little session with New Zealand chasing 38, Stuart Broad, Jimmy Anderson, Olly Stone, Mark Wood all came in. They are a side trying to rebuild, they are a side trying to introduce new players so it's going to be difficult for them.

But I do think we need to see some changes in the batting line-up. Not necessarily changes in personnel but changes in approach. Have a look at New Zealand. When I was captain, everyone use to say 'have a look at Australia' and would always think 'why are we looking at Australia? They have Warne, McGrath, Waugh, Gilchrist - we don't have those cricketers!'

I think Zak Crawley will be worried about his place because there isn't that much cricket to get into form and get a big score. There are others out there like Hameed, Malan, Abell, there are a few out there but I don't like rotation. That's another thing we've got to learn from New Zealand, they stick with their players and they give them a long run. I hope England learn that as well.

They are the fourth best side in the world, in 1999 we were ranked the worst side in the world but we had to learn and work out a way of progressing. Joe Root's side need to work out a way of progressing. They have Broad, they have Anderson, they have Stone, Wood, Ollie Robinson, Saqib Mahmood; they've got a lot of seamers and, in Jack Leach, a decent spinner.

But there needs to be a real progression in English batting, not just here in this Test side but throughout English cricket. This is a real opportunity for that.