India's Mithali Raj scored 75 not out to seal her side's four-wicket win in the third ODI against England at Worcester; watch the women's T20I series between England and India live on Sky Sports Cricket, from 6pm on Friday July 9 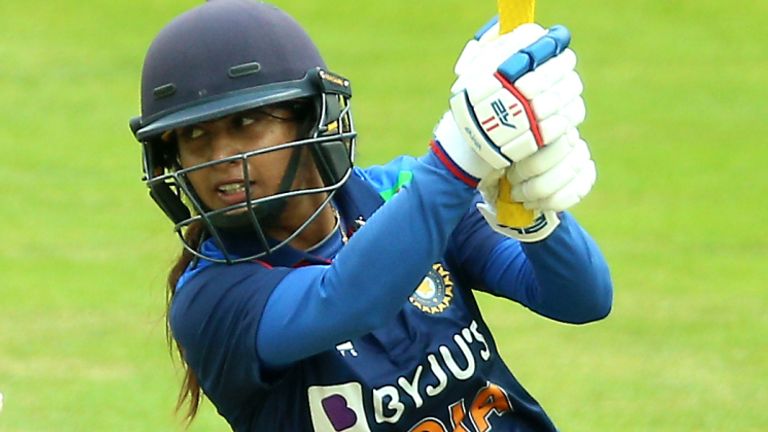 India captain Mithali Raj became the highest run-scorer in women's international cricket as she guided her side to a tense four-wicket victory in the third ODI against England.

The 38-year-old, who finished undefeated on 75 from 86 balls, overtook former England captain Charlotte Edwards' total of 10,273 runs across all formats as the tourists triumphed at Worcester with just three deliveries to spare.

Raj drove Katherine Brunt through the covers for the decisive boundary that earned India two points and maintained their hopes of winning the multi-format series ahead of the three T20I games which begin on Friday, live on Sky Sports Cricket.

England, who had won the first two ODIs, posted 219, with Nat Sciver top-scoring on 49, but it was not quite enough as India's skipper held her nerve to clinch a narrow win.

Although partly influenced by overnight rain that reduced the match to 47 overs a side, Raj's decision to bowl after winning the toss was quickly vindicated when Tammy Beaumont fell for a duck, lbw playing across the line to Shikha Pandey.

Apart from one Pandey over that yielded three fours for Lauren Winfield-Hill, it took time for her and Heather Knight (46) to find any rhythm as they gradually built a partnership of 67 from 90 deliveries.

Sneh Rana separated the pair with her fourth ball, tempting Winfield-Hill (36) to sweep and pick out Pandey on the boundary before the arrival of Sciver injected the innings with some impetus.

She struck a lively 49 from 59 balls but, like the skipper, Sciver perished narrowly short of her half-century while giving India's spinners the charge - Smriti Mandhana leaping to her left to complete a stunning catch at long on. 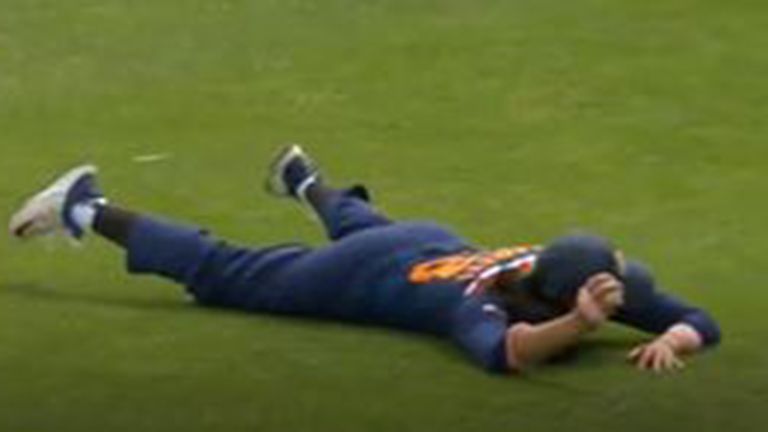 With the boundaries drying up and wickets falling at regular intervals, it was left to Sophia Dunkley to shepherd England towards the 200 mark.

Dunkley compiled 28 from 35 balls but, once she was bowled around her legs by Deepti Sharma (3-47), it was only thanks to some late hitting by Kate Cross, with 15 not out from eight balls, that the home side clambered to 219 all out.

India started solidly in the powerplay, with Mandhana unveiling some silky strokeplay as she dispatched Brunt for successive fours in her opening partnership of 46 with Shafali Verma (19).

But Cross - England's five-wicket hero in the second match of the series, achieved a much-needed breakthrough, persuading Shafali Verma to miscue to cover and Sophie Ecclestone struck soon afterwards as Jemimah Rodrigues chopped on.

Mandhana looked well set, hitting eight boundaries in her 49 from 57 balls, only for Sarah Glenn to prise the left-hander out with a delivery that skidded on and pinned her leg before to leave India in an uncertain position at 81-3.

The leading run-scorer across formats in women's cricket 🙌

Vice-captain Harmanpreet Kaur (16) helped Raj to repair the damage with a watchful stand of exactly 50 before she became Knight's 50th ODI victim, lbw attempting an untidy reverse sweep that the replay suggested would have missed her stumps.

However, Raj clipped Cross to the boundary to bring up her half-century and began to press the accelerator, with Rana contributing a vital 24 from 22 balls before she fell to Ecclestone (2-36) in the penultimate over and the captain saw her side home.

Watch the women's T20I series between England and India live on Sky Sports Cricket, from 6pm on Friday.