Chris Greaves goes from Amazon driver to driving force for Scotland in win over Bangladesh; 31-year-old fired with bat and ball against The Tigers, helping the team to a victory captain Kyle Coetzer says came after ample planning

It used to be Amazon parcels - but on Sunday, it was with bat and ball as Kyle Coetzer's side defeated Bangladesh by six runs in Oman to kick off their T20 World Cup campaign with victory.

South-Africa born Greaves scored 45 from 28 balls as Scotland recovered from 53-6 in the 12th over in Muscat to post 140-9 after 20 against a side ranked eight places above them.

The 31-year-old then claimed two key wickets - Shakib Al Hasan caught in the deep and Mushfiqur Rahim bowled - in just his second T20 international as The Tigers could only reply with 134-7.

Scotland captain Coetzer said: "I am really proud of Greaves. He was delivering parcels for Amazon not too long ago, and now is getting Player of the Match against Bangladesh.

"He isn't a contracted player in Scotland. He was on the fringes. He put his hand up, worked extremely hard and put himself in the picture.

"Going back a month, he wouldn't even start in one of these games. Look at what he has done. 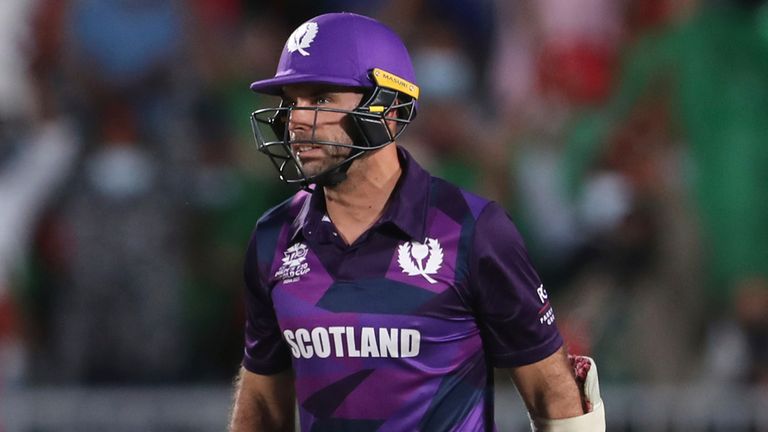 It’s a special feeling to beat Bangladesh. It’s not the first time we’ve beaten them but we know the strength in depth in their squad. It took a real fighting effort. I was saying to our guys that we’re never out of the game and to always believe. We’ll be looking for a more wholesome performance next time.”

"It is just proof in the pudding that there are some quality players around Associate cricket. They just need the platform to show it."

Scotland's win puts them in a great position to advance into the Super 12 stage at the T20 World Cup for the first time, with further round-one games against Papua New Guinea and Oman to come, on Tuesday and Thursday respectively.

Coetzer added: "[Beating Bangladesh] is a huge win for us, it's something we've been planning for a long time.

"Until a month ago, we had played two games of cricket as a group so there was a lot of planning behind the scenes,

"It sometimes seemed you were working for nothing because our tours kept getting cancelled - that what was really hard for us to manage.

"But now we're reaping the rewards of keeping the faith that this tournament would come around and we would be a better team for it when we arrived.

"There have been a lot of sacrifices for many players. Associate cricket is very hard and to get the opportunity we do when we get out here, it's important to take it.

"If you get brushed aside, people don't appreciate how hard Associate cricket is. We've made some good strides and I'm really proud."

Watch Scotland take on Papua New Guinea live on Sky Sports Cricket from 10.30am on Tuesday. That game is followed by Bangladesh vs Oman from 2.30pm on the same channel.