Ishan Kishan and KL Rahul shared an opening partnership of 82 from 50 balls as India defeated England by six wickets in their T20 World Cup warm-up in Dubai; watch the tournament live on Sky Sports between now and November 14

Ishan Kishan smashed an undefeated 70 as India set down a marker for the T20 World Cup, overcoming England by six wickets in their warm-up clash in Dubai.

The big-hitting opener struck three sixes and seven fours in his 45-ball knock before retiring, while KL Rahul also hit a half-century before Rishabh Pant (29no from 14) guided India home with six deliveries unused.

Jonny Bairstow top-scored with 49 from 36 balls, while Moeen Ali hit 43 not out from 20 as an England side led by Jos Buttler - with Eoin Morgan rested - posted 188-5 after being put in to bat. 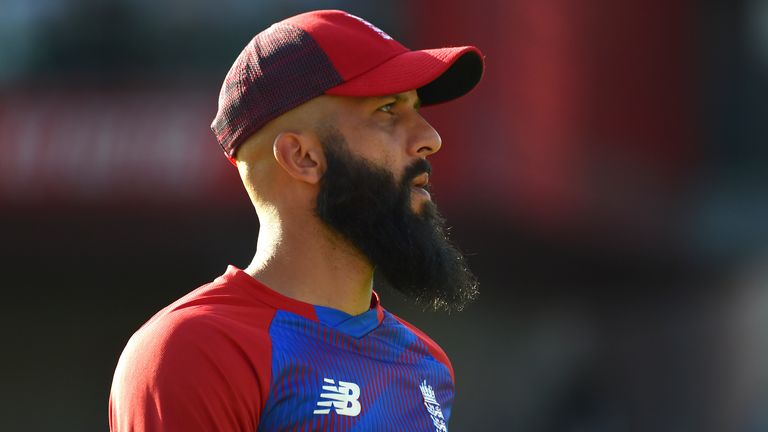 I feel pretty good. Playing on these wickets over the last month or so [in the IPL] has been pretty helpful for me and I feel in good rhythm with the bat, so I’m looking forward to the World Cup and hopefully getting some games.

But they were unable to defend that total and also suffered an injury scare in the build-up to the tournament when Liam Livingstone fumbled a catch in the deep off Kishan and left the field wincing in pain.

Having lost the toss, stand-in captain Jos Buttler went out to open with Jason Roy and the pair made a brisk start, putting on 36 before Mohammed Shami nipped one through to bowl the stand-in captain for 18.

Shami (3-40) also accounted for Roy (17), who flicked him into the hands of short fine leg, while Dawid Malan (18) was bamboozled by a wrong 'un from leg-spinner Rahul Chahar.

However, Chahar took some punishment from the pugnacious Livingstone (30 from 20) as he and Bairstow steered England into a commanding position with a stand of 52 from 33 deliveries.

Shami returned to bowl Livingstone with a yorker off his pads and Jasprit Bumrah (1-26) produced an equally unplayable delivery to deny Bairstow a half-century, but clinical hitting by Moeen - culminating in two sixes off Bhuvneshwar Kumar to complete the innings - lifted England to 188-5.

That target held no fears for India's openers, though, with Kishan and Rahul (51 from 24) in imperious mood as they shared an opening partnership of 82 from 50. 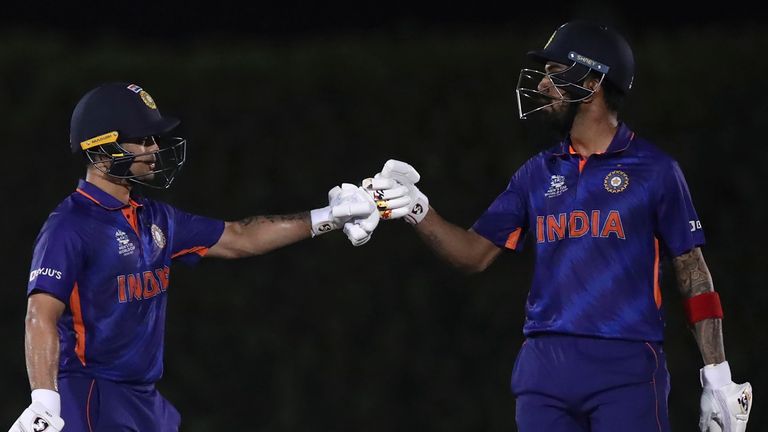 I think India will be up there at the T20 World Cup but there are other good teams. West Indies might be another favourite, being the defending champions.

Rahul savaged Chris Woakes, taking 18 off a single over, as well as pummelling Moeen for four, then six and drilled Mark Wood to the cover boundary to reach his half-century - only to go after the next ball as well and holed out to backward point.

Livingstone picked up the prize scalp of Virat Kohli for 11, but the all-rounder then injured his hand attempting to remove Kishan, who had just been dropped by Buttler down the leg side.

But Pant took up the baton, cashing in on an untidy penultimate over from Chris Jordan and sealing India's victory with an enormous six over midwicket.

Jonny Bairstow looked in good nick and would surely have registered a half-century had he not been on the receiving end of a stunning Jasprit Bumrah yorker, while Moeen Ali also displayed some clean hitting towards the end of England's innings.

David Willey was the pick of the England bowlers, taking 1-16 and underlining his worth both at the start of the innings and in the death overs - not that he got the opportunity to bowl the final one, unfortunately.

For India, KL Rahul maintained his magnificent form coming off the back of a prolific IPL, while Ishan Kishan's strokeplay and power gives them an interesting dilemma at the top of the order when the tournament gets under way.

Despite not taking a wicket, Ravichandran Ashwin gave India some control in the middle overs, while paceman Mohammed Shami again proved his knack of taking wickets at crucial moments.

Both teams have one more warm-up fixture on Wednesday before they dip their toes into the tournament proper - India take on Australia in Dubai, while England face New Zealand in Abu Dhabi from 11am.

Meanwhile, the first round of the T20 World Cup continues on Tuesday, with Scotland aiming to build on their six-run success against Bangladesh when they meet Papua New Guinea in Muscat.

Coverage is live on Sky Sports Cricket from 10.30am, followed on the same channel by the day's second Group B clash between Oman and Bangladesh.

Watch England take on New Zealand in a T20 World Cup warm-up match live on Sky Sports Cricket from 10.50am on Wednesday.