Australia began their bid for a maiden ICC Men's T20 World Cup title with an edgy five-wicket victory over South Africa in Abu Dhabi with two balls to spare.

Australia, beaten by England in the 2010 final, have been dumped out in round two in the last two editions of the T20 World Cup and came into this tournament having lost their last five bilateral T20 international series.

They made a winning start at Sheikh Zayed Stadium on Saturday, albeit in scrappier fashion than they would have liked after limiting the Proteas - who are also yet to lift the T20 World Cup - to 118-9.

Australia were reduced to 81-5 in the 16th over of the chase but Marcus Stoinis (24no off 16) and Matthew Wade (15no off 10) shared an unbroken partnership of 40 from 26 deliveries to steer their side home.

That meant the efforts of South Africa's Aiden Markram came in vain - the 27-year-old was the only one of the Proteas batters to pass 19 as he made 40 from 36 balls, while he also took an outstanding catch at long-on to dismiss Steve Smith (35).

The diving Markram takes a blinder to remove Smith for 35 - brilliant from the #SouthAfrica fielder! 🦸#Australia need 38 from 30 balls...#T20WorldCup | #AUSvSA

Ultimately a lack of runs cost South Africa, who slipped to 23-3 inside five overs after captain Temba Bavuma (12 off 7) had struck back-to-back boundaries in Mitchell Starc's 11-run first over.

Bavuma was bowled by Glenn Maxwell, while Quinton de Kock (7 off 12) suffered an extremely bizarre dismissal, flicking a delivery from Josh Hazlewood (2-19) onto his thigh pad and then watching on in anguish as the ball ballooned into the air and back onto his stumps.

That was a moment of despair for De Kock but delight for Hazlewood as he added to his earlier dismissal of Rassie van der Dussen (2). 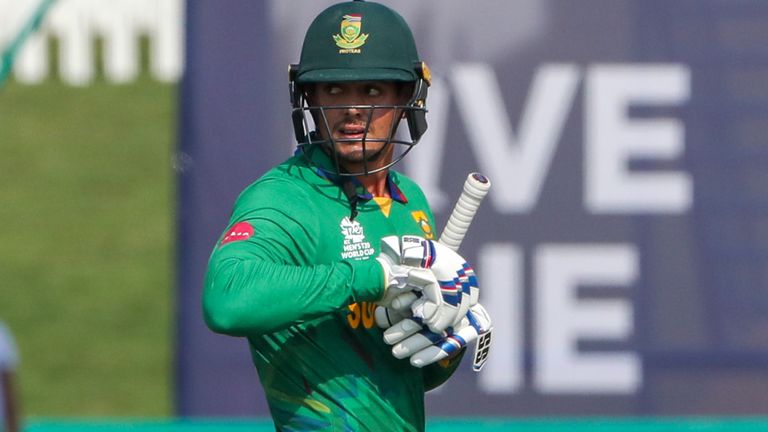 Markram did his best to rally South Africa but wickets continued to fall at the other end, with Australia leg-spinner Adam Zampa (2-21) picking up two in an over - his lbw dismissal of David Miller (16) ending a 34-run stand with Markram for the fifth wicket.

The comical run out of Keshav Maharaj, who slipped over after aborting his attempt to run on an overthrow, summed up South Africa's haphazard innings, although a late cameo from Kagiso Rabada (19no) gave the Proteas something to defend.

💬 When things go bad, they can get really bad! 💬

Rabada boosted his side further when he collected the catch at third man, off the bowling off Anrich Nortje, that dismissed Australia captain Aaron Finch for a five-ball duck and then had David Warner caught at backward point for 14.

The exit of Mitchell Marsh (11) gave South Africa another lift but then Smith and Maxwell teamed up to add a run-a-ball 42 to take Australia 39 runs shy of victory with more than five overs to go.

There was then a twist as Markram's outstanding diving catch at long-on dismissed Smith before Maxwell (18) was bowled three balls later as he became Tabraiz Shami's 50th T20 international wicket.

But up stepped Stoinis and Wade to steady matters, with the former striking the winning boundary off Dwaine Pretorius in the final over.

Josh Hazlewood - yes, the dismissal of De Kock was rather fortunate but the Australia seamer removed Van der Dussen with an excellent probing delivery in the channel as he carried on the fine form he had shown for IPL champions Chennai Super Kings.

Adam Zampa - the leg-spinner is now Australia's most prolific bowler in T20 international cricket with 54 scalps in 51 matches after his brace against South Africa. Zampa had Miller pinned lbw and then Pretorius caught on the cut three balls later as the Proteas tumbled from 80-4 to 82-6.

Aiden Markram - on a day of disappointment for South Africa, Markram was a shining light. His innings included three fours and a six and helped his side to a total that proved taxing for Australia, while his catch at long-on was Superman stuff!

Group 2 gets going on Sunday with the heavyweight meeting between 2007 winners India and 2009 champions Pakistan in Dubai, a match you can watch live on Sky Sports Cricket from 2.30pm.

The earlier game is the Group 1 encounter between Sri Lanka and Bangladesh (10.30am, Sky Sports Cricket), with both sides having come through last week's first round.