Ollie Robinson dismissed David Warner and Steve Smith for ducks on day one in Hobart before suffering a back spasm; bowling coach Jon Lewis says England have had conversations with Robinson about improving his fitness; Nasser Hussain believes the Sussex seamer should be cut some slack

England seamer Ollie Robinson must become fitter if he is to enjoy a long and successful Test career, says the side's pace bowling coach Jon Lewis.

Robinson dismissed David Warner and Steve Smith for ducks early on day one of the fifth Ashes Test in Hobart but then suffered a back spasm which has seemingly left his ability to bowl in the rest of the innings, if not the game, in doubt.

The Sussex seamer missed the fourth Test in Sydney with a slight shoulder niggle and had tended to tire towards the backend of his bowling spells.

Robinson is England's highest wicket-taker in this Ashes series, with 11 strikes so far, while overall in Test cricket he has bagged 39 scalps in nine games at an average of 20.69 since debuting against New Zealand last summer.

Speaking to BT Sport, Lewis said of Robinson: "If he's going to perform consistently over a long period of time at this level, he'll need to be a fitter bowler.

'Robinson must go and do the work'

"That's something he's definitely looking at and we're working on it with him. We've had those conversations with him, been pretty frank with him, and now it's up to him to go and do the work.

"He's got to get used to understanding what it takes to be a full-time year-round international cricketer. So far he's been okay but we play a lot of cricket, and training and playing at the same time isn't always straightforward.

An unwanted first for Australia

David Warner and Steve Smith have played 72 Tests together and this was the first occasion that both have been dismissed for ducks in the same innings.

"That's something he's learning. In county cricket it doesn't often happen - the guys don't train and play together at the same time because they play game after game after game.

"But in international cricket he's on the road a lot, he's going to have to learn to look after himself probably better than he does at the moment."

Nasser Hussain, speaking to Sky Sports News after the first day's play in Hobart, was more sympathetic to Robinson due to the Sussex seamer still being new to the rigours of international cricket. 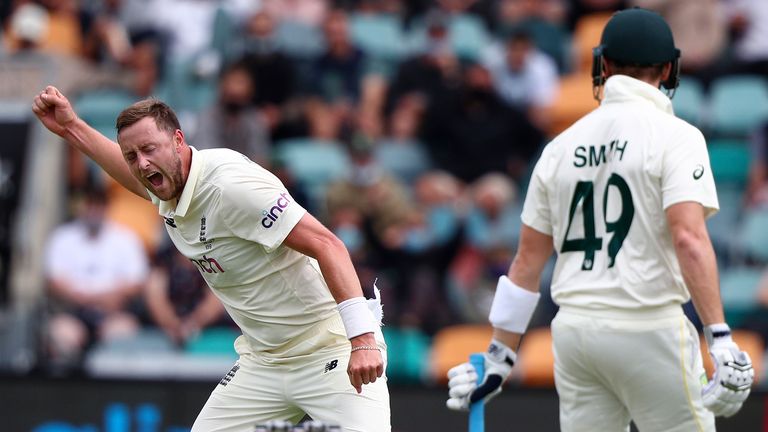 "I think we need to cut Robinson a little bit of slack," Hussain said. "He is in his first year of international cricket and it is so different to being a domestic bowler, where you just play, play, play.

"It was noticeable last year that his pace and his speeds were dropping off as he got towards the end of the day or end of a series. It's something that he needs to work on, but he doesn't have to look too far.

"I know Jimmy [Anderson] is resting for this game because of sore hamstrings, but he only has to look at him and [Stuart] Broad - everyone talks about their skills and their wickets, rightly so, but they've played over 300 Test matches between them as fast bowlers. They know how to get physically fit for bowling.

"He should go and sit with Broad and Anderson and pick their brains while they are still around, about the demands of being a fast bowler internationally."

Butcher: England may be running out of patience

Former England and Surrey batter Mark Butcher struck a different tone on BT Sport, saying: "I was on the tour of Sri Lanka last year working for another broadcaster and I was watching Robinson move around the outfield.

"I thought, 'wow, this guy really stands out as not looking anywhere near as athletic as the rest of the team'.

"It was nothing personal, just an observation that here was someone who moved more like some of the players I played with than the way guys move now.

"There appeared to be some conditioning issues back then and one of the issues for everyone's fitness now has been the way people have been forced to live in bubbles.

"It certainly is an issue for him and a conversation that, from listening to Lewis, you know England have had many times. They may be running out of a little bit of patience."

McGrath: Bowlers must work hard off the field

Robinson, 28, has been compared to great Australia seamer Glenn McGrath due to his height and ability to move the ball both ways off a length.

Offering words of advice to Robinson, McGrath told BT Sport: "I found a trainer that I worked with who made me a lot stronger.

"His goal was to make me unbreakable and he achieved it mentally and physically. He really toughened me up.

Outstanding start from Ollie Robinson. England have bowled fuller in the opening 10 overs than in any innings this series - and they've been rewarded. #Ashes @IGCom pic.twitter.com/CtINH8Idlu

"You have to train twice as hard off the field as you do on it. I used to look forward to playing to have a rest. That's the sort of attitude you need.

"Robinson really has to put the yards in off the field and get as strong and as fit as possible. He is the sort of bowler who should be bowling long spells at the top of his pace all day."

"It's almost a realisation. Tim Bresnan is big example - he was used to bowling in county cricket and bowling within himself.

"When you can't bowl within yourself, you find out your real fitness. It's an easy fix, just a bit of hard work.