James Anderson takes his 1,000th first-class wicket during Lancashire's County Championship clash with Kent at Emirates Old Trafford; wicket of Heino Kuhn - taken from the James Anderson End - was his fifth in an incredible spell with the new ball to end with career-best figures of 7-19 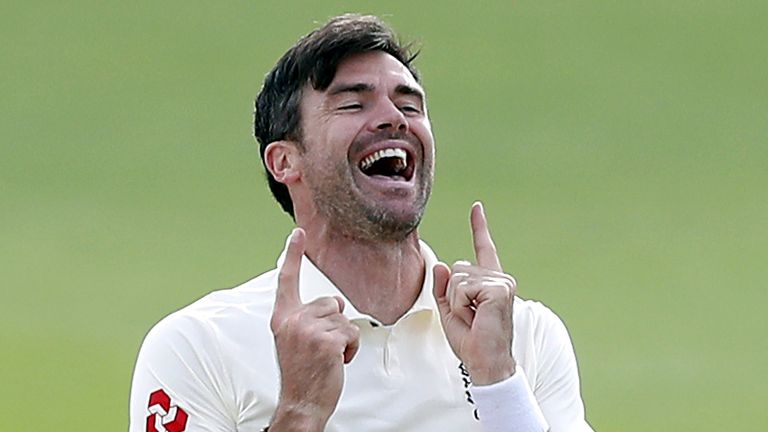 James Anderson has reached another milestone in his remarkable career as he took his 1,000th first-class wicket during Lancashire's LV= County Championship match against Kent at Emirates Old Trafford.

The England star, who turns 39 at the end of the month, is already the most prolific fast bowler in the history of Test cricket, with 617 wickets to his name, and reached his latest landmark during an incredible new-ball spell for his home county when he had Heino Kuhn caught behind by Dane Vilas with one of his classic outswingers.

The wicket was taken from the end bearing his name and completed his 51st first-class five-wicket haul - wickets 1,001 and 1,002 followed soon after as Anderson claimed career-best figures of 7-19 after 10 overs of magnificent swing bowling as Kent were bowled out for 74.

"It feels great - I have been getting ribbed from the lads upstairs because I genuinely didn't know how many wickets I'd taken," Anderson said.

"At first I thought they were going a bit over the top for a five for, but to see the reaction from the lads was really special and then to get to chew the fat with them after the day was really nice.

"It feels special to get the milestone here where I took my first wicket - it still sounds ridiculous to think I've taken 1,000 wickets.

"I'll look back on this in years to come and think more about it, but right now spending time with the lads and the reaction from the crowd is special. It was a lifelong dream to play for Lancashire.

"I'm away a lot with England and don't get to play much for Lancashire, so it makes that much more special to do it here and with a performance that helps the team. It's a day I'll never forget."

Having made his first-class debut for Lancashire in 2002, Anderson becomes the first man to achieve the feat having begun his career since the turn of the century and the 216th overall.

"To get 1,000 wickets is becoming harder with the amount of cricket that is played across the world and it is getting less and less likely that it will happen again," the Burnley-born bowler added.

"I could potentially be the last person to do it which just adds to the feeling of it being very, very special."

Although he now has 385 first-class wickets for the Red Rose, the majority of Anderson's scalps have come in international cricket and another three Test wickets will take him past Anil Kumble and into third of the all-time list, with only Muttiah Muralitharan (800) and Shane Warne (708) above him.