Ben Stokes says he is trying to see the "bigger picture" after being hit for four sixes in the last over of the World Twenty20 final.

England appeared to be favourites to claim the title when the over began with the West Indies 19 runs short of their victory target.

Carlos Brathwaite proceeded to smash four straight Stokes deliveries into the stands at Eden Gardens to secure an astonishing triumph.

While the West Indies players celebrated exuberantly, Stokes crouched down, struggling to come to terms with the turnaround.

But in the days since, Stokes has put the focus on the key positive element of England's World Twenty20 campaign - namely that they exceeded all expectations by reaching the final. 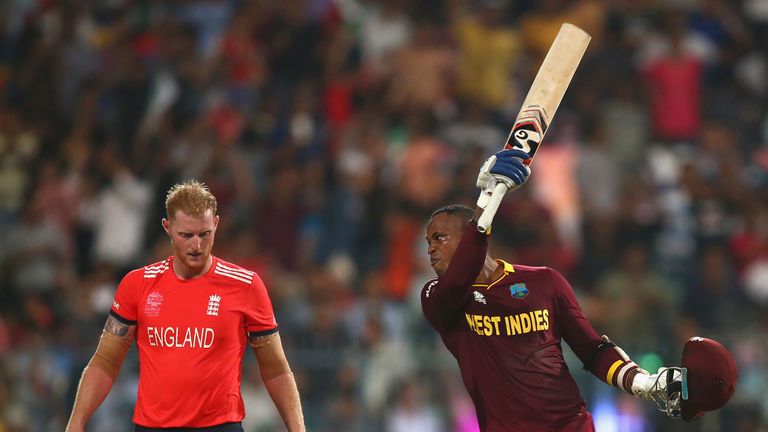 No matter what anyone said it wasn't going to change how I felt for the hour after that. Once it settled down we realised what we managed to do it was more uplifting.

"Emotion-wise it was quite hard to think of anything else except devastation and everything that goes along with that," he told Sky Sports News HQ.

"It's been a few days since and that's all sort of settled I look at the bigger picture that I've played in a World Cup final and nobody was really expecting us to go that far. There are a lot of positives to come out of the tournament.

"No matter what anyone said to me it wasn't going to change how I felt for the hour after that. Once it settled down and we realised what we managed to do it was a bit more uplifting."

And he added: "The realisation came when they needed one run to win," he said. "After the first two they still needed another seven runs and I still backed myself to do that.

"I just didn't execute what I wanted to do at that time. When they needed one off three it really hit home and I wondered what I'd done."

Paul Collingwood, part of Trevor Bayliss' England coaching staff, believes Stokes will "bounce back" from the events of Sunday afternoon and is confident he will emerge an even better player.

"Trevor said it straight after the match - Ben Stokes would go out and bowl that last over in that match again," he told Sky Sports News HQ.

"He's never going to shy away from that and he's one of those cricketers that needs to be in there and in the thick of things.

"It wasn't meant to be on this occasion but he will bounce back from that. We all know what a talented cricketer he is and thankfully he is a very strong character.

"There were a few tears afterwards but he'll soon be enjoying himself and it's important that he puts that to bed and keeps improving."