Stuart Broad: How I got edge over David Warner in 2019 Ashes series

England paceman also talks working with James Anderson - and some of his new-ball partner's grumpier moments!

The England seamer removed the Australia opener seven times, including for three straight ducks, as Warner ended the five-match series with just 95 runs and only two double-figure scores.

On the latest Sky Cricket Podcast - a fast-bowling special also featuring West Indies legend Michael Holding and ex-South Africa star Shaun Pollock - Broad explained how he was able to enjoy so much success against a player who had previously had the better of him.

"I did a lot of research going in as my record against him was really average," said Broad, on a show you can listen to in the player above or by downloading: Apple Podcasts | Spotify

"He is such a dangerous player and one of the best third-innings opening batsmen in the world. You know he can come in and take the game away from you if Australia have got a lead.

"Having played against him a lot over the last eight or nine years, I found that, as I am a taller bowler, when he sat back in the crease he was cutting and square driving me a lot to the boundary

"If he hit it straight back past me for four, I'd be happy. I didn't mind a few early boundaries if I could bring those stumps into play. I probably ended up bowling a bit fuller than I planned but it worked.

"Once I got him at Lord's, the third time in a row, I just got that feeling like I was getting a bit of a competitive edge over him.

"Little things, like he'd come and talk to me in the morning. That's something he's never done as he is such a strong competitive character. He was just trying to find out what was going on.

"He asked me in the warm-up at Lord's whether I had meant to nip it up the slope and I was like 'yeah, yeah, yeah' but of course I hadn't!" 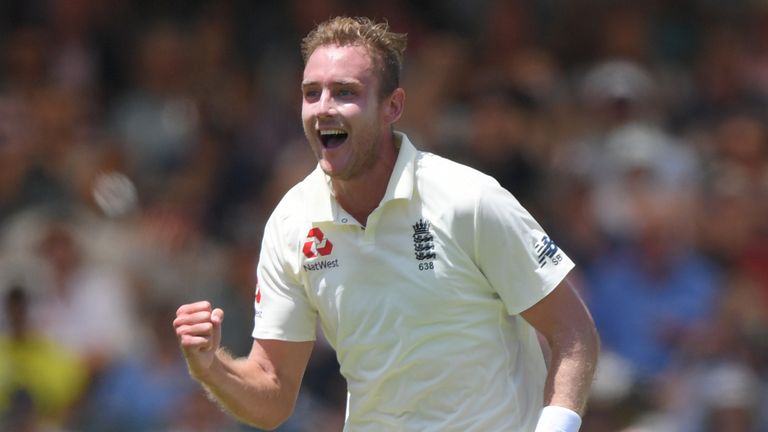 I hate it when a captain gets a bowler on, asks what field he wants and the bowler says ‘I don’t mind’. What do you mean you don’t mind?! You have to bowl the ball! If I feel in a bad spell, I want another slip or short leg in as it ups my intensity to have to bowl better balls. Without a deep square, I cannot bowl a drag down. If you take my cover out and put him at slip, I can’t bowl a floaty half volley.

Stuart Broad on wanting to decide his own fielding settings

Broad and new-ball partner James Anderson have formed one of the finest bowling tandems in Test cricket taking over 1,000 wickets combined as England spearheads, something they continue to be for Joe Root's side.

Broad explained why the duo work so well together and how having the other in close proximity when they are bowling has been vital.

"He loves bowling. I love the competitive side of cricket, the moment of winning, working a batsman out, getting a wicket, but he just loves any sort of bowling and is at is happiest just trucking in," Broad said of Anderson, the most prolific seamer in Test history.

"He always wants one more over whereas I'm very different. I'm like, 'Rooty, that's five now, let me have a rest!' We are very competitive but our different strengths bring us together.

"You are constantly working together, you share everything. Jimmy and I talk about everything on that first morning - what lengths suit this pitch, how we are going to work out a certain batsman.

"Sometimes we will say 'let's make a batsman leave 12 balls each and then one of us will try a nip-backer'.

"We don't look at it as 20 wickets to win a Test match, we see it as 'how can we set this first hour of the game up on our side rather than the opposition's'. That might be 1-20 or if it's doing a bit, it might be 'try and get three wickets and put them under pressure'.

"Communication is everything and I feel we have done that more since we have moved to mid-on or mid-off when each other is bowling.

"We always want someone who is bowling at the other end at mid-on or mid-off. If you are grazing at fine leg you are not learning anything from each other, not really supporting each other in that 10-over period.

"We also talk a lot about passing spells onto the next guy. It's no good me bowling six overs and then in my final one thinking, 'I'm going to go for an easy wicket here' and then get taken for 12. If the pressure stays, it's likely the next guy will get a wicket."

So, Broady, is Jimmy as grumpy as he can sometimes appear on game days?

"There is no point speaking to him before 9am, before 11 really! He'll be like 'why are you speaking to me?' Let him run, let him find his own mood and then pick the right time to have a chat.

"I remember last year in a Test against West Indies in St Lucia that before the first ball of the innings was bowled, Jimmy wanted his fine leg squarer and Rooty wanted him finer.

"Jimmy was like 'I'm not bowling unless he goes squarer'. I was at mid-off like 'the game's not going to start here!'"