"When you're beaten by a better side you need to put your hands up sometimes and say well played. Today that is the case"

England captain Eoin Morgan admitted Australia were "too good" for his side as the tourists clinched the ODI series with a thrilling three-wicket win at Emirates Old Trafford.

Centuries from Alex Carey and Glenn Maxwell took Australia to the brink of victory in the deciding third ODI but England kept themselves in contention as they dismissed the pair in quick succession to leave the visitors needing 10 from the final over.

Mitchell Starc, who had taken two wickets in two balls to start the match, got them with a six and a four off Adil Rashid to inflict England's first defeat in a bilateral ODI series since January 2017 and their first at home since 2015, again to Australia.

"We were still in the game (going into the last over)," Morgan said. "When you can break big partnerships and the ball is offering a little bit and it is probably getting more difficult to bat as the innings goes on, you're never out of the game.

"Having someone like Adil Rashid gives us that option as well, even when the game is getting away from us. But Australia, given their performance today, were too good for us. 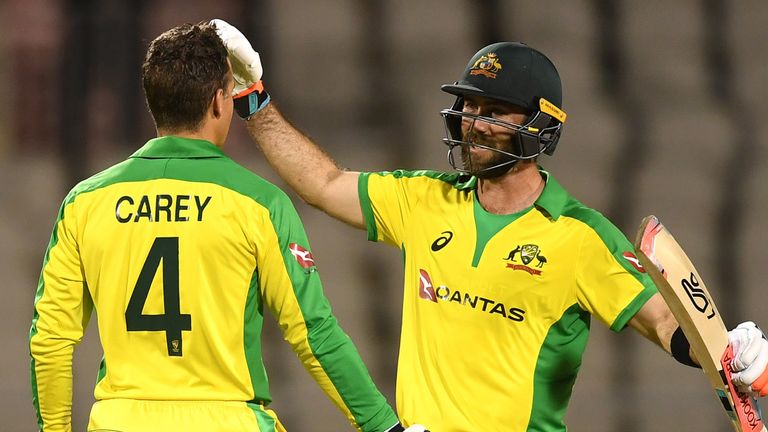 "I think it started in the first over, losing two wickets for no runs and then post over 300 is a huge positive for us. I think Jonny Bairstow was outstanding today, well supported by Sam Billings and Chris Woakes again with the bat.

England were left to rue missed opportunities with Carey dismissed off a no-ball by Jofra Archer on nine and Maxwell dropped by Jos Buttler off Rashid on 44 but Morgan refused to dwell on them and says that the summer has been a positive one for the white-ball side.

"Small opportunities that we might have taken advantage of if we'd been on top of our game went begging," he added. "But still, when you're beaten by a better side you need to put your hands up sometimes and say well played. Today that is the case.

"I think we've done outstandingly well, I think the experiment of growing and learning about our larger squad while the priority has been Test cricket has been a good and valuable exercise.

"Some guys have come in and taken opportunities with both hands, guys like Sam Billings and Dawid Malan have been brilliant. And probably more recently when we've been closer to our strongest squad available to us, guys have stood up which has been brilliant."

While Morgan prepares to head off to the IPL, along with a number of his England team, the coronavirus pandemic means it is unclear when the side will next be playing together.

A white-ball tour of South Africa is tentatively scheduled for November but wherever England's next engagement is, Morgan believes the bio-secure bubbles the ECB have created have provided a blueprint for other nations to learn from.

"From where we were five months ago to have had a full set of international fixtures and to have cricket back on the TV is huge for the game," he said.

"I think we've pioneered and mapped out exactly how to get cricket back on. Given we've had no positive cases within the bubble I think it is a very good example and one every team around the world will look at.

"Whether they can model it exactly like that might be a bit more challenging but I think the ECB has done an outstanding job."