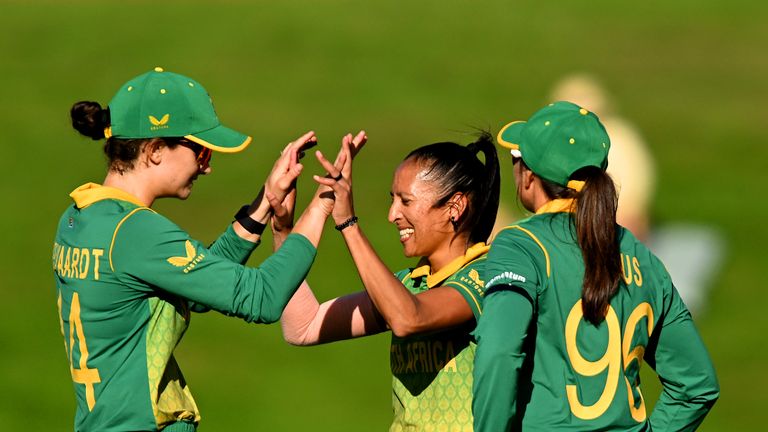 South Africa got off to a winning start in the Women's World Cup, albeit with a somewhat unconvincing 32-run win over tournament debutants Bangladesh in Dunedin on Saturday.

With South Africa bowled out for a disappointing 207 when batting first, it was left to Ayabonga Khaka to fire them to victory with the ball, as her 4-32 saw her become just the fifth South African to take 100 ODI wickets.

Khaka's haul included three wickets for three runs in the space of nine deliveries to derail the Bangladesh chase after their opening pair had put on 69 for the first wicket.

Bangladesh then stumbled to 113-6 following Khaka's burst, but a 53-run partnership between captain Nigar Sultana (29) and Ritu Moni (27) briefly reignited hopes of a shock victory before their final four wickets ultimately fell for nine runs.

Laura Wolvaardt struck 41 at the top of the order for South Africa, but meaningful contributions with the bat were generally few and far between. Struggling at 119-5 in the 34th over, it was left to a 71-run sixth-wicket stand between Marizanne Kapp (42) and Chloe Tryon (39) to catapult the team up towards their 200+ total.

It would ultimately prove to be enough, despite the best efforts of Bangladesh openers Sharmin Akhter (34) and Shamima Sultana (27) in laying a solid foundation with their chase.

It's a quick turnaround for Bangladesh, who are back in action against tournament hosts New Zealand from 10pm on Sunday, while South Africa have until Friday, 1am, to prepare for their clash with Pakistan.

England, following defeat to Australia in their opening group game, are next in action against the West Indies - who opened the tournament with an upset win over New Zealand - from 10pm on Tuesday evening.

Watch every game of the Women's Cricket World Cup live on Sky Sports Cricket, with Pakistan and India meeting next, live from 1am on Sunday.