Kolkata Knight Riders chased down 124 to beat Punjab Kings by five wickets and move off the bottom of the IPL table thanks to an unbeaten 47 from England white-ball captain Eoin Morgan; Chris Jordan's 30 from 18 balls and Ravi Bishnoi's stunning catch for Punjab came in vain 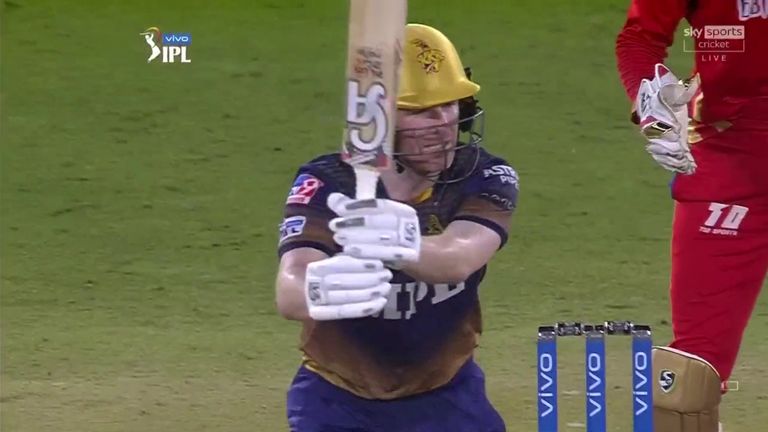 The KKR skipper came in with his side 17-3 early on in their chase of 124 but was typically calm under pressure, putting on 66 with Rahul Tripathi (41 from 32 balls) as he batted through to the end, finishing unbeaten on 47 from 40 balls.

Kolkata's bowlers, led by Prasidh Krishna (3-30), had restricted Punjab to 123-9 and it took a quickfire 30 from 18 balls from Chris Jordan late on to get them there.

However, a five-wicket victory was sealed with 3.2 overs to spare and although it was not always as comfortable as that would suggest, especially for a Kolkata side aiming to end a four-match losing streak, Morgan's composed knock allowed KKR to avoid any nerve-shredding late drama.

Having been put into bat, Punjab's openers struggled to find any rhythm early on as the KKR seamers bowled with discipline and were eventually rewarded when KL Rahul (19) fell to Pat Cummins in the last over of the powerplay.

Morgan chose to keep the impressive Shivam Mavi (1-13) going straight through and the plan paid off in the fast bowler's fourth and final over when he had Chris Gayle caught behind for a golden duck.

Prasidh dismissed Deepak Hooda (1) in the next before Kolkata spinners Sunil Narine (2-22) and Varun Chakravarthy (1-24) took hold through the middle overs.

Punjab slumped to 98-8 early in the 19th over and it took three sixes from Jordan in what remained of the innings to get them anywhere close to a competitive total.

Chris Jordan (30 from 18) thumps a pair of sixes before being bowled in the last over by Prasidh - valuable runs as Punjab set #KKRHaiTaiyaar 124 to win. #IPL2021

Three overs into the Kolkata reply, though, the Kings were jubilant and the target of 124 looked a long way off for Morgan's side.

Nitish Rana had gone first ball after hitting a juicy full toss from Moises Henriques (1-5) straight to cover, Shubman Gill (9) had been trapped plumb lbw by Mohammed Shami (1-25) and Sunil Narine (0) had fallen victim to a wonder catch from Ravi Bishnoi; the fielder sprinting around the rope and diving full length to pouch the ball just inches from the turf. Morgan joined Tripathi in the middle and, after hitting an early six over square leg and adding a couple more boundaries before the powerplay was over, the England limited-overs captain was content to largely work in singles.

Tripathi took a similar policy as they whittled away at the runs required but was quick to punish any loose deliveries, hitting seven boundaries before holing out in the 11th over.

Andre Russell (10) came in with 41 runs still needed but failed to really get going and eventually ran himself out trying to get through for a quick single to set a few KKR nerves jangling again.

MORGAN ON THE CHARGE! 🔥

The KKR skipper takes his side to the brink of victory as he moves into the 40s by going four, six off Deepak Hooda. #PBKSvKKR #IPL2021

Morgan and Dinesh Karthik soon settled them, though, the former springing to life late in the 16th over to hit Hooda (1-20) for four through extra cover and then launching the next ball for six over the same region, leaving Karthik (12no from six) to finish the job with a pair of boundaries in the next over.

The win takes KKR from the bottom of the table up to fifth, level on points and a place above the Kings.