Nat Sciver starred with bat and ball and Tammy Beaumont struck a second half-century in as many matches as England Women wrapped up an ODI series win over New Zealand with a game to spare.

Sciver's 3-26 helped limit New Zealand to 192 all out in the second ODI in Dunedin before she struck 63 off 61 balls in a 103-run stand with Beaumont (72 not out) for the third wicket as England reached their victory target with 74 balls to spare - Amy Jones adding a quick-fire 46 not out.

England's seven-wicket victory gives them an unassailable lead in the three-match series after they won Tuesday's first ODI by eight wickets, a game in which Beaumont top-scored with 71.

Sciver said: "We haven't played ODIs for quite a long time so coming into this series we wanted to hit the ground running. I think we are in a really good place and hopefully we can wrap up victory in the third ODI."

Heather Knight's side - now on a 10-match winning streak across all international formats - bossed most of Friday's game at University Oval, although New Zealand did launch a decent fightback with the bat before reducing the tourists to 12-2 early in the run chase.

Sciver and Katherine Brunt (2-34) struck twice each inside the first eight overs before fellow seamer Kate Cross (1-23) had Amy Satterthwaite (13) caught behind on the cut in the 14th over as the White Ferns tumbled to 34-5 after electing to bat.

On England's bowling, Sciver added: "We always want to be aggressive and take wickets and today it came off. 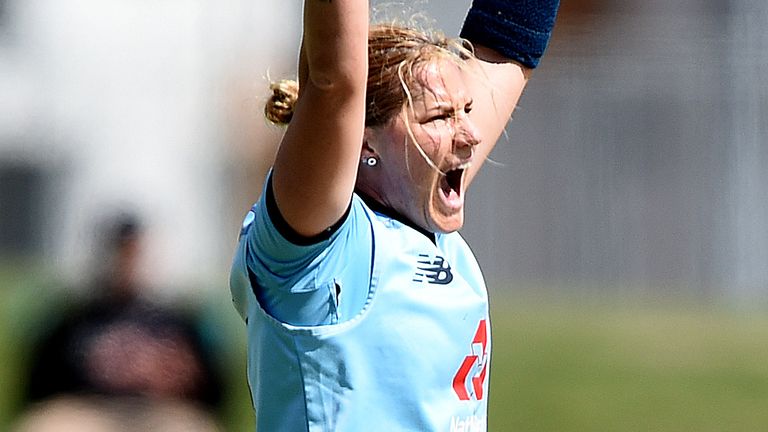 She has had a couple of net sessions that I wouldn't be signing up to bat in! She has had good preparation and been brilliant.

"Katherine [Brunt] was very aggressive with the ball and made it difficult for the batters and I managed to come on from the other end and help out.

"We probably had the best of conditions. That can be a pressure but we managed to put it in the right areas and keep the pressure on."

Brooke Halliday (60) rallied New Zealand from five down with her second half-century in succession before she fell to Sciver, while Hannah Rowe (29no) and Jess Kerr (28) put on 53 for the ninth wicket as the hosts gave themselves something to defend.

A post shared by We Are England Cricket (@englandcricket)

New Zealand further boosted their chances with the early wickets of Danni Wyatt (0) and Knight (8) - Wyatt chopping Kerr onto her stumps in the first over of the chase and Knight run out by opposition captain Sophie Devine from cover at the start of the third.

Beaumont and Sciver led England out of that tricky position, with their 103-run stand coming in just 127 deliveries.

Sciver, who struck five fours and a six, was caught off Halliday at midwicket in the 24th over as the bowler bagged her maiden international wicket, but Jones then hit eight fours in 45-ball 46 not out as she and Beaumont eased England to victory with an unbroken stand of 79.

Jones passed 1,000 ODI runs during her knock, while Beaumont, who totalled seven fours in her 112-ball knock, became the sixth England Women player to top the 2,500-run mark in ODI cricket.

England will now be aiming to wrap up a series sweep by winning the third and final ODI, also in Dunedin, on Sunday before the sides meet in a three-match T20 international series.