Fabulous Fallon Sherrock sets up quarter-final showdown with Peter Wright at the £550,000 tournament. We're back on Friday - live on Sky Sports Arena from 7pm, where Rob Cross takes on James Wade before two dragons collide with world No 1 Gerwyn Price up against Jonny Clayton

Fallon Sherrock continued her tungsten fairytale at the Grand Slam of Darts after defeating Mensur Suljovic 10-5 to reach the quarter-finals in Wolverhampton on Thursday.

Superstar Sherrock raised the roof at the Aldersley Leisure Village with another remarkable performance to defeat the Austrian with three maximums and a 90.58 average to set up a mouth-watering last eight clash with Peter 'Snakebite' Wright.

Wright dethroned Jose de Sousa in a final leg shootout after coming out on top in a disjointed performance, hitting eight 180s but averaging just 90.41.

Michael Smith came close to landing a nine-darter in his win against Joe Cullen as he made it through to the quarter-finals for the third straight year.

Super Sherrock does it again History-maker Sherrock went up against Suljovic in a repeat of their World Championship classic and it didn't disappoint.

'The Queen of the Palace', who produced an inspired comeback to stun Gabriel Clemens and create another moment of sporting history on Tuesday night, famously defeated the Austrian to reach the third round at Alexandra Palace in 2019 and she was out to repeat her feat. 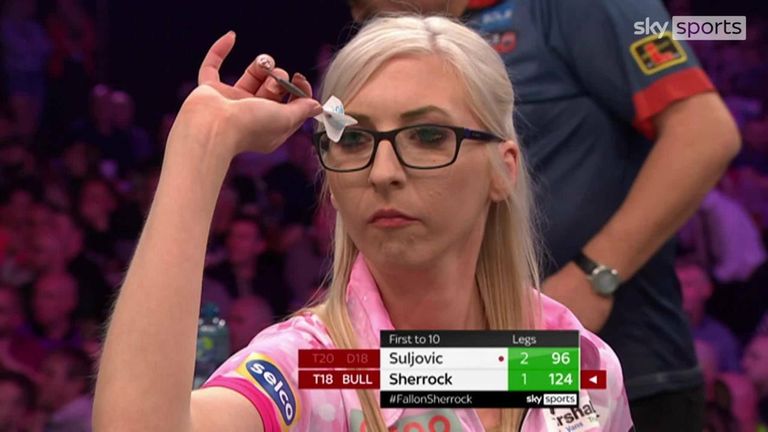 But the former Champions League winner was out for revenge and he made the more composed start to take a 2-0 lead before the boisterous crowd rose to their feet following a superb ton-out 11-dart leg, and a stunning 124 on the bullseye from Sherrock.

She made it three legs on the spin, nailing double nine to lead 3-2 before sinking double five after Suljovic failed with five missed darts at doubles. 'The Gentle' was averaging below 80 and Sherrock took full advantage with another sublime bull-finish for 5-3.

The 27-year-old then made it six out of the last seven legs for 6-3 before Suljovic stopped the rot.

However, Sherrock broke again with a 15-darter to edge closer. A classy 106 checkout on tops kept Suljovic in the match but Sherrock stormed to victory in the next leg, wrapping things up with a double nine after 14 darts to become the first woman to ever reach the last eight of a PDC televised ranking event.

Yes she can! Wonder Woman in Wolverhampton 🎯 https://t.co/9UCVzu0Og5

The remarkable Fallon Sherrock continues to do remarkable things in #darts as she convincingly beats Mensur Suljovic to reach the Grand Slam Q/Finals #SkySports 😎 pic.twitter.com/K2zZFQMnxw 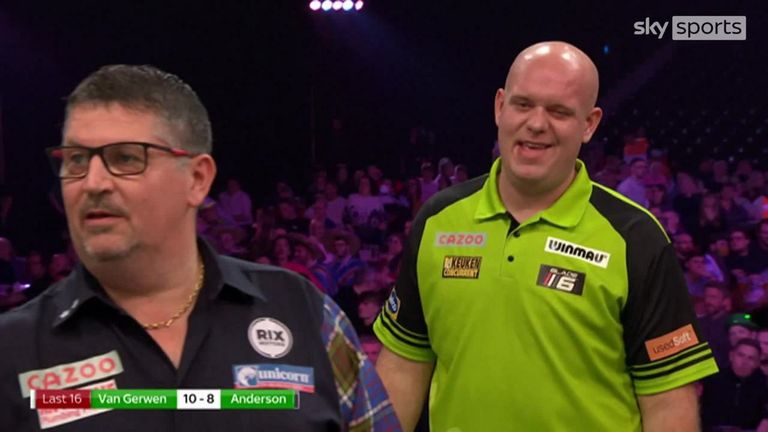 Two legends of the game went toe-to-toe on the big stage and they lit the blue touch paper with a blistering opening five legs.

Anderson converted a superb 124 checkout on the bullseye for a 12-dart break and kept his nose in front at 4-3 with four 180s and a 104 average. But the Dutchman fired in a 116 checkout to level it up on his way to reeling off three legs on the spin.

The players exchanged words on the stage in the 12th leg. That appeared to put Anderson off his rhythm, with Van Gerwen taking full advantage. The former world champion quickly regrouped to hold his throw, but Van Gerwen maintained his lead with a brilliant 11-darter for 8-6. 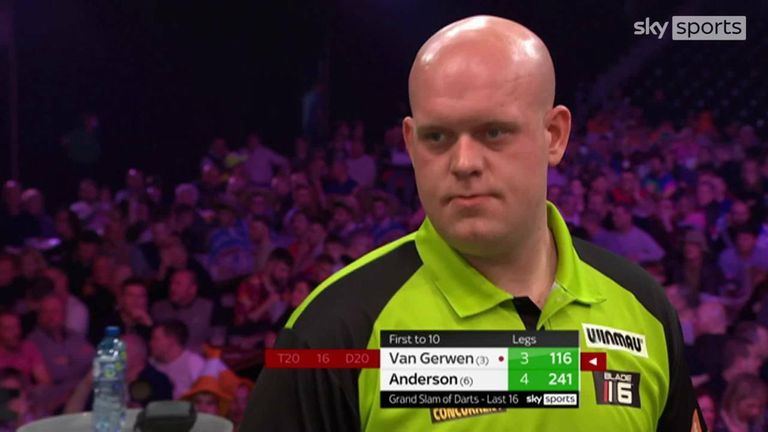 Anderson had chances to break back, but he failed to take them. There was more drama when Van Gerwen missed four match darts at 9-7.

'The Flying Scotsman' held but could not force a deciding leg and the former world No 1 got over the line with double eight.

Very happy with the victory tonight. Gary pushed me as he always does but my game in a strong place and only getting stronger. Now my focus is on the quarterfinals on Saturday night. Thank you for the phenomenal support 💚💚 pic.twitter.com/zuGWY95FOo 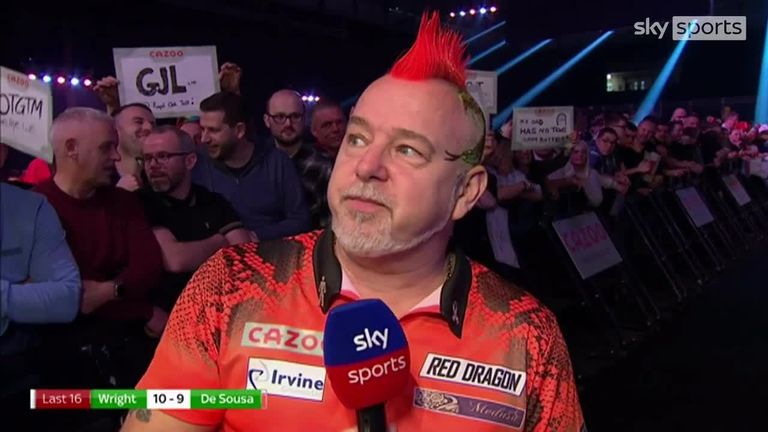 De Sousa continued his title defence against world No 2 Wright in a match which had all the makings of a very tight encounter and so it proved, with the Portuguese star taking a 3-2 lead before the first interval.

It was very much nip and tuck until 'The Special One' swooped in the 10th leg with a timely 174 and 32 to head into the break with a 6-4 advantage.

Wright came out firing maximums with his back against the wall, responding with a superb 12-dart leg and then levelling at 6-6 after taking out 68. He nailed an 80 checkout to win his third consecutive leg, but wasn't able to consolidate his lead, with his opponent pinning double four to make it 7-7. 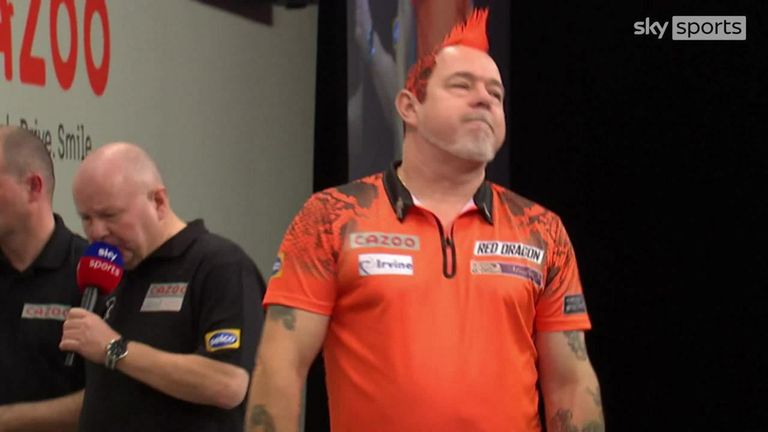 The 51-year-old Scot was feeling the heat but he somehow scrambled his way to a hold of throw with double 16, having appeared on the brink before sinking 82 to hit the front at 9-8.

World Matchplay champion Wright threw for the match, but he failed to convert five match darts, and that allowed De Sousa in for double 10 to make it 9-9 and send the contest the distance.

However, Wright eventually dethroned De Sousa when he landed double 16 to make it through and breathe a huge sigh of relief. 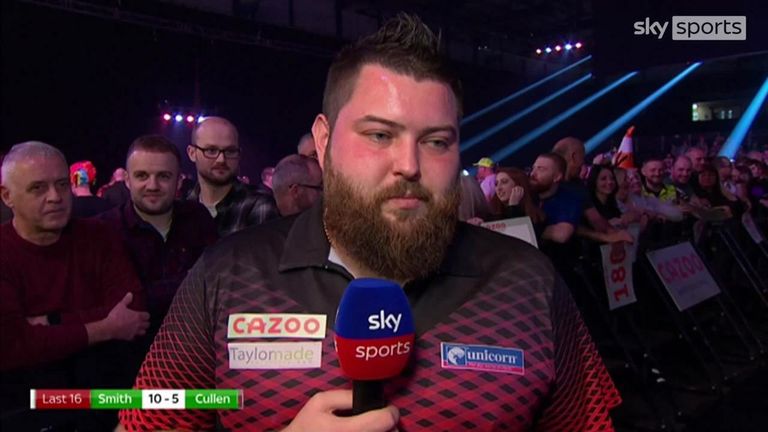 Former semi-finalist Smith went into his last 16 meeting with Yorkshireman Cullen having come through the group stage with a 100 per cent winning record and was aiming to win his maiden major TV title, which has continually eluded him.

The St Helens thrower made the better start and had chances to extend his lead to 4-1, but he squandered darts at double one, allowing 'The Rockstar' to finally land double 16 and stay in touch at 3-2. 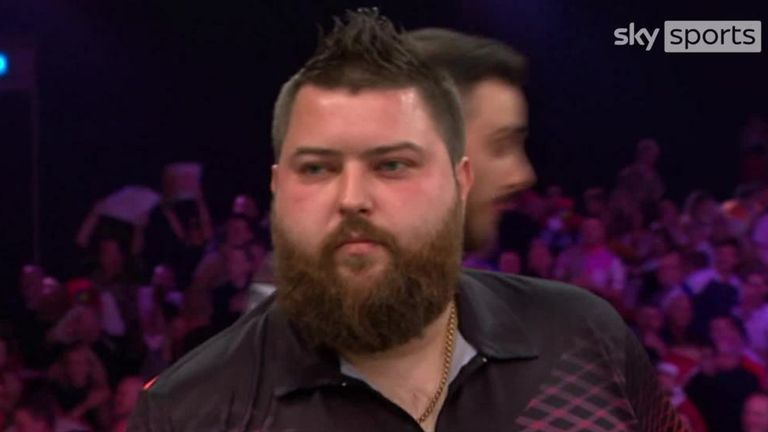 The pair shared breaks of throw following the first mini-break before 'Bully Boy' regained the upper hand at 4-3 and maintained his two-leg cushion to lead 6-4 in a race to 10.

Double five with his last dart in hand enabled Smith to move 7-5 ahead before he made his move by sinking tops and double nine to close to within one leg of going through.

Not my night tonight, too many missed chances early doors. But onto Minehead and the Worlds…. See you there 👍 thanks to everyone this week and my sponsors @CelElectrical @MarshallGroup @ModusDarts180 @bi_folds @FrameSmart @Winmau

He came within a millimetre of landing an epic nine-darter in the 15th leg, but Smith maintained his composure to complete a convincing 10-5 victory and take his place in the quarter-finals.

Don't miss a dart from the Grand Slam of Darts which continues all weekend from Wolverhampton's Aldersley Leisure Village - join us from 7pm on Sky Sports Arena this Friday night. Check out daily Darts news on skysports.com/darts, our app for mobile devices and our Twitter account @skysportsdarts