Michael van Gerwen and Michael Smith will face each other in Newcastle on the opening night of the Premier League - a repeat of last year's final and the World Championship final.

Fresh from his third world title, where be beat Bully Boy 7-3 in the Ally Pally finale, MVG will kick off his quest to continue his Premier League dominance against the man he also beat in May last year in the capital.

The world No 1 has reached the final in all six years he has played in the competition, topping the regular season standings on all six occasions - and more importantly going on to win the title four times, including each of the last three years.

In 2018 he chalked up a barely believable 112.37 average to beat Smith in The Docklands, whose memorable second year in the competition ended with a very respectable runners-up finish.

This year's action will kick off and it will be a clash for the former champions that gets the action underway with the returning James Wade up against surprise pick Raymond van Barneveld on Tyneside.

The Machine, a three-time finalist and champion in 2009, is back after a year off while 2014 champ Barney is beginning his final year as a professional having announced he will retire after the 2019/20 World Championship.

Glasgow's SSE Hydro get to welcome Gary Anderson on Night Two when The Flying Scotsman takes on Daryl Gurney and as is fast becoming tradition, Anderson will face Van Gerwen at a raucous BGHE Arena in Aberdeen, although this year it will be on Night Five.

The opening 10 rounds of action conclude with what promises to be a drama-filled two nights at Rotterdam's Ahoy when back-to-back nights finish with Judgement Night that will be headlined by Van Gerwen and Barney going head to head.

Barney pulled off a memorable victory over his younger countryman last year, and with the added drama of relegation on the night there will be more than pride at stake as the first stage reaches its conclusion.

After Night 10 in Rotterdam, the bottom two players will be relegated and the top eight will play out the remaining seven nights with the top four then moving on to Finals Night at The O2. 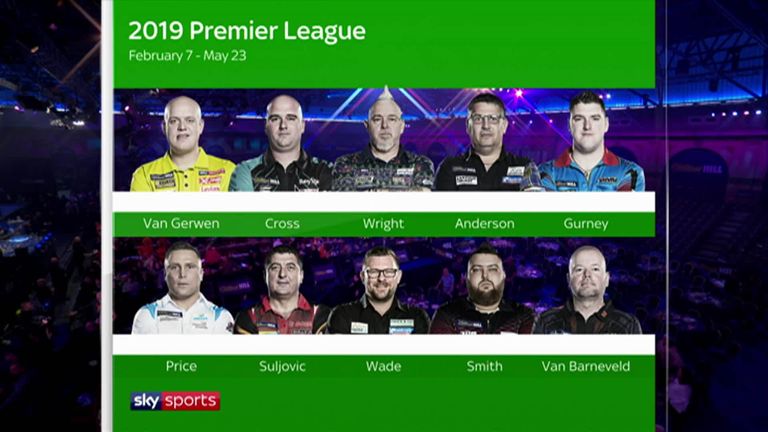 Fixtures for Nights 10-16 will be confirmed following Judgement Night.

Darts returns to your Sky Sports screens with the Premier League - 17 nights of top tungsten action gets underway in Newcastle on Thursday, February 7 on Sky Sports Action and Main Event from 7pm