Gerwyn Price on his greatest game in darts against Gary Anderson 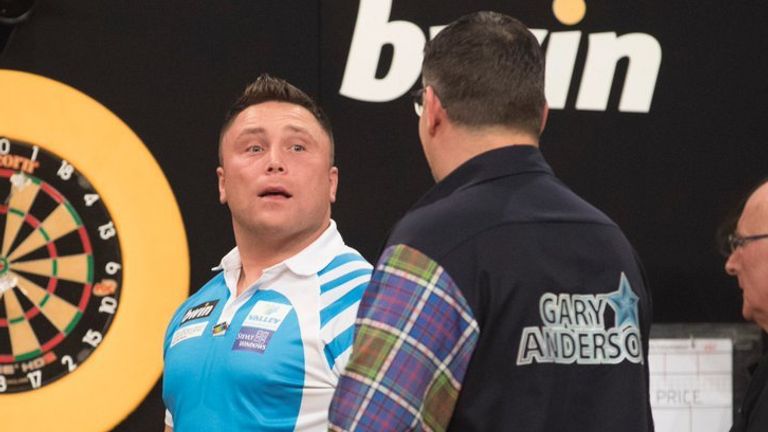 In the sixth instalment of our series, Gerwyn Price chooses his 2018 Grand Slam of Darts final against Gary Anderson as his greatest game.

With the 2019 Grand Slam of Darts starting this Saturday, live on Sky Sports, who can forget last year's fiery final between two of the world's best - will we see more fireworks on the oche this year?

Price qualified for the event having won the 2018 International Darts Open in Germany beating Simon Whitlock in the final and went into this tournament as a rank outsider.

The Iceman topped his qualifying group, and went on to beat Josh Payne, Simon Whitlock and Mensur Suljovic in the knockout stages as he made his way to the final to face Anderson.

The Scotsman established an early break to lead by two legs and went 7-4 up before the Welshman pegged it back to 7-7 as the pair exchanged words on the stage in what was about to become a heated affair.

"In the quarter-final and semi-final, Simon and Mensur had got away from me, at one point I was 10-5 down against Mensur but I never stopped believing. I knew that if that circumstance came along in the final then I would just fight my way back into it. I think there was a four-leg gap in the final, but I never gave up and as long as you stick on their coattails, they will start throwing some rubbish darts, which he did."

The Flying Scotsman then turned on the style to lead 11-8 but Price wouldn't back down and levelled the tie again at 13-13. There was no love lost between the two players with Anderson taking exception to Price's celebrations and pushing the Iceman on the oche as the rivalry intensified. Whilst Anderson seemed to lose focus, Price was thriving in the atmosphere and he was dominant in the latter stages as he went on and won 16-13 to claim his first major trophy.

"It's a great feeling to pick up any trophy but to win your first ever major and be the first-ever Welshman as well it means the world to me. The feeling on stage to beat an arch enemy was great."

It's not long to wait until darts is back on Sky Sports, the Grand Slam of Darts gets underway on Saturday, November 9 at Wolverhampton's Aldersley Leisure Village and nine days of coverage continues until the final on Sunday, November 17.