Michael van Gerwen discussed his "marathon plan" and shared he's going through a "tough time" after gaining revenge over Peter Wright on the opening-night of the Premier League Darts in Aberdeen.

The world No 1 is in pursuit of a sixth Premier League title and he commenced proceedings on the right note by putting to bed memories of his World Darts Championship final defeat with a 7-5 win.

Van Gerwen's victory was his first with his new darts and after, he reflected further on his reasons for changing arrows, something he announced a day after his loss to Wright at Ally Pally. 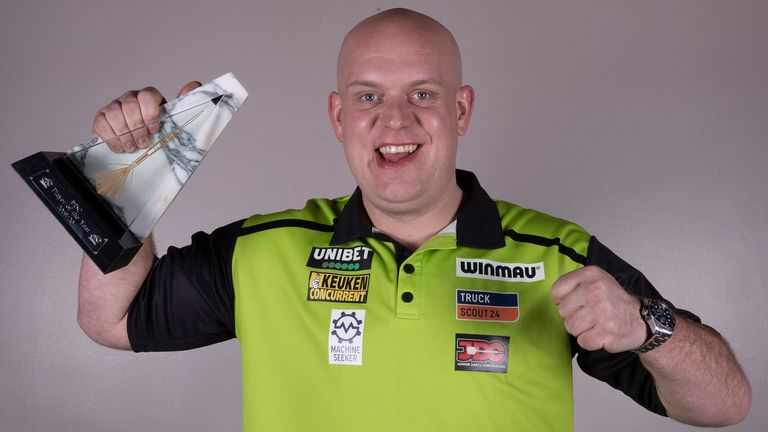 I want to have perfection every time. That's quite difficult sometimes.

"It was a big decision. Times change. It was also time for something really professional," he said. "I'm going to play darts for another 10/12 years so it's not a short-term plan.

"This is a marathon plan and I need to make sure that I do the right thing for myself. Last week at The Masters wasn't what I expect to do but it is the right choice for me. It takes some time but I'm feeling comfortable."

In Aberdeen, the world No 1 and 2 shared six 100+ finishes in a contest which saw both men average more than 100 until Wright faltered in the final stages.

"I can't complain to be fair," he said of his performance against Wright. "I had to work really hard and I have to say it was difficult.

"I'm going through a tough time at the moment because I want to show my performance.

"I have said to myself that I'm going to give myself three months, but I have high demands of myself. I want to have perfection every time. That's quite difficult sometimes."

MVG will now prepare for a trip to Nottingham for the second night of the competition where his opponent will be Daryl Gurney.

Gurney established a 5-4 lead against Gary Anderson before losing three legs on the spin and falling to 7-5 defeat.

Van Gerwen, who has never failed to reach the final in all seven of his Premier League campaigns, is ready for the challenge.

Over the moon with my victory this evening. Peter played well in the early stages, but I took my chances from there. 104 average wasn’t too bad 😉

Thank you to the amazing crowd here in Aberdeen this evening 💚💚.

Now on to Barnsley for the Pro Tour pic.twitter.com/4FKLqa9eZm

He said: "From here I can build. I think my sponsor Winmau are doing a great job for me. I always say to myself that I can do in practice, whatever I want with any darts.

"However, you have to do it on this stage, in front of all of these people and the people watching at home. That doesn't make it easy.

"The pressure on my shoulders is higher than this building. It's an incredible height and you have to do it [deliver] constantly.

"People keep telling me things but I know what I have to do. The total package has to be right; the darts, the mindset, the preparation and today it was good"

Coverage of the Premier League continues on Thursday, February 13 in Nottingham at 7pm on Sky Sports Action with 'The Sherrock of Nottingham' in action.