Gerwyn Price became the inaugural winner of the Belgian Darts Championship in Hasselt on Sunday, defeating Michael Smith 8-3 in the final.

In-form Price averaged over 100 in three of his five matches across two days at Expo Hasselt, as the Welsh No 1 claimed his third European Tour title on St David's Day.

With the final level at 2-2, world No 3 Price won five consecutive legs to take full control of the contest before hitting his favourite double top to land his 11th PDC ranking title and the £25,000 top prize.

The only undefeated player in the 2020 Premier League, Price is now also the only player with two PDC ranking titles to his name for the year.

"The crowd were fantastic all weekend, I appreciate everything from them," said Price, who won his first title of 2020 seven days earlier.

"I think my checkouts this weekend kept me in the games.

"I hit some big shots when I needed them most to change the way some games were going.

"I think I played pretty well all the way through the tournament and hopefully I can keep this form going into the Premier League and UK Open next week." 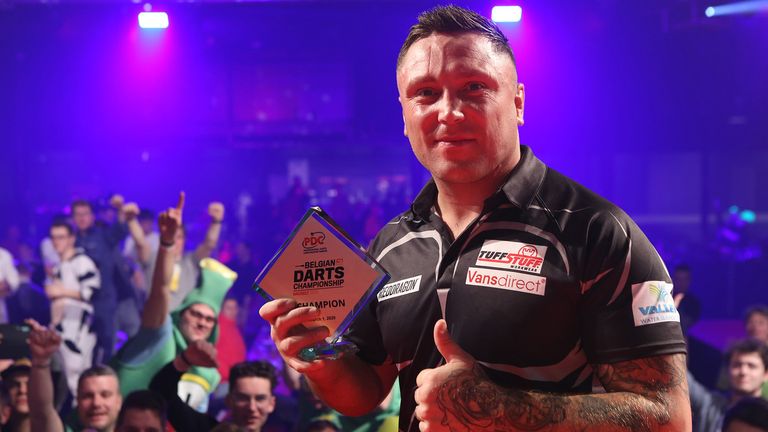 Hopefully I can keep this form going into the Premier League and UK Open next week.

It's another big week for the Iceman

Sunday saw the £140,000 event reach its climax, with the last 16 taking place in the afternoon session, followed by the quarter-finals, semi-finals and final in the evening.

Having whitewashed Jamie Hughes with a 105.93 average in the last 16, Price then defeated Mensur Suljovic 6-2 before recovering from 3-0 down to overcome Dirk van Duijvenbode 7-4.

Improving Dutchman Van Duijvenbode engaged and entertained the Belgian crowd throughout the weekend as a string of sparking displays saw him reach his first European Tour semi-final.

Meanwhile, Michael van Gerwen's wait for a first PDC title of 2020 goes on after he lost a deciding leg to Smith in the last 16.

The European Tour will return with the European Darts Grand Prix in Sindelfingen, Germany across the weekend of March 20-22.

Coverage of the Premier League continues on Thursday, March 5 from Westpoint, Exeter at 7pm on Sky Sports Action & Sky Sports Mix with Gary Anderson taking on 'Cool Hand' Luke Humphries. Don't forget, the Premier League is on every Thursday all the way through until the Play-Offs in London on May 21.