The World Darts Championship once again offers the winner a life-changing £500,000 prize along with the coveted Sid Waddell Trophy; Peter Wright makes a winning start while Diogo Portela becomes the first Brazilian ever to win a game at the Worlds; Canadian Jeff Smith also makes it through

Peter Wright donned a full Grinch costume with matching flights and stems to get the party started at Alexandra Palace as he began his quest to retain the World Championship title with a solid win.

Play started in front of a modest crowd of around 500 spectators at Alexandra Palace with 96 players contesting this year's title, 29 countries being represented, over 28 sessions, and 20 players making their debuts at the greatest darts tournament of them all.

Current title holder Wright famously exorcised his final demons by defeating Michael van Gerwen 349 days ago to become world champion for the first time, and the Scot began his quest to retain his crown with a very loud performance over Steve West.

An emotional Diogo Portela recorded his first ever win on the Ally Pally stage at the fourth attempt after dumping out the legendary Steve Beaton, while Jeff Smith tamed Irish ace Keane Barry to also make it through.

I hope you enjoyed night one of the World Darts Championship. The Grinch stole the show! Rightly so!

Tuesday's results at the Worlds

Wright began his quest to regain his world title with a solid display of arrows against West.

Snakebite made a flying start by winning all three legs of the opening set, with a 102.5 average. He continued to hand out more punishment to West as he doubled his lead without dropping a leg.

West had eased past 25-year-old Indian qualifier Amit Gilitwala in the opening match of the tournament. West dropped just one leg en route to a meeting with Wright.

But he was finding life much harder against world No 2 Wright, who looked like a man on a mission.

West kicked off the third set with back-to-back 180s before landing tops for a 13-darter to stop the onslaught and he quickly doubled his advantage with a neat 72 finish. Wright replied with a magnificent 144 checkout, but West finished off 67 to make things interesting.

A second ton-plus finish of 101 gave the world champion the lead in the fourth set and although West replied, Wright took out 71 to move a leg away and he got the job done after landing his fifth match dart.

Wow. What a walk-in by @snakebitewright really enjoyed that. The grinch playing darts. Never thought I’d ever see that.

Beaton did not enjoy his record-breaking 30th Worlds as he was swept aside 3-0 by Brazil's Portela.

The 1996 Lakeside world champion broke Phil Taylor's record number of appearances but the 56-year-old made a nervy start to the contest and Portela punished him by breaking throw and then wrapping up the opening set 3-1 after taking out 69.

The Bronzed Adonis was averaging just 79 when he fell further behind as the Brazilian pinned D4 to move one set away from a meeting with Premier League champion Glen Durrant on Wednesday evening.

Portela took out 48 to break his veteran opponent in the third set and he then held throw with a neat 15-darter. Beaton pulled one leg back, but it was all over in the next as Portela took out 85 before breaking down in tears. 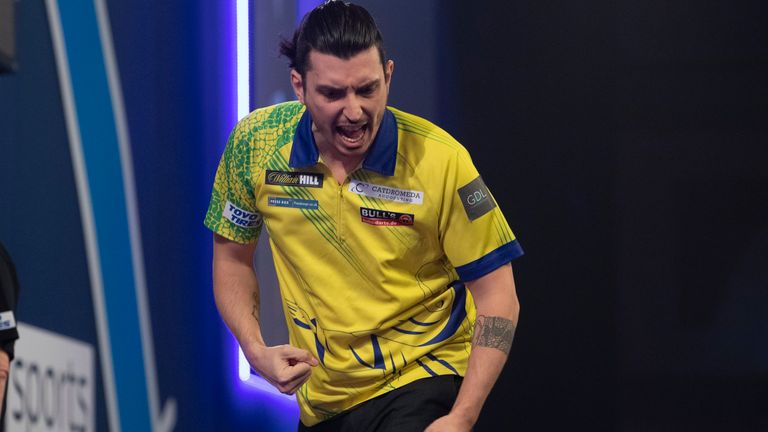 "It’s going to be hard him to play him because of Glenn’s methodical way of playing. Diogo himself is not that rapid but it will be difficult. The PDPA have to be commended here because Diogo was having kind of mental stress with all that was going on and he looked to them to sort out some counselling for him. The Professional Darts Players' Association sorted him out a counsellor and he’s been seeing him for the last months, so they have to be thanked. I've been their harshest critic over the years, but hats off to them for doing that."

Cheers everyone thanks for all the nice comments been a bad night for me been a bad year really but it’s the same for everyone. Practising really well just can’t seem to take it up on the stage. You’d think after all these years that wouldn’t be a problem lol.
Have a Great Xmas

Wednesday Afternoon at the Darts (12pm)

Smith lost the opening leg to the 18-year-old from Drogheda, but he then hit back to win three on the spin and take the opening set despite an average of just 80.

Barry's double trouble continued in the second set with 17 missed darts at doubles costing him as Smith used his years of experience to extend his lead after pinning D10.

The teenager hit a superb 14-darter to clinch the third set and keep his hopes of making progress alive.

And although there were four breaks of throw in the fourth set, former Lakeside finalist Smith got the job done when he pinned D4 with his first match dart to set up a second-round meeting with Chris Dobey on Wednesday afternoon. 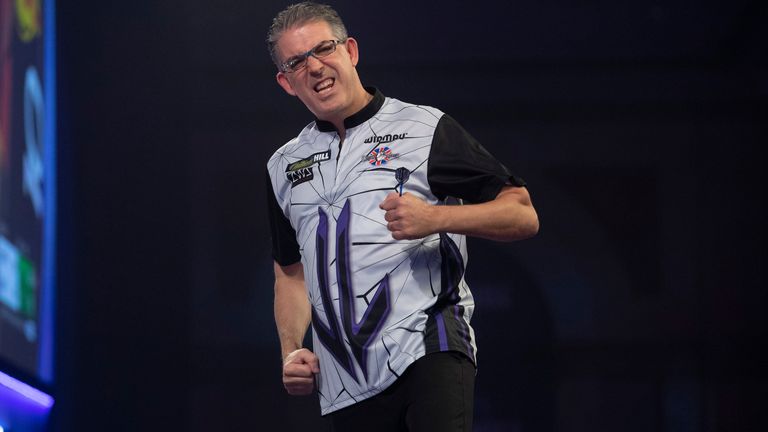 "I'm happy with that win tonight. When I got drawn against Keane I knew it would be a tough match and he put me under real pressure there. It's been a fantastic year for me on the board, even with all the restrictions. Kudos to the PDC for putting the tournament on at all. I'm looking forward to playing Chris [Dobey], we've had a couple of good battles and I'm sure we will have another one tomorrow."

Jeff Smith on making it through at Ally Pally

Wednesday Evening at the Darts (6pm)

The darts continues on Wednesday with a double dose of tungsten action. Ireland's William O'Connor and Chris Dobey are in afternoon action before the evening sees Lisa Ashton and Premier League champion Glen Durrant take to the stage.

You won't miss a dart this Christmas thanks to the dedicated Sky Sports Darts channel all the way until January 4 with every session from the World Darts Championship, including the final on Sunday, January 3. Check out daily Darts news on skysports.com/darts, our app for mobile devices and our Twitter account @skysportsdarts