"I will probably always be involved in the game until I drop or when my memory fails me but I'm still loving it. I have my moments!"

Deta Hedman is a darting pioneer - instrumental in putting women's darts on the map. Later this year, Hedman will become the second oldest debutant in PDC World Championship history and you'd struggle to find anyone that begrudges her this moment in the spotlight.

The Jamaican-born veteran boasts a remarkable résumé, having amassed more than 200 titles during a career spanning over four decades, and now she's preparing to etch her name into the history books once again following her success at the PDC Women's Series.

Hedman displayed tremendous consistency across the four events and courtesy of her Event Two triumph on Saturday, she edged out Fallon Sherrock to join Lisa Ashton in qualifying for this year's Alexandra Palace showpiece, where she'll become the sixth woman to feature in the event.

It's been a groundbreaking year for the women's game - Sherrock making history by becoming the first woman to register victory at the PDC World Championship, coupled with Ashton securing a Tour Card via Qualifying School - the first woman to do so.

However, Hedman is a trailblazer in her own right. Despite the exploits of her contemporaries, Hedman was the first woman in darting history to record a televised win over a male opponent, toppling Aaron Turner at the 2005 UK Open.

The 60-year-old has broken down barriers since taking up the sport in the mid 80s, challenging the status quo within a white, male-dominated environment, therefore it's fitting that during Black History Month, she becomes the first black woman to qualify for the PDC Worlds.

There can be no denying Hedman's legendary status, although being such a figurehead can be a burden, which is why her self-effacing nature has been integral to her success.

"I never really think about that. I think that's probably why I do so well because I don't really focus on things like that," she told Sky Sports prior to the inaugural Women's Series.

Women to have competed at the PDC Worlds

"I've grown up from the age of 14 in England, so I don't really look at it being a black woman and fighting for this and that. I just go about my business. I just see myself as a person playing darts as it is and enjoying it."

However, the events of 2020 have brutally exposed the issue of racism and having been subjected to such vulgarity, Hedman insists it's still a prevalent stain on sport and society.

"It's still there even now, believe you me. It hasn't gone away. I don't think it will ever go away because that's how some people are," added Hedman, who recounts a disturbing incident in the Czech Republic a few years ago.

"That one was pretty dire. They said: 'I didn't know they taught monkeys to throw darts'. You cannot dress that up at all. That is just racist."

Hedman also received a sickening racist tirade following defeat at the 2019 BDO World Championship, but this simply strengthened her resolve, which she admits wasn't always the case during the fledgling stages of her career. 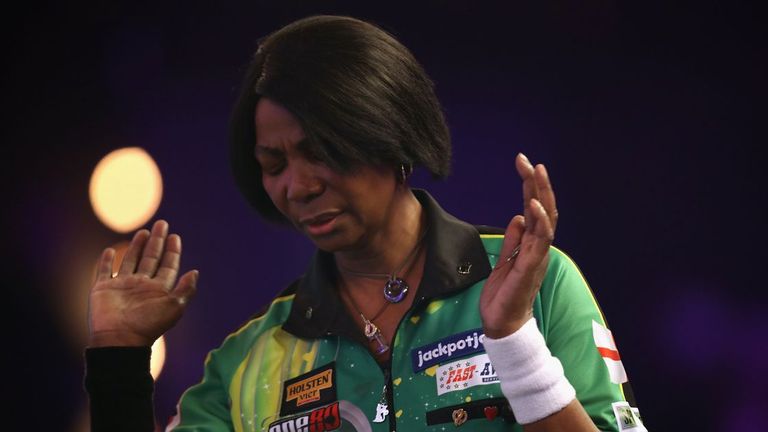 "I dropped out of the sport for a few years and took a back seat, just to clear my head. I returned obviously and I think I returned a stronger person."

Hedman on encountering racism in darts...

Having been selected to represent England in 1997, Hedman cited work commitments as the reason for stepping away from the game, but the reality was very different.

"There was just one incident too many and I'd lost enjoyment. I just said to Olly [Croft, BDO founder who died in 2019] who is no longer with us, I sent him a letter to say I'd lost enjoyment of the game, I wouldn't go to Australia to represent England with the way I was feeling.

"I dropped out of the sport for a few years and took a back seat, just to clear my head. I returned obviously and I think I returned a stronger person. The rest as they say is history!"

There is certainly plenty of history where Hedman is concerned. She began competing in the British Darts Organisation in 1987 and her breakthrough came with an appearance in the 1990 World Masters final, a tournament she would win four years later.

Fast forward three decades and she's still competing at the highest level with an illustrious trophy haul to boot, although the World Championship title - the sport's biggest honour - has thus far proven elusive.

Despite enjoying 11 separate spells as world No 1, Hedman has succumbed in three World Championship finals over the last decade, so it's ironic that the PDC World Championship offers her the opportunity to fulfil her darting dreams.

Longevity is usually a strong barometer of quality and Hedman is in a league of her own in that respect, which is made all the more admirable by her gruelling work schedule which she's maintained for the last 25 years.

The two-time World Master works four 13-hour night shifts per week at the Royal Mail and made the trip to the Barnsley Metrodome fresh from a 4am finish, but her insatiable passion for the sport drives her on.

Nicknamed 'The Heart of Darts' due to her work with the charity that offers support to disabled children, Hedman is also England Youth ambassador and concedes she is likely to always be involved in the game in some capacity.

"I think it's having the love and enjoyment that I still do when I play and meeting up with some great friends," she continued.

"I'll just see where it takes me. I will probably always be involved in the game until I drop or when my memory fails me but I'm still loving it. I have my moments!"

The Women's Series was a landmark event for Hedman personally, but it was also a celebration of the progress made in the women's game during recent years.

She made her BDO World Championship debut back in 2010 - a tournament comprising just eight players. However, the Women's Series featured 82 entrants, with 11 nationalities represented.

It's indicative of the sport's growth and testament to Hedman's class that she was still able to advance, and she believes this progress will be accelerated with further investment and opportunity for the women's game.

"You have Mikuru [Suzuki], Lisa and Fallon who have taken the game to another level. You have another young lady called Beau Greaves who I think is going to be phenomenal.

"If the opportunity is there like the men's in the PDC then I think you will see the ladies game change again. The standard will be so high it's unbelievable. It is there. Some of the ladies do have the game and it's like any sport. It's whether you really want it."

What a weekend congrats Lisa unlucky Fallon , but this old bird is going to the palace! @OfficialPDC @BarryHearn @Big5SportsMana1 @LstyleTsuyoshi @LstyleEurope @One80Dart .
Thanks PDC officials and staff at Barnsley Metrodome and at Holiday Inn Dodworth

'The Heart of Darts' is well aware of the demands of top-level sport. Her brother Rudi was a professional footballer who played for Crystal Palace, whilst nephew Graham - a 400-metre runner - was a silver medallist at the 2006 European Athletics Championships.

Hedman is also not the only member of her family to possess darting pedigree. Her brother Al was British Open champion in 1995 and she will now become part of the first brother and sister combination to compete at the PDC Worlds, after Al was beaten by Bob Anderson in the 2003 edition.

Nevertheless, whether she will do so in the presence of a crowd at Ally Pally remains to be seen, given the current uncertainty surrounding the coronavirus pandemic.

Nobody would be more deserving of a rapturous reception than one of the sport's all-time greats, but irrespective of the circumstances, it will still be a moment to cherish.

Darts in back on Sky Sports in November with a double bill, starting with three days of coverage from the World Cup of Darts (Nov 6-8) and continuing with nine days of the Grand Slam of Darts which gets underway on November 16.