Dirk van Duijvenbode has enjoyed a breakthrough year, featuring a first appearance in a major televised final; the enigmatic Dutchman takes on Premier League champion Glen Durrant for a place in the last eight

This time last year, Dirk van Duijvenbode was preparing for PDC Qualifying School, having relinquished his place on the Pro Tour circuit. What a difference a year makes.

Fast forward 12 months, and following a five-year hiatus, the Dutchman returned to Alexandra Palace as a major finalist, and now he's one win away from securing a place in the world's top 32 for the first time in his career.

It has been a remarkable ascent up the ranks for the 28-year-old - a 66/1 shot with the bookmakers ahead of this year's World Championship, despite only registering his first win on the televised stage two months ago.

Van Duijvenbode has gone from strength to strength since regaining his PDC Tour Card in January, the second time he's done so via Qualifying School. That is testament to his resolve, which he has displayed in abundance throughout 2020.

Following his Q School exploits, Van Duijvenbode reached his first senior PDC ranking semi-final on the opening weekend of Players Championship action, followed by a run to the semi-finals of the Belgian Darts Championship less than one month later.

'The Titan' became the first player to reach the Grand Prix final on debut since the tournament's inception in 1998, and the first Dutchman outside of Michael van Gerwen or Raymond van Barneveld to reach a major ranking final since 2007.

His dreams of glory were curtailed by a ruthless Gerwyn Price, but even his most ardent supporters would have struggled to envisage such success in the double-start event. 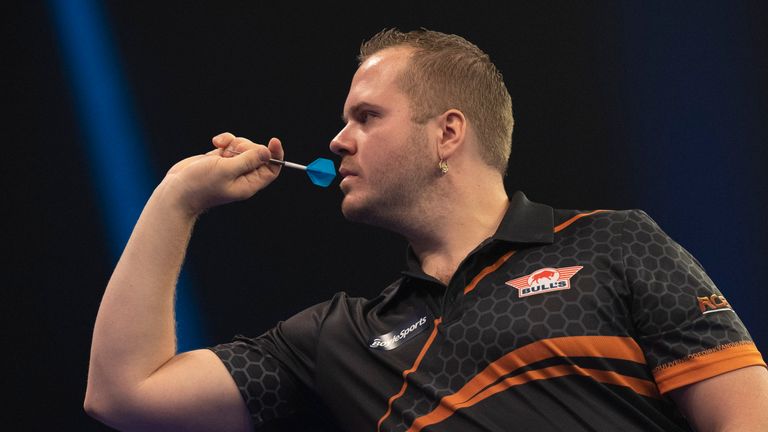 The mental side of your game is probably 30% of your performance, and denying that you have mental problems because you think you're too good for that, I think that is a weakness.

Van Duijvenbode on the mental aspect of the sport

He's since proven that his Grand Prix performances were no fluke, registering quarter-final appearances at the European Championship and Players Championship Finals, adding wins over Michael Smith and Peter Wright to his résumé.

He underlined his growing maturity with a superb comeback victory over World Youth champion Bradley Brooks in his Ally Pally opener, reeling off nine consecutive legs to from two sets down to book his place in round two.

The Dutchman then claimed the scalp of 2018 champion Rob Cross, courtesy of a 12-dart break in a thrilling last-leg decider, before sweeping aside Adam Hunt in straight sets, averaging over 104 and converting three ton-plus finishes.

"These results are obviously good but you need to have your feet to the ground," Van Duijvenbode told the Darts Show podcast.

"I don't take it for granted that I can make the quarter-finals in every TV event." 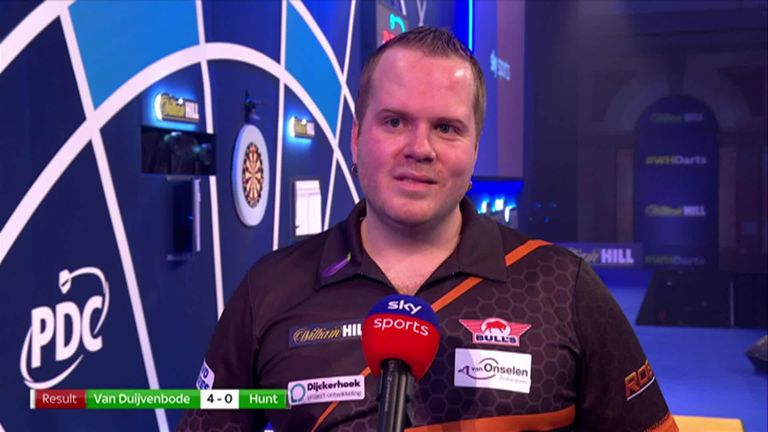 Despite this, a quarter-final spot is within touching distance for the Dutchman, as he prepares to take on Premier League champion Glen Durrant in the last 16 on Wednesday.

Speaking after his emphatic victory over Hunt, Van Duijvenbode told Sky Sports' Michael Bridge: "I felt there was more in the tank today.

"The first two games I was a bit disappointed that I didn't show the game I was practising on stage and now I feel like I'm starting to show it on stage.

"Those two games at the Grand Prix [vs Suljovic & Van den Bergh] made me feel comfortable on stage now, and not being scared of the camera anymore."

Despite his relative inexperience on the big stage, Van Duijvenbode is no novice. He reached his first final on the PDC Youth Tour in 2011 and won through to two Challenge Tour finals in 2013 - succumbing on all three occasions.

He made his Ally Pally bow in 2016 against fellow countryman Raymond van Barneveld, although his debut was marred by infamously hitting a 180 to bust his score during a humbling straight-sets defeat.

What should have been a proud moment descended into a nightmare evening against the five-time world champion, although he is certainly making amends this time around.

"Of course I remember that," he quipped. "I went to mental coaching this year for the first time, and I think I'm well prepared for not making the same mistake again.

"I feel like I have to make something right for that performance. I want to deliver a good performance in the Worlds, so people will forget about that one hopefully."

The recurring theme when analysing Van Duijvenbode's rise is ambition. Such was his frustration at not fulfilling his potential, he vowed to quit the sport if he failed to secure his World Championship return by the age of 30.

He also spoke openly about improving the mental aspect of his game. Many professionals may be reluctant to discuss this in such candid terms due to a perceived show of weakness, but Van Duijvenbode thinks otherwise.

"I think it is weakness if you see it as a weakness. The mental side of your game is probably 30% of your performance, and denying that you have mental problems because you think you're too good for that, I think that is a weakness.

"I've had a few changes this year that have made me a better player. I never practised a lot - I practiced two or three nights a week at most, because I always got injuries, and I would end up playing worse than before I was practising.

"I stopped practising because of that reason and when I got my Tour Card back this year, I was thinking: 'You need to do it right now'."

However, one change Van Duijvenbode insists he won't be making involves his work as an administrative assistant on an aubergine farm in the Netherlands.

There are examples of established players who balance work commitments with the unrelenting PDC circuit - Jonny Clayton has been on the periphery of the world's top 10 but still works full-time as a plasterer.

Such are the rigours of competing amongst the world's elite to earn a living, having the security blanket of a sustainable income can alleviate some of this pressure.

Yet despite the prospect of a place in the world's top 32 looming large, the 28-year-old insists he will not be tempted by calls for him to take the plunge and make darts his full-time occupation.

"I will keep on working because I think if you don't play Premier League, it's only busy from October to December," Van Duijvenbode added.

"In my work, it's not a busy time, so I can combine it easily and I work in the office, so I can bring my laptop with me during a few events. I brought it with me for the Grand Slam, the Winter Series and the World Grand Prix.

"I won't make the same hours but I can still do my important work, so I can combine it and I like it. I'm here because of them, so I don't want to leave when it's finally going well."

It is a method that has served him well throughout 2020, although Van Duijvenbode's immediate focus is centred around World Championship redemption.

He cut a forlorn figure in his last Ally Pally outing, but he's already reaffirmed his credentials over the last fortnight, and with seeds tumbling at an alarming rate, the 'aubergenius' may sense an opportunity to create another slice of history.

Don't miss a dart this Christmas thanks to the dedicated Sky Sports Darts channel all the way until January 4 with every session from the World Darts Championship, including the final on Sunday, January 3. Check out daily Darts news on skysports.com/darts, our app for mobile devices and our Twitter account @SkySportsDarts