The world No 1 averaged 103.90 and hit eight maximum 180s in a one-sided final to win the Grand Slam for a third time and claim the £125,000 first prize and a seventh major televised crown

Wayne Mardle believes Gerwyn Price can continue to dominate in darts, after the world No 1 scooped a third Grand Slam title in four years with a 16-8 victory over Peter Wright on Sunday.

In a battle between the world's top two, 'The Iceman' ran out a comprehensive winner in a repeat of the 2019 showpiece, to maintain his remarkable record of being the only player to lift the Eric Bristow Trophy at Aldersley Leisure Village.

Price was nowhere near his blistering best early in the tournament, suffering a surprise group-stage defeat to Martin Schindler, surviving a match dart against Nathan Rafferty and scraping past World Youth champion Bradley Brooks in the last 16.

Nevertheless, the world champion produced a fine display to thwart his Welsh compatriot Jonny Clayton in a thrilling quarter-final tussle, before saving his best performances of the tournament for Finals Day. 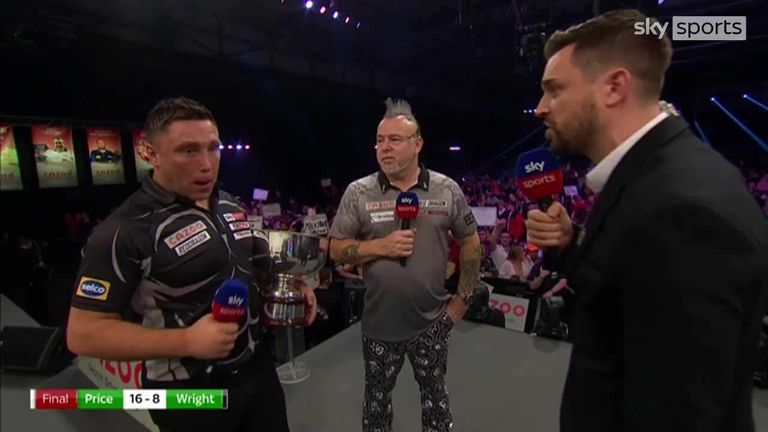 Price swept aside James Wade in Sunday's opening semi-final, fending off a late rally from 'The Machine' to close out an emphatic 16-9 success with a 102.58 average, nine 180s and 64 per cent on his doubles.

Price was equally dominant against his old adversary 'Snakebite', who recovered from a sluggish start to reduce the arrears to 4-3.

However, a sequence of six straight legs from the world No 1 set him on the path to victory, which he wrapped up with a 103.9 average and eight maximums.

"He summed it up perfectly when he said he's been clinical today, and that is why he is holding the Eric Bristow Trophy yet again," Mardle told Sky Sports.

Congrats @Gezzyprice mate! You got better as the event went on! Relentlessly brilliant!

Join Colin Lloyd, Michael Bridge and a host of guests for all the news, views and talking points from the world of darts

"I actually felt that in 2018 with him. I'm thinking: 'You're good, you're really good', but this is something special.

"How could you be so wrong? He's gone on and won this another two times, he's obviously a world champion now and world No 1, and he is enjoying that battle.

"Maybe in the next couple of years Michael [van Gerwen] will be back up there or someone else, but he is still a young man!

"He's not even in his 40s. There is still a lot of darts to be played in his career."

The 36-year-old has enjoyed a meteoric rise since first claiming his PDC Tour Card in 2014, and despite his growing haul of titles, the best may still be yet to come.

Price's sixth individual major triumph also ensures he will begin his world title defence at Alexandra Palace as the world No 1.

It's testament to Price's quality and mentality that he can suddenly ignite at a crucial juncture of a tournament, and having averaged in excess of three figures for the duration of Finals Day, Mardle hailed the Welshman's consistency.

"When you do that, your opponents will succumb eventually. It is very hard to do business against that, especially when he looks like he's got so much energy as well.

"It is another special moment for him, and he is on top of the world of darts."

Both Price and Wright have featured in three Grand Slam finals, though while the Welshman was celebrating his hat-trick, 'Snakebite' was left to rue a third successive defeat, having also succumbed in 2017 and 2019 finals. 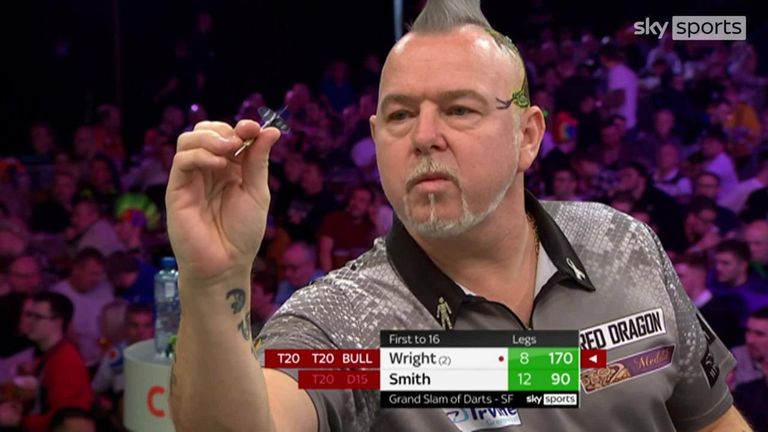 Wright also edged out a magnificent Fallon Sherrock in an absorbing quarter-final tussle on Saturday night, but simply ran out of steam against 'The Iceman'. However, Mardle backed the World Matchplay champion to bounce back with Ally Pally looming.

"Peter understands the game. You find these champions are good losers, because they understand that winning is so difficult, but when they win, they get the euphoria of that.

"They understand what it's all about. When they lose, it's a case of: 'I'll be nice today, but I'll be on the practice board tomorrow to make sure this doesn't happen again'."

It's not long to wait until the darts returns to your screens and it's the World Darts Championship at Alexandra Palace - join us on Sky Sports for every arrow from every session across 16 days, which gets underway on Wednesday December 15.