"He can just relax, go up there and throw darts. I actually think now he is going to be more dangerous"

The 49-year-old Scot walked away with the biggest prize in the game by shocking Michael van Gerwen 7-3 at Alexandra Palace on New Year's Day.

And Wright, who had lost to the Dutchman in major finals on nine previous occasions before breaking his duck, has now become a real threat to become No 1.

Lloyd believes 'Snakebite' can now relax after winning the Worlds and "throw darts" which he says make him more dangerous. 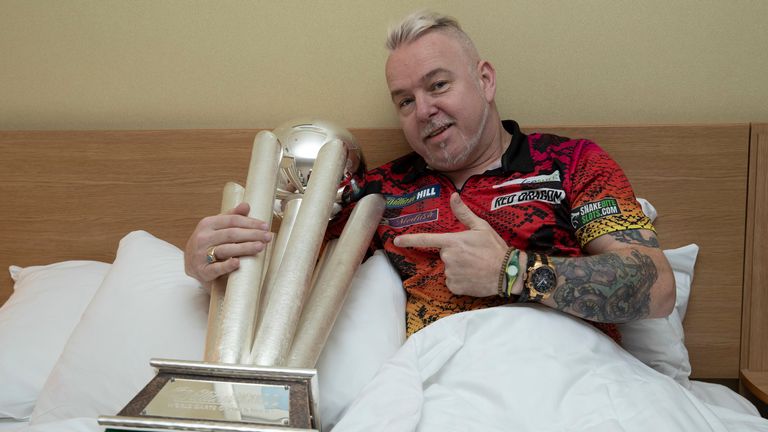 He doesn't have to put the pressure on himself anymore.

"I sat there spotting and all of a sudden I see him throw his three practice darts and I thought to myself 'oh, my god' and at the end of the game I thought 'oh, my god'. He just absolutely hit everything and smashed four and five hundred-plus outs, was rattling in 180s for fun," said former World Matchplay and World Grand Prix winner, Lloyd.

"What people seem to forget is, yes he's lost in finals to MVG, but people forget that he is a major champion having won the UK Open. And now he's won the biggest of all.

"People who say that MVG didn't turn up for the final, of course he turned up for the final. He wasn't hitting his doubles because of the pressure Peter was putting on him.

"Peter has been saying for years 'I will be world champion' and now he is. He doesn't have to put the pressure on himself anymore. He can just relax, go up there and throw darts. I actually think now he is going to be more dangerous.

"Every time he had a shot at a finish you're thinking 'he could absolutely nail this'. He looked good and he looked comfortable. From the quarter-finals onwards his focus was there."

Don't forget to catch up with all the latest darts news, our fortnightly offering on all the news from the PDC circuit and beyond.

Former world no 1 and two-time major champion Colin Lloyd is on hand to offer his expert opinion while there are a host of player interviews, in-depth feature chats, and a look at those from outside the darting world who can't get enough of the arrows.