Lewis Hamilton has defended Sebastian Vettel following his costly error at the Bahrain GP, backing the "great athlete" to bounce back in F1 2019.

The German made similar mistakes last year, spinning out in Italy, Japan, and Austin.

But when that streak was put to Hamilton, the world champion leapt to the defence of his title rival.

"There are too few of them to really look too much into it," he insisted.

Hamilton added: "It happens to all of us. Just because you're a multiple world champion it doesn't mean you're not going to have off-weekends. "It's more accumulative. You look at Vettel's career and he's had stunning performances that far outweigh the weaker races, and when he's spun, for example, they are miniscule on the status that he's accumulated and created.

"He's a world champion and a great athlete, he will recover."

Hamilton said the "really windy" conditions made it difficult for Vettel, while also backing the four-time world champion over his heavy deficit to new Ferrari team-mate Charles Leclerc, who dominated the Bahrain race before engine issues handed Hamilton the win.

"There are always times when you happen to just not get the right car set-up," Hamilton said.

"You guys don't get to see all the little things that we're doing and it just doesn't happen to work that weekend and the differences are so small, yet they look so big." 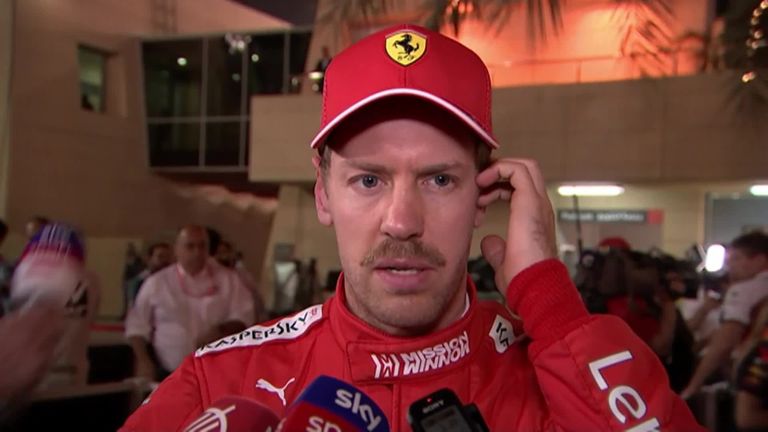 Vettel: Spin not due to pressure
After a multitude of similar errors last year, is Vettel guilty of cracking under the intense F1 pressure?

But that's not the case, according to Vettel.

"I don't think it has anything to do with pressure," he claimed.

"When I was fighting with Lewis the target was to stay ahead, that was the ambition, and I got a surprise when I lost rear that sudden, and once I was in the spin it was already too late."

Vettel continued: "I've had a look at it again, and certainly it was my mistake, so I need to digest that."