"If they start pumping on all cylinders and start delivering then we will have more of a fight," says Hamilton of faltering Ferrari

Lewis Hamilton believes Mercedes have made the difference compared to Ferrari at the start of F1 2019 by "pumping on all cylinders" with their team.

Despite enjoying far larger performance advantages back at the start of their era of world title domination, Mercedes have made the best-ever start to a Formula 1 season with four consecutive one-two finishes.

Why Senna's legacy lives on

Sky F1's Damon Hill, Mark Hughes and Johnny Herbert on what made the Brazilian great so special

Ferrari, meanwhile, have found their execution of race weekends consistently questioned and already trail Mercedes and their drivers by large early-season margins in the Drivers and Constructors' Championships.

"Both Valtteri and I are delivering the laps, the team are pumping on all cylinders, they're not.

"If they start pumping on all cylinders and start delivering then we will have more of a fight." Speaking to reporters after finishing second to Valtteri Bottas, Hamilton continued: "Ultimately, I think collectively as a team we are really operating in the high end of the 90s, percentile.

"I think those couple of percentage differences between us a team and Ferrari, who do have, and did have a very good car this weekend, I think they struggled a little bit more in the race. But qualifying pace and form all weekend was very strong."

Hamilton: No one rival yet
Against expectations, Bottas and Hamilton have broken away at the top of the drivers' standings after the opening flyaway rounds. Bottas leads Hamilton by a single point, but Ferrari's Sebastian Vettel - Hamilton's chief rival of the past two seasons - is already 35 points off the pace.

However, Hamilton insisted: "It's far too early to say that only one person is a title rival. 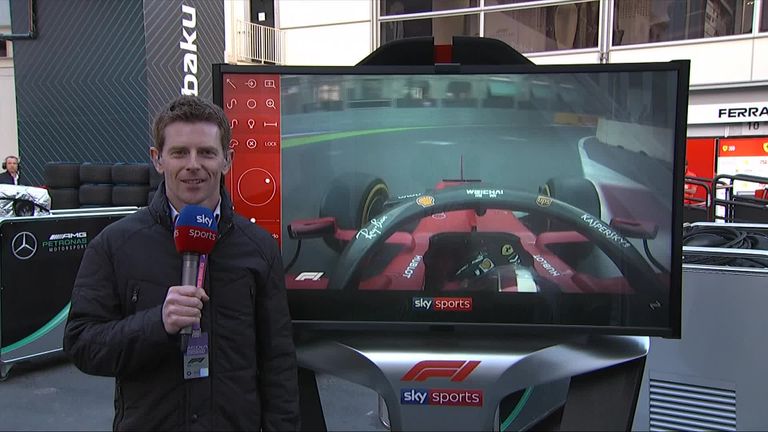 Ferrari behind, but not beaten
The Scuderia, favourites for the early races after an impressive pre-season, accept they are yet to consistently get the best out of their 2019 car, but do not believe the picture is as bleak as it has been painted in some quarters.

"Obviously four races into the season, no win for Ferrari, four wins for Mercedes, no doubt they are very strong and, certainly they have got a slightly better car," said Ferrari chief Mattia Binotto. "But the gap is not so big and the points and the gap are not reflecting the true potential of the cars.

"We had the potential of the pole [in Baku] and if you got a car fast enough to potentially score the pole, you've got a good car overall.

"In the race we were not as fast as them, but we did not finish 20 seconds behind. If you look at the lap time average in the races it's significant but still little and it's something on which to work and close in the near future."