Kvyat gives Toro Rosso a first podium since Monza in 2008 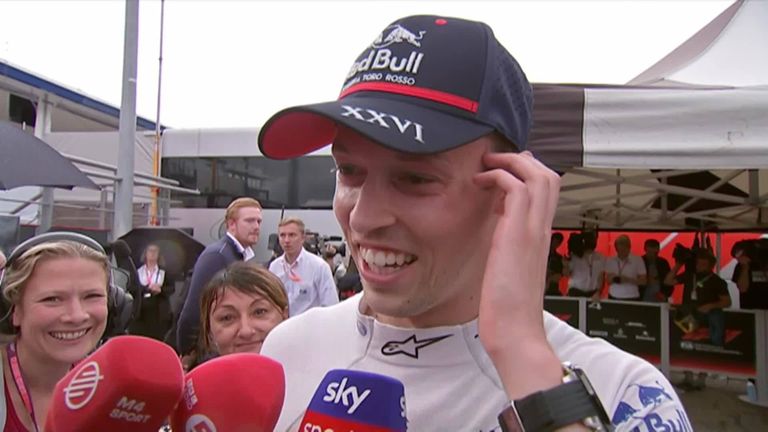 Daniil Kvyat marked life as a first-time father in style as he claimed a podium place at a chaotic and rain-soaked German GP he described as "a horror movie mixed with black comedy".

Max Verstappen held his nerve on a treacherous track to clinch his second victory this season and seventh of his Red Bull career, topping a surprise podium ahead of Ferrari's Sebastian Vettel, who started from last, and Kvyat.

The Toro Rosso driver moved back to Toro Rosso from Red Bull in 2016 to make way for Verstappen, and he was subsequently dropped after struggling to make an impact at the end of the following season.

After a year as a Ferrari test and simulator driver, he has now marked his Toro Rosso return with only the third podium place of his career.

"It's amazing to be back on the podium," he told Sky F1's Martin Brundle. "After so many years with Toro Rosso, it's great to bring a podium to the team.

"The race was crazy and finally I managed to put everything together to get this podium - I'm really happy. The race was a horror movie mixed with black comedy. I thought the race was done for me but it came alive again.

"It was a rollercoaster, a bit like my whole career."

Kvyat had been racing outside of the points for large periods of the afternoon, but the wet conditions on the track contributed to several twists during an enthralling Hockenheim race.

The 25-year-old moved up briefly to second when he passed Lance Stroll, who had also gambled on the slick tyres, but after being overtaken by Vettel, Kvyat held on to give Toro Rosso a first podium place since the Italian GP in 2008 and just their second overall in 13 years.

Kvyat: I will have half a beer only
The third-place finish caps a memorable weekend for the Russian after his partner Kelly Piquet gave birth to their first child, a baby girl.

Kvyat told Sky F1: "I had a race to do so I couldn't say beforehand, but now you can know! I don't know what we're going to call her yet, but we'll decide together.

"I'm bursting to get home. We're on the flight home tonight with Max so I hope we'll behave. Half a beer only!

"It was an amazing race today. It feels a bit surreal at the moment, I need a bit of time, but the achievement is great.

"It's been 11 years since the last Toro Rosso podium from Sebastian in Monza so it's an amazing day. I'm so happy."

Kvyat admitted that this weekend eclipses any other in his life so far, adding: "It doesn't feel like any other podium to be honest. It feels like something else, and I know it's historic after such a long time, but I was more ready now than ever to fight for this kind of position.

"This year I am more mature and my head is cooler. I'm more prepared to fight at the top, and today I proved it to myself and to everyone around and I hope soon this will become a habit."

When pressed on whether he will then gain a seat further up the grid, he said: "The Championship is long, and I just hope that next year I get more chances like this every weekend."