Why F1 is set to see more of the black and white warning flag rather than immediate penalties; Watch the Singapore GP live on Sky Sports F1 this weekend

The pulsating duel for victory between Charles Leclerc and Lewis Hamilton at the last race in Monza featured the first high-profile re-use of what has been termed Formula 1's equivalent of football's yellow card.

So what does the black-and-white warning flag mean and will it be used more regularly in F1 from now on?

What is the black and white flag?

One of the many flags available to race officials throughout the single-seater motorsport ladder, the black and white diagonal flag essentially acts as a one-time warning to drivers. It has been likened by FIA race director Michael Masi football's yellow card - essentially a final warning before a more lasting punishment is applied.

'This flag should be shown once only and is a warning to the driver concerned that he has been reported for unsportsmanlike behaviour,' state the FIA's regulations.

Should drivers repeat the offence, then the incident will be escalated to the stewards, who may issue an in-race time penalty.

When and why has it been used so far?

Although the flag has always been available in Formula 1, the recent Belgian GP was the first time it had been used in a Grand Prix since 2010.

Toro Rosso's Pierre Gasly was given the warning at Spa for moving under braking in battle with Kevin Magnussen. It was issued again a week later in front-running circumstances at Monza in the fight for victory after Leclerc squeezed Hamilton's Mercedes wide under braking for the second chicane.

Explaining the flag's return to prominence in his post-race appearance at the SkyPad in Sky F1's coverage at Monza, FIA race director Michael Masi said the change had come at the "request" from teams and drivers.

"Under the 'let them race' philosophy that the teams, the F1 Group, the drivers and the FIA have worked together on throughout the year, and giving the teams the advice at the last event in Spa, we will be using the black and white flag more often," said Masi. 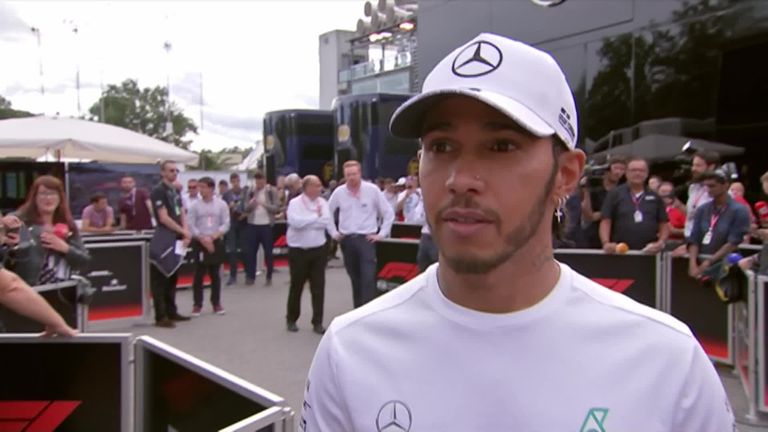 That's certainly the intention. Amid a wide desire for drivers to be encouraged to race wheel to wheel without the fear of officialdom and race-changing penalties, Masi has indicated that the black-and-white flag will become commonplace

"For small infringements that are, let's call it, a 'professional foul' but don't go beyond the line, we'll be absolutely using the black-and-white flag more and more," confirmed F1's race director.

"It's a sign to everyone that the driver's on notice because you only get one for the race. If you do it again, the drivers have all been advised that any other infraction will be referred to the stewards."

What are people saying about it?

Charles Leclerc: "I think since Austria it's clear that we can go a bit further in the way that we defend and overtake... I believe that Austria helped me to change this approach. It was obviously very on-the-limit but… yeah, I'm happy to race like this."

Sky F1's Martin Brundle: "It was tough to call [at Monza], and I'm very supportive of this 'let them race' philosophy so long as it's consistent and the drivers don't take liberties and spoil it all."

Sky F1's Karun Chandhok: "I really like the idea of the black-and-white warning flag from Michael Masi and it was a good decision not to break up the fight but just warn Charles that he wouldn't get away with such a robust defence on a regular basis."

Mercedes' Toto Wolff: "I think there will be more cars touching, it will be common practice. My opinion is that it's going to get to the point where there is a collision and we are going to bail out. Until then, we let them race."