It is understood the government will continue to explore possible solutions for elite sport, as 14-day quarantine period for UK arrivals confirmed Silverstone boss Stuart Pringle says he "remains optimistic" that the British GP will be able to take place this summer.

Home Secretary Priti Patel on Friday confirmed government plans for a 14-day quarantine for travellers arriving in the UK from June 8.

Sportspeople were not included in the initial list of those who would not need to quarantine, which was published by the government on Friday night.

Sky Sports understands that the government will continue to explore special solutions for elite sports, including Formula 1.

An F1 spokesperson said: "We have been working closely with government on the implications of the policy for Formula 1 and Silverstone and those discussions are ongoing at this time with the aim of finding a solution with safety as our first priority."

Under strict and extensive 'biosphere' conditions with the testing of personnel for COVID-19 every two days and using charter aircraft, F1 has been working on a plan to start the season with two races in Austria at the start of July before heading to Silverstone at the end of that month for two more events at the Northamptonshire track.

Pringle, Silverstone's managing director, is confident F1 can prove its personnel can enter the UK safely without the need for quarantine.

In an interview on Friday with Sky Sports, Pringle said: "It's a very complex sport to get going because it's a global championship with a huge logistical tail. So Formula 1 does need to know that it can set off on its global travel and be able to come in and out of its home base.

"I am very clear that the importance of the industry is understood by government. I remain very optimistic that they will find a way. I'm very, very conscious that it's extremely complicated drafting these things and working up against ever-moving deadlines - it's not a task I'd wish to undertake. 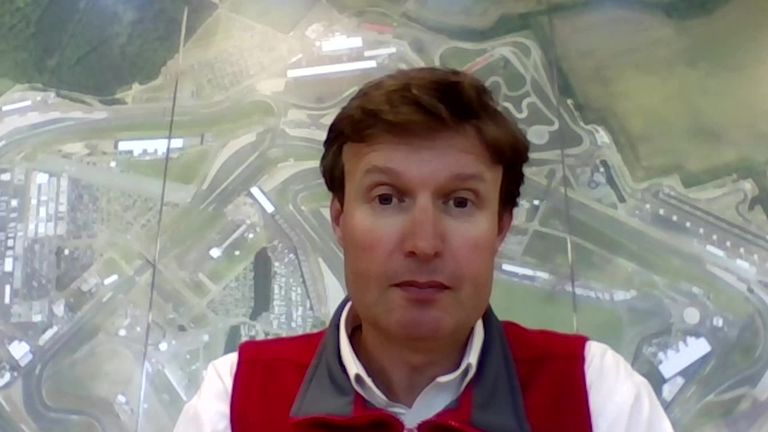 "So I remain optimistic that a sensible and pragmatic solution, which puts the onus on the sport quite rightly to come up with the right solution, can be found."

It is understood that the planned Silverstone double header has been pencilled in for July 26 and August 2.

Asked how long they could wait before receiving a definitive green light, Pringle replied: "I'm not clear on dates, at the moment. It really is dependent on whether the championship can get started. We have a good deal of flexibility here at Silverstone so we can accommodate later dates in August if required, possibly even into September conceptually.

"But it's not so much about what we can accommodate, or how long it will take us to stand up - and the answer to that is pretty quick because we've got all the infrastructure here - but it's can the championship piece together a calendar that allows them to go from country to country?

"Can they comply with the regulations in those countries in place at the time? And can they have the confidence to commit to that in a timescale that allows the freighting plan to come together because it's the logistics that are the key to getting this championship underway."

The Silverstone chief added that he was "100 per cent confident" that F1's health and safety procedures would be deemed sufficient to run the event, adding: "They have already got a highly-developed set of procedures in place."

Pringle: More than just about a race

Although it is already confirmed that the planned events would run without fans in attendance, Pringle said the significance of the British GP was about more than just sport competition.

"This isn't just 90 minutes of an exciting sporting race. This is about getting an industry back to work," said Pringle, with seven of F1's 10 teams and numerous suppliers based in the UK.

"This is about 40-plus thousand's people's livelihoods being ignited.

"The racing is at the very top of the pinnacle. Formula 1 is absolutely the top of the motorsport tree, it's the bit that we see and it's the most visible bit. But it is the stand-bearer for this industry and it's about getting an industry started again.

"Our industry has stopped - stopped full stop - and we need to get it back going again. There are a lot of people's livelihoods associated with this. It's not so much about a race, it's much more about getting back to business."