Ferrari junior wins from seventh on grid in Italy for first victory of 2020 and first in an F2 feature race; Schumacher now just behind fellow academy drivers Shwartzman & Ilott in title chase

Mick Schumacher provided struggling Ferrari with what they described as a "ray of sunshine" amid an otherwise difficult home GP for the Italian team with his first victory of the F2 season.

Schumacher, a member of Ferrari's driver academy, won his first round in the series last year in a reverse-grid sprint race in Hungary, but Saturday's success at Monza came in the longer and more significant feature race.

Stretching his run of consecutive podiums to four, Schumacher is now in the thick of the F2 title fight and within three points of two fellow Ferrari juniors - Robert Shwartzman and Callum Ilott, who are tied at the top of the standings.

On a day Ferrari's F1 team failed to get a car into the top 10 of the grid at their home Monza event for the first time since 1984, the Scuderia's sporting director, Laurent Mekies, said: "On a difficult day like this, there was one ray of sunshine thanks to the guys in the Ferrari Driver Academy who are racing in Formula 2, with Mick Schumacher taking his first win of the season.

"It's great to see that, at the moment, the top three in the series, leader Robert Shwartzman, Callum Ilott and Mick himself, are all products of our Academy."

Schumacher's success was all the more noteworthy as Schumacher had started seventh following a spin in qualifying.

But a storming start took the 21-year-old, the son of seven-time F1 champion Michael, into second place by the first chicane and he then profited when early race leader Callum Ilott, a fellow Ferrari junior, stalled at his pit stop. 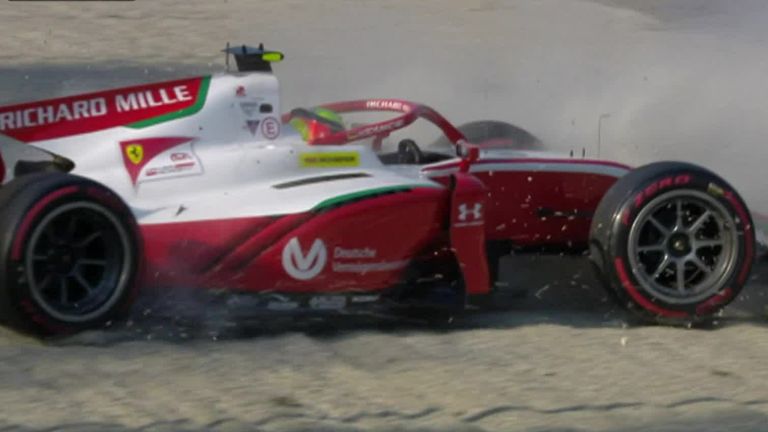 He controlled the race from there to beat Luca Ghiotto by three seconds and, with Ilott only finishing sixth and championship leader Robert Shwartzman ninth, Schumacher is only three points off the title lead heading into Sunday morning's sprint race.

The Monza F2 sprint race, which Louis Deletraz will start on reverse-grid pole for, starts at 10am live on Sky Sports F1. Schumacher starts eighth, alongside Shwartzman.