Lewis Hamilton may have a Sunday penalty, but there was no stopping him in qualifying for Saturday's 24-lap sprint; the Sao Paulo weekend continues on Saturday on Sky Sports F1, with Practice Two at 3pm followed by the third and final Sprint of the season at 7.30pm

Lewis Hamilton delivered a scintillating and dominant performance in Sao Paulo GP qualifying to ensure he will start one place ahead of title rival Max Verstappen on the grid for Saturday's sprint race in Brazil.

Although Hamilton will take a five-place grid penalty for Sunday's Grand Prix owing to the use of another fresh Mercedes engine, his starting place for Saturday's event - the 24-lap sprint race where a maximum of three points are on offer for the winner - is unaffected.

That is as it stands, as Hamilton's car is currently being investigated by stewards on Friday night over a potential technical infringement related to the DRS rear wing.

Hamilton topped all three qualifying segments by an unexpectedly comfortable margin on Friday evening, his Mercedes W12 in the groove around the undulating Interlagos circuit after just one session of practice.

Hamilton's superior speed also bodes well for Sunday's race, where he will start no higher than sixth even if he wins the sprint.

"Let's go!" shouted Hamilton after being told of the qualifying result over Mercedes radio. His fastest time of 1:07.934 was four tenths quicker than Verstappen could manage. 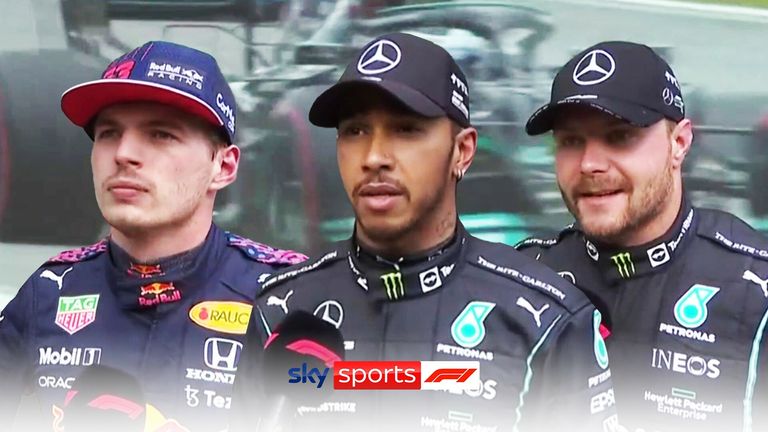 But while Red Bull had no answer to that speed, just five days after an utterly-dominant showing on race day in Mexico, Verstappen was able to at least split Hamilton and Valtteri Bottas with second place to secure yet another front-row starting position this season alongside his great rival.

In an intriguing sub-plot to consider, Verstappen knows that even if he finishes second to Hamilton again on Saturday, which would mean he loses a point of his current title advantage, he would inherit official pole position for Sunday's main event.

Verstappen leads the championship by 19 points from Hamilton.

Sergio Perez was fourth in the second Red Bull, pipped by Mercedes counterpart Bottas by 0.014s.

For the second successive weekend, Pierre Gasly delivered fantastically to take fifth for AlphaTauri ahead of the two Ferraris, where Carlos Sainz outqualified Charles Leclerc.

McLaren, overtaken by Ferrari in the battle for third in the constructors' championship in Mexico last Sunday, will line up directly behind with Lando Norris in eighth and Daniel Ricciardo ninth.

There was a result of note towards the back of the field as, for the first time in his three-season F1 career, George Russell was outqualified by his Williams team-mate - at the 56th time of asking.

Both of the Grove team's cars were knocked out in Q1 but it was Nicholas Latifi who was the quicker of the two, finishing his final lap half a tenth up on his British stable-mate in 17th place.

Russell can still quickly ensure he starts ahead for Sunday's race in Saturday's short-form Sprint, which is at 7.30pm live on Sky Sports F1, with build-up from 6.30pm.

Friday's track action in Brazil began with news of Mercedes' latest need for an engine change, this time on Hamilton's car for the second time in four races.

Armed with that fresh unit, Hamilton topped that sole practice session by 0.3 seconds - and his advantage over Verstappen was then at least 0.4s all the way through qualifying.

"A big, big thank you to all the team because they've been working flat out. It's been so hard coming from the last race for everyone," said Hamilton.

"Today was a really good qualifying session. I'm really happy with it. We've got the penalty to come but we give it everything we've got."

Conclusively beaten on this occasion, but Verstappen was sanguine about the gap.

"When they take a new engine, naturally they have a bit more power for the weekend," said the Dutchman.

"For me it's not a big shock. I'm just happy to be second. It's a good position to start from."