Grid penalty could be coming Lewis Hamilton's way after car is referred to stewards for possible DRS infringement during a qualifying session he topped; Decision to be made on Saturday; But Verstappen also summoned over potential parc ferme breach

Lewis Hamilton's Mercedes car has been referred to stewards at the Sao Paulo GP due to an alleged DRS infringement during qualifying while, in a huge development, Max Verstappen has also been summoned in Brazil.

Hamilton, who is already set to serve a five-place grid penalty for Sunday's race, topped qualifying for the F1 Sprint ahead of championship leader Verstappen - but both are now subject of an investigation.

Hamilton's hearing has been adjourned to Saturday in Brazil while stewards "await further evidence that will not be available until the morning".

Shortly after that communication was sent out by the FIA late on Friday night, Verstappen was called in a separate summons to appear before the stewards on Saturday at 12.30pm GMT for a possible breach of parc ferme rules after qualifying. 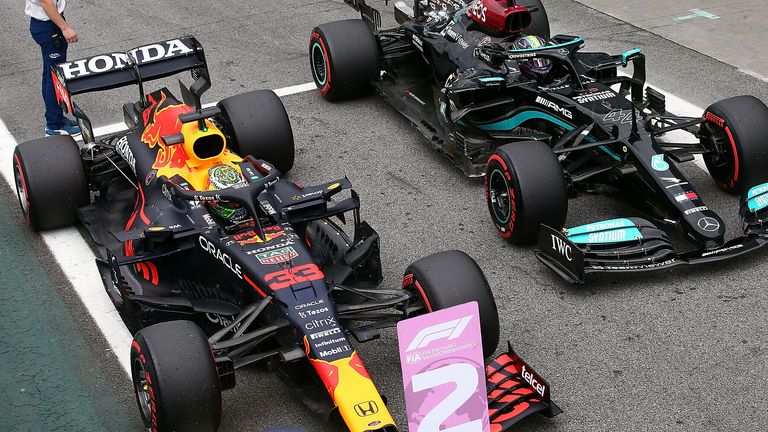 Why is Hamilton's car being investigated?

F1's technical delegate said Hamilton's Mercedes car did not fulfil the "maximum distance" required for DRS, the Drag Reduction System which with its movable flaps on the rear wing increases speed on the straights.

"The uppermost rear wing element adjustable positions were checked on car number 44 for compliance with Article 3.6.3 of the 2021 Formula One technical regulations," read a statement on Friday after qualifying..

"I am referring this matter to the stewards for their consideration."

The DRS is comprised of an upper and a lower flap, and it appears the gap between those was bigger than rules allow when deployed.

Sky F1's David Croft posted on social media that a grid penalty could be coming Hamilton's way - although only for Saturday's 24-lap Sprint and not for Sunday's race, which Hamilton already has a penalty for due to a new Mercedes Internal Combustion Engine.

Why is Verstappen now seeing the stewards?

Stewards want to speak to the Red Bull driver about an alleged breach of Article 2.5.1 of the International Sporting Code.

"Inside the Parc Fermé, only the officials assigned may enter," reads the regulation. "No operation, checking, tuning or repair is allowed unless authorised by the same officials or by the applicable regulations."

Fan video footage uploaded to social media after qualifying of parc ferme appeared to show Verstappen going over to Hamilton's Mercedes to touch its rear wing, after doing the same with his own Red Bull.

A remarkable twist in Hamilton vs Verstappen: What will happen next?

"A whole series of cars were checked yesterday, including Hamilton's Mercedes team-mate Valtteri Bottas' - but only Hamilton's was found to be non-compliant.

"Significantly, the FIA have since impounded the rear wing of Hamilton's car. Does that suggest that they weren't satisfied with the original measurements, or they want to check it again? That might work in Hamilton's favour.

"Now, Mercedes might allege that Max Verstappen is a party in all of this.

"He goes over to Hamilton's car, and actually touches the rear wing. You're not meant to do that, because the cars are in parc ferme conditions - they're not to meant to be touched after this session.

"That would leave him in breach of the sporting regulations, which maybe isn't so serious in terms of what happens to him. Maybe he'll get a slap on the wrist, a reprimand for doing that.

"But could Mercedes allege that their rear wing has been tampered with? And could that be a factor in the case against Hamilton's car? In a sense, could they say the forensics have been tarnished in some kind of way. They may want to use it as evidence in Hamilton's case.

"But ultimately, the bigger picture is... could this end Hamilton's title hopes for this year?"

What had happened in Qualifying?

Hamilton was dominant in Friday's qualifying session, beating Verstappen, who he trails by 19 points in the title race, by almost half a second.

"I loved today, for sure," said a beaming Hamilton at Interlagos. "We're working so hard to try and get this car right.

"I was sitting in [practice] for the whole hour trying to make the right set-up change, the anxiety you get is crazy. A lot of the time I get it wrong, but today I got it right. The car was really nice to drive.

"I don't know how we can go from one track and them [Red Bull] being half a second ahead to them being behind. But they'll be very strong in the race. I hope Valtteri (Bottas) gets a good start."

The F1 Sprint is live on Sky Sports F1 at 7.30pm on Saturday, with Sunday's Sao Paulo GP live at 5pm.