Max Verstappen's championship lead is down to just eight points with two races left after Lewis Hamilton dominates at the front; Verstappen made light of late grid penalty but could not catch his Mercedes rival; Alpine's Fernando Alonso back on the F1 podium after seven years away

Lewis Hamilton claimed a runaway and crucial win in the Qatar GP to strengthen his hopes of winning a record eighth world title, as Max Verstappen recovered from his grid penalty back into second and Fernando Alonso brilliantly took his first F1 podium for seven years.

Hamilton's second victory in as many weeks was never in doubt from the moment he converted his dominant pole into the race lead on F1's first start at the Losail circuit.

He moves to within eight points of Verstappen with just two races of this amazing season to go.

The lead up to the race was dominated by the wait to learn whether F1's title leader would receive a grid drop for a yellow-flags infringement in qualifying. A penalty of five places was duly applied by stewards less than two hours before lights out, but the Dutchman had recovered his grid position of second place within five laps of the race start.

But that was where Verstappen's early charge ended as he could make no impression on the serene Hamilton thereafter, with his main focus instead on ensuring he took the fastest lap bonus point and not his British rival, which he achieved. 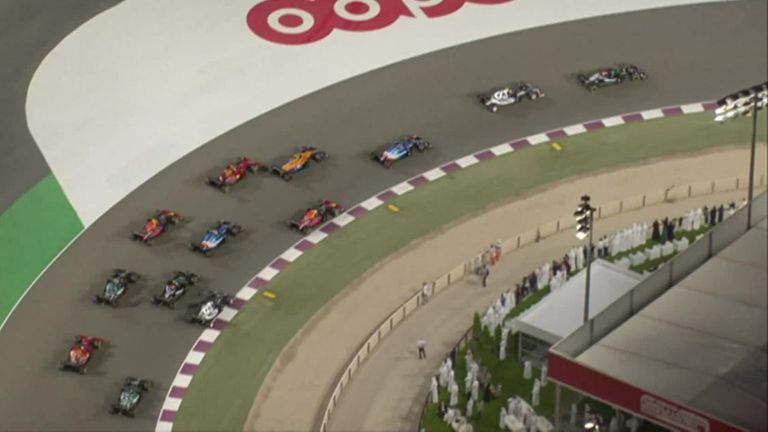 From a lead of 21 points just eight days ago, Verstappen's advantage of eight points with 52 left to play for in Saudi Arabia (December 5) and Abu Dhabi (December 12) now looks precarious on the evidence of Hamilton and Mercedes' pace at the last two events.

Tantalisingly, Verstappen and Hamilton would go into an Abu Dhabi decider level on points if the latter won with the fastest lap in two weeks' time on F1's debut at Saudi Arabia's new Jeddah street track.

While the battle at the front was settled early here, there was excitement behind in the battle for the final podium position involving the second cars of Mercedes and Red Bull - plus interloper Alonso in the Alpine.

Valtteri Bottas, who received a three-place penalty for not slowing for yellows at the end of Q3, endured a torrid start to the race from sixth but had raced back into third before his Mercedes' front-tyre suddenly punctured.

He eventually retired with car damage, a costly blow to Mercedes in the constructors' fight with Red Bull. 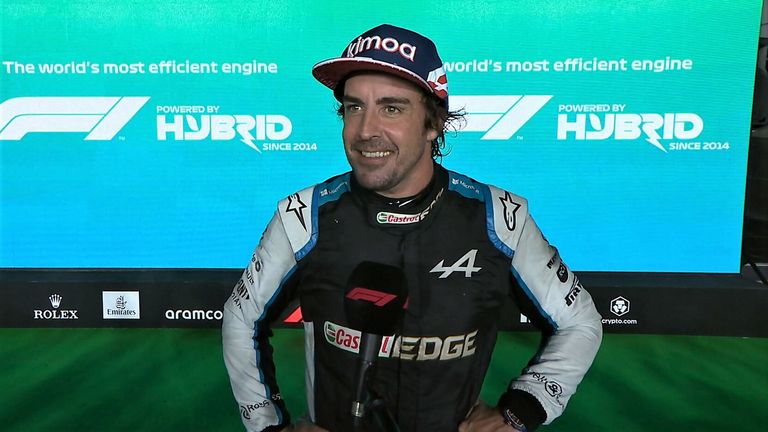 Sergio Perez was then in the hunt in the second Red Bull but, adopting a two-stop strategy, he ran out of time to catch Alonso, whose brilliant weekend was capped by a stunning one-stopper while others faltered and suffered punctures on worn rubber.

Alonso had originally qualified fifth but inherited third due to Verstappen and Bottas' penalties. He then overtook Pierre Gasly on the opening lap to initially run second to Hamilton.

It is the 40-year-old two-time champion's 98th podium in the sport but his first since 2014 when at Ferrari.

Third for Alonso and fifth for team-mate Esteban Ocon on a big Sunday for Alpine on a day constructors' rivals AlphaTauri scored no points.

Hamilton leads from the front to close in on Max

Playing catch up in the championship into the late weeks of the season, Hamilton could not have asked for a more straightforward victory than the one he enjoyed on Sunday under the floodlights in the evening of the desert.

While his championship rival was meeting the stewards in the hours ahead of the race, Hamilton always knew he would be starting from the head of the grid - and he certainly did not waste the opportunity.

With Verstappen relegated to row four, Hamilton held off front-row debutant Gasly on the run into the first corner and quickly set about making his advantage count. "Two races to go, eight points in it. Two of the best drivers in the world in Formula 1 cars. It's extremely tight, and we don't know which car is going to be quickest at the next race."

By the time his Red Bull rival was into second place four laps later, Hamilton's lead was just over four seconds. It never got smaller than that.

"It was pretty straightforward, it was pretty lonely at the front," admitted Hamilton afterwards as he reflected on his seventh win of 2021 and 102nd in F1.

"Of course, I enjoy those races where you're battling through but we needed those points today, so I think a real solid job from the team. I can't wait watch the replay of the race to see what happened behind me.

Hamilton added: "I'm really grateful for the points, it's been a hell of a year. To be at this point in the season and have back-to-back wins is a great, great feeling and puts in good stead for the next two."