Alice Powell backs up first pole position of the season with first race win of the season; Jamie Chadwick climbs from fifth to second to move closer to W Series title; Beitske Visser third at the Hungaroring After claiming her first pole position of the season on Friday, Powell backed up that performance by maintaining her composure on a drying track to hold off an early assault from Beitske Visser, before denying Chadwick in the closing stages.

"Great to be back on the top step," Powell said.

"It's taken a lot longer this season that I would have liked, but to get Bristol Street Motors their first win in the championship, in their year in the series, is amazing."

Chadwick had won all five W Series races this season, along with the final three of last season as she overcame Powell in a duel for the title, but was left with a lot of work to do on Saturday in Budapest after qualifying fifth.

Her task was made more challenging by the first five minutes of the race being spent behind the safety car as the track dried out, but the Jenner Racing driver made swift progress to move up third in the opening stages.

Powell held off Visser on the opening laps, before the Sirin Racing driver came under pressure from Chadwick.

Having earlier gone round the outside of Marta Garcia into Turn 1, Chadwick took the inside option to pass Visser for second.

The drying track contributed to plenty of drama further down the field throughout the race, with Quantfury team-mates Belen Garcia and Nerea Marti colliding early in the race.

Powell's team-mate Jess Hawkins had her race ruined as Emma Kimilainen made contact while attempting to overtake into Turn 1, leaving the Brit to drop down the field.

A puncture for Bianca Bustamante saw the Safety Car emerge and bunch the field up before the thrilling five-minute finale.

Chadwick closed to Powell's rear wing, but then ran wide to allow her compatriot to pull further clear and secure enough of a margin to see out the closing stages. 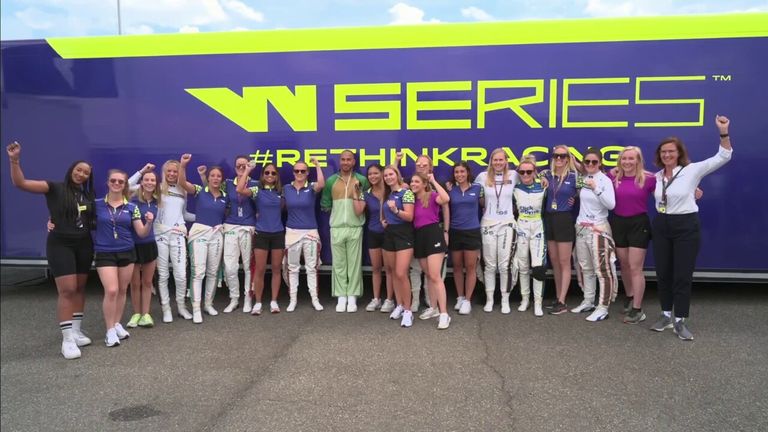 "If anyone was going to break that win streak, I feel like Alice is probably quite a deserving person," Chadwick said.

"I did what I could. With the mixed conditions, it helped. It's a really tricky track to overtake and at the end I just didn't have enough to challenge Alice."

The victory sees Chadwick extend her championship lead to 75 points, with four races remaining after the summer break. That means victory in Singapore at the end of September will guarantee the Brit another title.

Chadwick added: "(I'm) happy with second, happy with the race and I think we can go into the summer break pretty pleased."