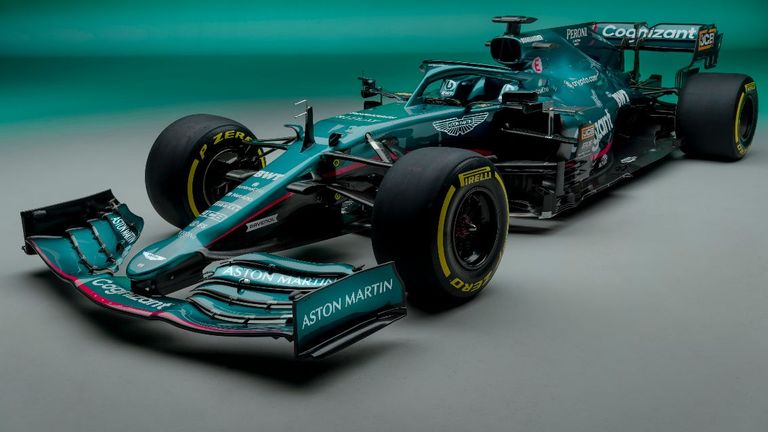 Aston Martin's return to Formula 1 after a 60-year absence was given a star-studded launch as the new-look team unveiled their 2021 car for the new season.

With Aston Martin the car brand most closely associated with James Bond, the event also included a video message from Daniel Craig wishing the team well in the new season.

Draped under a Union Flag before being revealed by Vettel and team-mate Lance Stroll, the AMR21 is based on last year's competitive Racing Point challenger which won the penultimate round of the season in Bahrain and finished fourth in the Constructors' Championship.

Now armed with the name of the iconic British sportscar brand, and investing in the team's facilities, the Silverstone outfit are aiming significantly higher than that in future seasons.

"The team is pushing forward, and our ambitions are limitless. We now have the pieces in place, the people and the partners, to make real progress."

The new car will take to the track for the first time in a shakedown at Silverstone on Thursday.

After six rollercoaster years at Ferrari which featured race wins but no fifth career championship for the German, Vettel arrives for a new chapter in his illustrious career with, arguably, a point to prove.

"I go racing to win and obviously it's a very exciting project, a new start and a new chapter for the entire team. I'm very much looking forward to it," said Vettel.

"Winning is maybe a bit ambitious straight away, but it's everybody's goal, it's why we go racing.

"As a driver, I have always kept my eye on the competition and this team has consistently impressed me with what they have been able to do without the biggest of budgets.

"So, when Lawrence and Otmar [Szafnauer, team boss] approached me last year, and explained what their ambitions were, I was immediately very motivated to join the team.

"I love the history of motor racing and Aston Martin is one of the great names of the past, so it is fun to be part of their return to Formula 1 after an absence of 61 years."

From Ferrari red to Aston Martin green, an impressed Vettel said of his new challenger: "The colour is amazing. It will be unique and already one of the best-looking cars on the grid."

What are Aston Martin's 2021 targets?

A fourth-place finish last year was the team's best result in three years but for much of the campaign, they had looked favourites for third, before being pipped by McLaren at the final round.

And with an immediate challenge to Mercedes and Red Bull unlikely this season, moving into third by the end of 2021 appears to be the target.

"We don't want to stand still," said team principal Otmar Szafnauer. "Fourth place was a good finish for us last year, but we want to move forward.

"So if we can start this season where we left off last year with a bit more consistency and scoring points I think we'll have every opportunity to do better."

With all teams' development restricted this winter on cost-saving grounds, Aston Martin's design team have used their two allocated 'tokens' to upgrade their chassis. Under the regulations, customer outfits are also allowed to change to the 2020 version of non-listed parts bought in from rivals, in this case Mercedes.

"But there are still a lot of changes under the skin. We have spent a huge amount of time and effort on the '21 car and we're very excited by what we've produced."

Vettel, a winner of 53 grands prix, added: "I see potential. I think the team has always been very successful in the past with limited resources, now the regulations in Formula 1 are changing a little bit, and with the new launch of Aston Martin coming back to F1, a lot of talented people joining and coming together to this already good group already, I think it's [his arrival is] only an addition.

"So I hope that I can contribute as well, and I think if we keep sharing that joy and passion then good things will follow."

What brings the Aston Martin name to F1?
Aston Martin is a famous car brand that screams British luxury. Think James Bond. Think royalty. Think heritage. But for all too long - since their last team graced the grid more than 60 years ago, in fact - the manufacturer and cultural icon hadn't considered Formula 1 a priority for the Aston name.

But that all changed in early 2020 when a consortium led by Stroll, the Racing Point team owner, bought a major stake in Aston Martin - sparking a major revamp and a return to F1.

"It is, I think, the biggest thing that's happened to Formula 1 in decades," said Stroll recently.

So, Aston Martin have raced in F1 before?
Yes, but only for two seasons in 1959 and 1960 and they only actually entered five races before leaving the sport. You probably will have noticed their logo on F1 cars in recent seasons as they have been Red Bull's title sponsor for the last three season years (with that partnership now ended), but Aston's motorsport exploits have largely come in endurance racing rather than F1.

Is this a completely new team?
Not exactly. While they have a new name and new look for 2021 but Aston Martin aren't starting from scratch when it comes to joining the F1 grid, instead taking over the well-established Racing Point team.

The Silverstone outfit, who have also formerly been known as Force India and Jordan GP (just to name a few), enjoyed a big improvement up to fourth last year and have retained key personnel, and their car philosophy, with the aim of battling midfield rivals McLaren, Ferrari and fellow rebranded team Alpine this year.