Wolves would like to keep Conor Coady at Molineux, but are aware of the defender's desire to be in the England squad ahead of the World Cup; Coady's minutes are likely to be reduced this season following Nathan Collins' arrival; Wolves are confident of keeping Ruben Neves 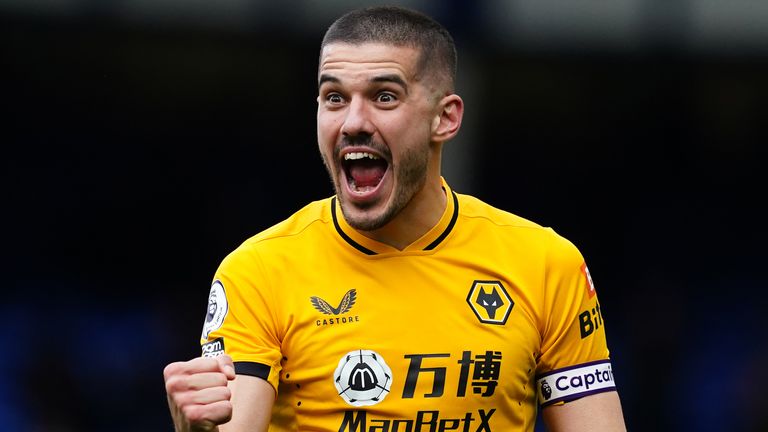 The 29-year-old, who has been at the Midlands club for seven years, is a target for Everton boss Frank Lampard as he looks to add the experienced defender to his ranks.

It's thought Wolves would want to keep the player at Molineux, but are sympathetic to the fact Coady is keen to force his way into the England squad ahead of the World Cup.

Following the arrival of Nathan Collins from Stoke in a £20.5m deal, it is anticipated that Coady's minutes would be reduced this season.

There is an expectation at Wolves that they will be able to keep prized asset Ruben Neves, despite the midfielder being lined up as a Frenkie de Jong alternative by Manchester United.

Wolves are also facing a battle to keep hold of Morgan Gibbs-White, with Nottingham Forest expected to come in with an improved third offer after seeing their initial two bids rejected - the latest of which was close to £25m.

Bruno Lage's side have no intention of selling the 22-year-old, who spent last season on loan at Sheffield United.

Gibbs-White, who has also been a target for Everton this summer, is known well by Forest boss Steve Cooper after playing under him on loan at Swansea.

Wolves are confident that Ruben Neves will stay this summer and the club would like to talk to him about a new contract.

Neves is among the potential options at Manchester United if they are unsuccessful with their pursuit of Barcelona's Frenkie de Jong, who is also a target for Chelsea.

Neves shares the same agent as Cristiano Ronaldo - Jorge Mendes, who is continuing to seek a solution for the Portugal star, who wants out of Old Trafford.

Wolves manager Bruno Lage says 'big teams' will pay up to £100 million for a player like Ruben Neves.

Neves still has two years left to run on his Wolves deal so the club are not in any rush to tie him down, but it is likely an approach will be made after the transfer window.

The relationship between player and club is good - and they would be willing to include a clause that would allow him to move on to a Champions League club.

Neves has been keen to play in Europe's elite competition and has always been attracted to the idea of playing for Barcelona - who do have him on their list of potential new recruits, especially if they lose De Jong.

As it stands, Neves is fully focused on the new season with Wolves and making sure he is in the Portugal team at the winter World Cup in Qatar. He is set to start in their Premier League opener at Leeds on Saturday.

Lille's Renato Sanches had been another player mooted as a possible alternative midfield target at United but Sky in Italy are reporting he is set to undergo a medical with Paris Saint-Germain.

Wolves, meanwhile, have made signing a striker a priority before the deadline, after Raul Jimenez suffered an injury ahead of the opening game of the season.

Adama Traore, who is also currently out with a knock, may seek a move away before the deadline too after spending the second half of last season on loan at Barcelona, but no concrete option has yet materialised for him.