Fox, 35, finished one shot ahead of Alex Noren and Callum Shinkwin. He finished the final round four-under 68, with Nornen and Shinkwin ending on three-under 69; Rory McIlroy fires six-under final round to finish two shots back 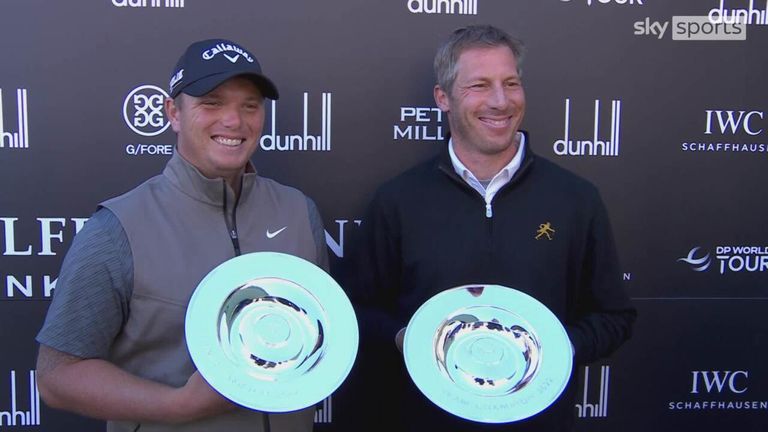 Ryan Fox won the Alfred Dunhill Links Championship at St Andrews by one shot ahead of Sweden's Alex Noren and Englishman Callum Shinkwin, while Rory McIlroy finished two shots back after a Sunday charge.

Fox started the day 11 under, chasing Richard Mansell, who had stretched his lead from two strokes to four on Saturday.

He carded seven birdies and three bogeys on Sunday to finish 15-under par overall to win.

It is his second win on the European/DP World Tour, after he finished first at the Ras Al Khaimah Classic in the United Arab Emirates in February.

The New Zealander was supported at St Andrews by his father Grant, who captained the Rugby World Cup-winning All Blacks side in 1987.

It took Fox just seven holes to take the outright lead, with birdies on the third, fifth and seventh holes.

He extended his lead to three strokes with three holes left, with a mix of good approach play and brilliance on the greens and despite a late scare on the 17th, Fox managed to limit the damage to a bogey before safely parring the 18th to win the title.

Fox, who alongside Shane Warne had finished second at this event last year in the team contest, said: "It means a lot. To be honest, the only person I can really think of at the moment is Warne.

"He meant a lot to me and this event and was a great mate. It's a terrible shame he's not here. I'm going to enjoy celebrating this one with the family."

When asked whether he felt Warne's presence out on course, Fox added: "Yeah, there was definitely some luck out there.

"Obviously, I was pretty nervy the last three holes. I didn't hit very good shots, to be honest, down the 16th, 17th and 18th. He was definitely helping out."

Despite carding one of the rounds of the day, three-time Alfred Dunhill Links runner-up Mcllroy finished in tied fourth place alongside Antoine Rozner on 13-under.

Mcllroy had the best score of the day, finishing six-under-par 66, but it wasn't enough to catch the Fox.

Shinkwin and Alex Acquavella won the team event by three shots on 37 under par.

The DP Tour moves onto Spain, for the Acciona Open de Espana, which starts on October 6, with Tommy Fleetwood and Justin Rose expected to tee it up.