Paul Casey remained in contention at the halfway stage of the Travelers Championship as unheralded Zack Sucher claimed a two-shot lead.

Casey carded six birdies and four bogeys in an inconsistent 68 at TPC River Highlands that left him four strokes off the pace, while Brooks Koepka did well to avoid a weekend off as Jordan Spieth and Phil Mickelson both made disappointing early exits.

Sucher, primarily a Web.com Tour player who has made only three starts on the main PGA Tour this season following almost 18 months out of the game due to knee and ankle injuries, emerged as a surprise 36-hole leader having missed the halfway cut in his two previous appearances in the tournament.

The 32-year-old earned the final sponsors invite despite missing the cut at the Lincoln Land Championship last week, and he is making the most of his opportunity to tee it up in a high-quality field as he followed his opening 64 with a 65 to close on 11 under.

After starting his second round at the 10th, Sucher pitched in for eagle at the 13th and then reeled off three straight birdies from the 15th to cover the back nine in just 30 strokes before bouncing back from a bogey at the fourth with another birdie at the sixth and parring home.

His clubhouse target held up throughout the remainder of the day as Chez Reavie and Keegan Bradley led the chasing pack, with both firing four-under 66s to earn a share of second place on nine-under par. 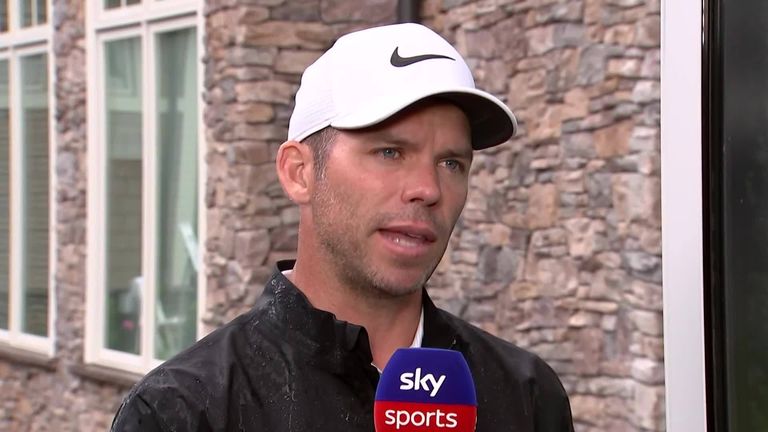 Casey, twice a runner-up at the Connecticut venue, began his second round with a bogey at the 10th before reviving his challenge with four birdies in five holes, capped by a superb tee shot to within a few inches of the cup at the short 16th.

The Valspar Championship champion then erred at the 18th for the second day running and, after holing from eight feet for birdie at the second, two wayward tee shots at the fifth and sixth led to back-to-back bogeys and dropped him back to six under.

But Casey finished on a high note when he clipped a wedge to tap-in range at the ninth, and he was delighted to stay in touch with the leader having struggled with his ball striking in the cool, damp conditions.

"Yesterday I finished with a bogey, and today I stand here after finishing with a birdie. That tastes much better," said Casey. "I did struggle through the round, especially with the ball striking; made some errors. But the putting is good.

"I'm in a good spot. Playing poorly it feels like today, not so much yesterday, and to still be in the mix, I'm pretty happy."

Casey's playing partner, Jason Day, surged into contention with an impressive 63 that featured five birdies over his opening seven holes and lifted him alongside the Englishman in a tie for sixth, while Louis Oosthuizen, former Masters champion Patrick Reed and Scotland's Martin Laird are well placed on six under.

Tommy Fleetwood is a further shot behind after returning an erratic 69 that included an eagle and three birdies but also four dropped shots, while Koepka needed a big recovery from an opening bogey to survive the cut.

The world No 1, who handed over his US Open crown to Gary Woodland at Pebble Beach on Sunday, responded to his mistake at the first with five birdies in six holes from the third and then parred the last 10 for a 66 and a halfway score of three under, which got him into the weekend with a shot to spare.

Spieth needed to play his last six holes in two under to make the cut but bogeys at five and six ended his hopes, while Mickelson crashed to three over after a torrid first eight holes as he carded three dropped shots and a pair of double-bogeys.