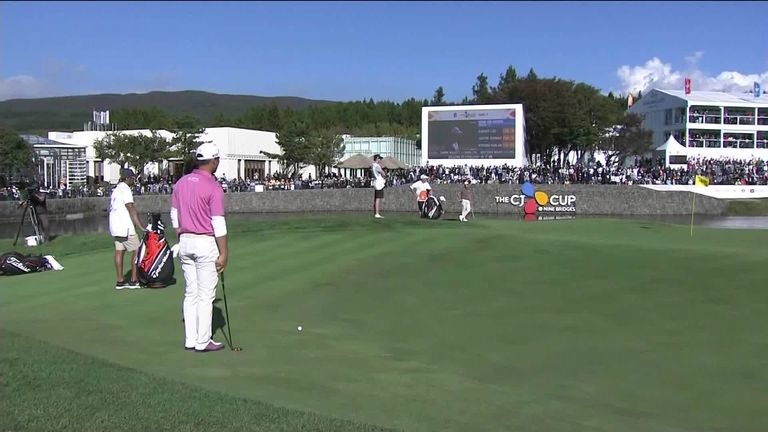 Danny Lee capitalised on a final-hole error from Justin Thomas to grab a share of the lead heading into the final round of the CJ Cup in South Korea.

A three-shot swing at the par-five 18th saw Thomas make bogey after knocking his approach into the hazard and Lee hole a long-range eagle, leaving the pair tied on 15 under at Nine Bridges.

Thomas, chasing a second win in three years at the event, mixed six birdies with four bogeys during his third-round 70, while Lee moved into a share of the advantage with a four-under 68.

Cameron Smith leads the chasing pack and is three strokes off the pace in third, with Jordan Spieth and Wyndham Clark a further shot back in tied-fourth ahead of Byeong Hun An.

Beginning the day with a two-shot lead, Thomas bounced back from a bogey at the par-three second to hole a 20-footer from the fringe at the next and then birdie the ninth to reach the turn in 35.

Byeong Hun An briefly moved alongside Thomas after a following a front-nine 34 with a chip-in birdie at the 10th, only to triple-bogey the next after finding trees off the tee.

Lee got within one of the lead until dropping three shots in the first two holes of his back nine, as Thomas posted birdies either side of a blemish at the 13th to move three clear.

Thomas rolled in a 12-footer at the 16th to retain his advantage over Lee, who birdied the 12th and 15th, only to find the water with his second shot into the par-five last.

The 2017 champion then found the rough at the back of the green and got up and down to avoid dropping more than one shot, as Lee drained a 60-footer from over a ridge to make an unlikely eagle.

English pair Ian Poulter and Tyrrell Hatton are in the group six off the pace in tied-seventh that also includes Graeme McDowell and US Open champion Gary Woodland, while world No 1 Brooks Koepka withdrew ahead of his third round after aggravating a knee injury.

Who will win the CJ Cup? Watch the final round live on Sunday from 3am on Sky Sports Golf and Sky Sports Main Event!