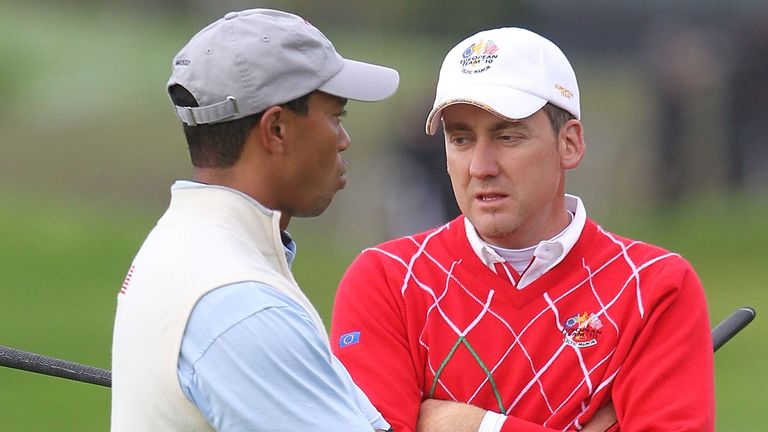 Ian Poulter earned his "Postman" nickname after a famous interview ahead of the singles matches at the 2010 Ryder Cup, but did you know Tiger Woods was listening in?

Tim Barter interviewed Poulter ahead of his singles clash against Matt Kuchar, who was unbeaten in his three matches heading into a Monday finish at Celtic Manor, and the confident Englishman defiantly predicted: "I guarantee a point ... I will deliver a point for Europe."

But what is not so well known is that Woods was watching the live coverage in the USA team room and raced off to the practice range to inform Kuchar of Poulter's comments in an effort to motivate his team-mate in a pivotal fifth match out.

🗣️ "I'll deliver a point." @IanJamesPoulter didn't sit on the fence when offering his pre-match prediction for @RyderCupEurope! 😲

📺 Watch the 2010 Ryder Cup now on Sky Sports Golf, ahead of a live #SkyWatchalong from 5.15pm! pic.twitter.com/CMpkWlAzrz

"Barty" revealed the events during our latest live Watchalong as European captain Colin Montgomerie, vice-captain Paul McGinley and US Open champion Graeme McDowell reflected on a tense final day at the Welsh resort.

But despite "loading pressure on himself", Poulter was true to his word and stormed to a 5&4 victory over Kuchar, who was ranked just outside the world's top 10 at the time, with McDowell clinching the decisive point following a spirited late fightback from the visiting team.

Watch the video above to hear Tim Barter looking back on one of his most famous Ryder Cup interviews ...