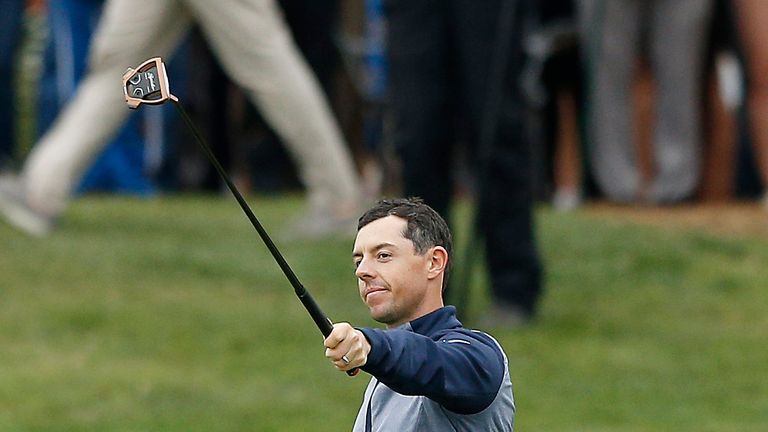 Rory McIlroy's success is rooted in the fantastic facilities and courses that are available to him in Northern Ireland, says 2011 Open champion Darren Clarke

Darren Clarke believes Rory McIlroy's success on the major stage is testament to the golf courses and facilities available in Northern Ireland.

Royal Portrush will return as an Open venue for the first time in 68 years at The 148th Open in July, when the world's best golfers will vie for the Claret Jug.

2011 Open champion Clarke says McIlroy, who won golf's original major three years later, resonates beyond the wider golf following and the Players champion is a "wonderful ambassador" for the country.

Northern Ireland also boasts Graeme McDowell, who won the 2010 US Open, as a major champion and Clarke says their triumphs on the biggest stages have helped promote the sport.

"We have a lot of column inches in the newspapers. It has always had huge coverage.

"We are fortunate that we have had so many major champions of late coming through there.

"We have got Rory McIlroy who is probably one of the most recognisable faces in the world. He transcends golf and Rory is a wonderful ambassador for Northern Ireland... Graeme McDowell as well, and others.

"But I think because of that and their success, it highlights the golf courses and the facilities that we have even more."

The Irish Open, which four-time major winner McIlroy had hosted since 2015, has always enjoyed big crowds and has formed part of the Rolex Series since 2017.

Clarke says the excitement over this year's Open is like no other previous edition, with the practice days - where tickets are still available to buy - offering a great opportunity for fans to watch the professionals and sample the great atmosphere.

"The Irish people have always been huge supporters of golf in Ireland," he added.

"The Irish Open has always been massively well attended, wherever it may have been throughout the country.

"To have The Open Championship coming up is a massive event and to have it at Portrush... the Irish people are even more excited, because it is right there on their doorstep."