The Open: Justin Harding and Rich Beem struggle in bunkers at Royal Portrush 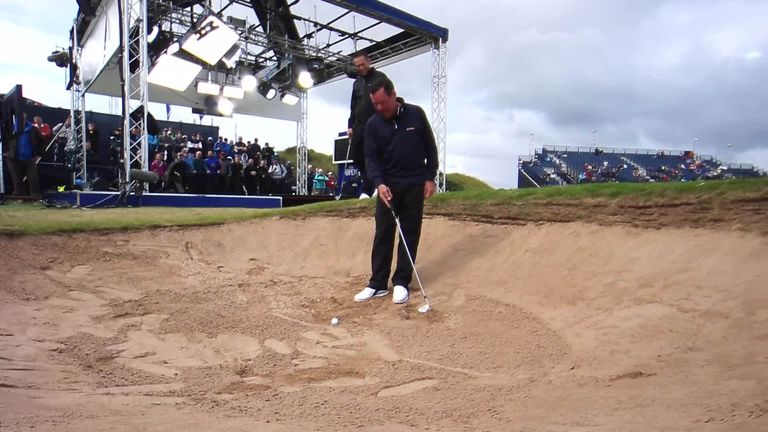 Rich Beem had a torrid time trying to demonstrate how to hit out of a bunker at the Open Zone!

Royal Portrush punished many of the world's best golfers in the first round of The Open, but Justin Harding suffered his own mishap in one of the light-hearted moments around the Dunluce Links.

The 33-year-old South African found a plugged lie in a fairway bunker, with the ball well above his feet, at the par-four fifth hole.

Harding took a full swing at the ball but lost his footing and took a hard tumble back into the bunker. As if that was painful enough his ball remained in the sand.

But the Qatar Masters champion managed to get out of the bunker with his next shot, as he eventually walked off with a double bogey six on his way to a level-par 71.

Meanwhile, Sky Sports pundit Rich Beem also endured a torrid time trying to demonstrate how to hit out of a pot bunker at the Open Zone.

The 2002 PGA Championship winner explained how best to go about executing a shot from the fairway trap but didn't have such great results!

Beem left it in the sand no fewer than two times before finally clearing the bunker on his third go to great amusement from the watching fans.

As Harding later said after his first round, "Golf is hard".

Watch the video above to see Justin Harding's heavy fall and Rich Beem's own travails in the bunker at the Open Zone!